3 more players retired due to concussions

To go along with Samples. Really have to question last year’s training and practice methods with this many concussions and forced retirements. CMA has already said that they won’t be doing what they did last year.

That’s unfortunate for the players impacted. Since they are dropping off the roster does it open up additional scholarships?

Not good at all. Not sure what impact these players would have made this year.

Yes, that does open up scholarships which (I believe) gives Houston 6 scholarships now to work with this year. (Edit to add: the players stay on scholarship, but it no longer counts against the roster)

Johnson would have been in the mix for Tight End; we’re hurting on depth there as we only have 2 scholarship players this spring and 1 signee coming in the summer.

Thomas was a senior who didn’t play last year (probably due to injury) and played limited time the previous 2 years due to injury, but would have been added depth on a depleted OL

Idumwonyi would have been in the mix at LB and special teams, but hadn’t played so far in two years (probably due to injury). We’re short on depth at LB so he probably would have gotten a chance.

This is a huge problem and a major grey area. What does this means? Was our prior Coach breaking the ncaa rules and is the ncaa going to look into this? We are talking about players safety impacting the rest of their lives. What is he doing at uta?
One of the main reasons that players and Coaches are against more NFL games is primarily for that reason.
Belicheatchick will often have training sessions without pads or contacts. He does it for safety but also for his players to see him in a better light. Pete Carroll is a great Coach but he goes the opposite way and did the same thing at USC.

That’s good to know. It did seem a lot of the time last year that we were “beating” up ourselves more than the other teams.

Thanks pray10 for all the leg work you do around here, really appreciate it.

Studies have shown that the concussions are a smaller part of the overall problem. Even if by some miracle you eliminated all concussions, a larger percentage of the players will still suffer from CTE. The only choice is full disclosure from little league on up to the NFL and allow the parents to make an educated decision on whether to let the kids continue to play or to take football out of public schools. With all the CTE information coming out, if public schools don’t educate the players and parents of the risks, they are setting themselves up for major lawsuits down the road.

Great points Jimmy. The future of the game is in the balance. That’s what’s at stake.

It really does look like Herman was out for Herman, damn the costs. His goal was to win at all those costs. But you can win without putting lives at risk. That’s the path CMA seems to be on. 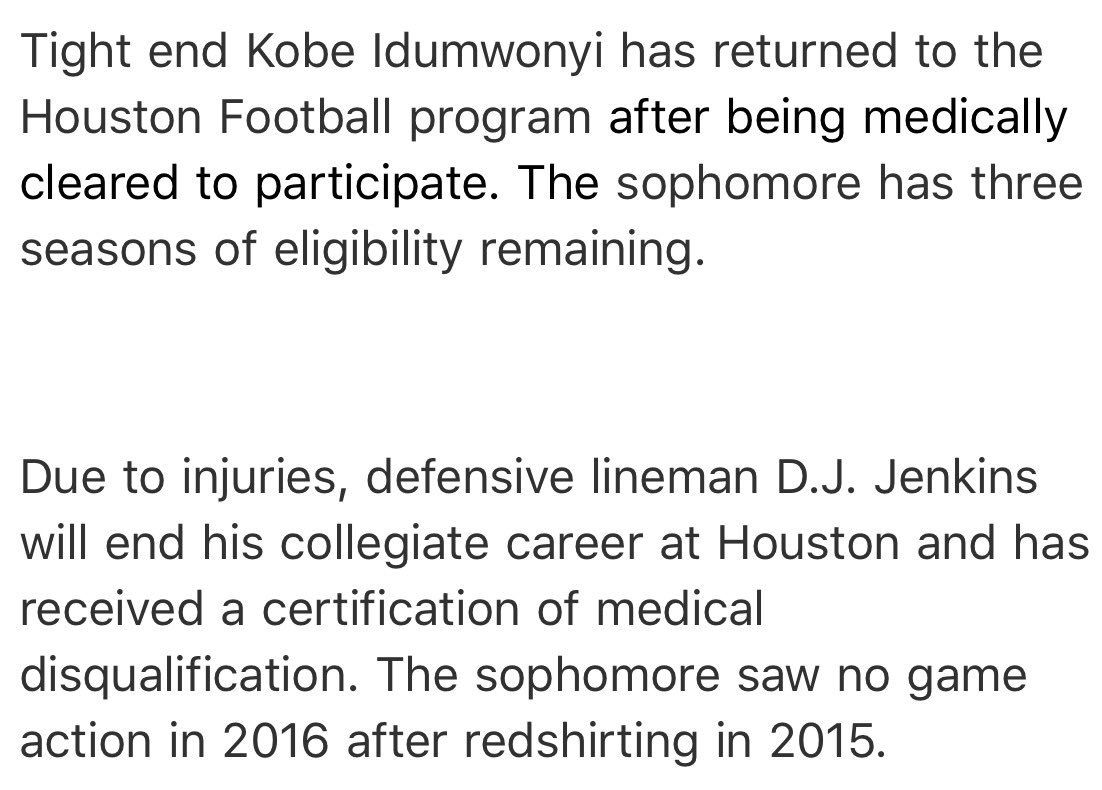 Nice to see Idumwonyi get cleared; and wish the young man luck. He’ll bring some much needed depth to the tight end position.

Sad to see Jenkins go. Hopefully he can stick it out and get his degree.