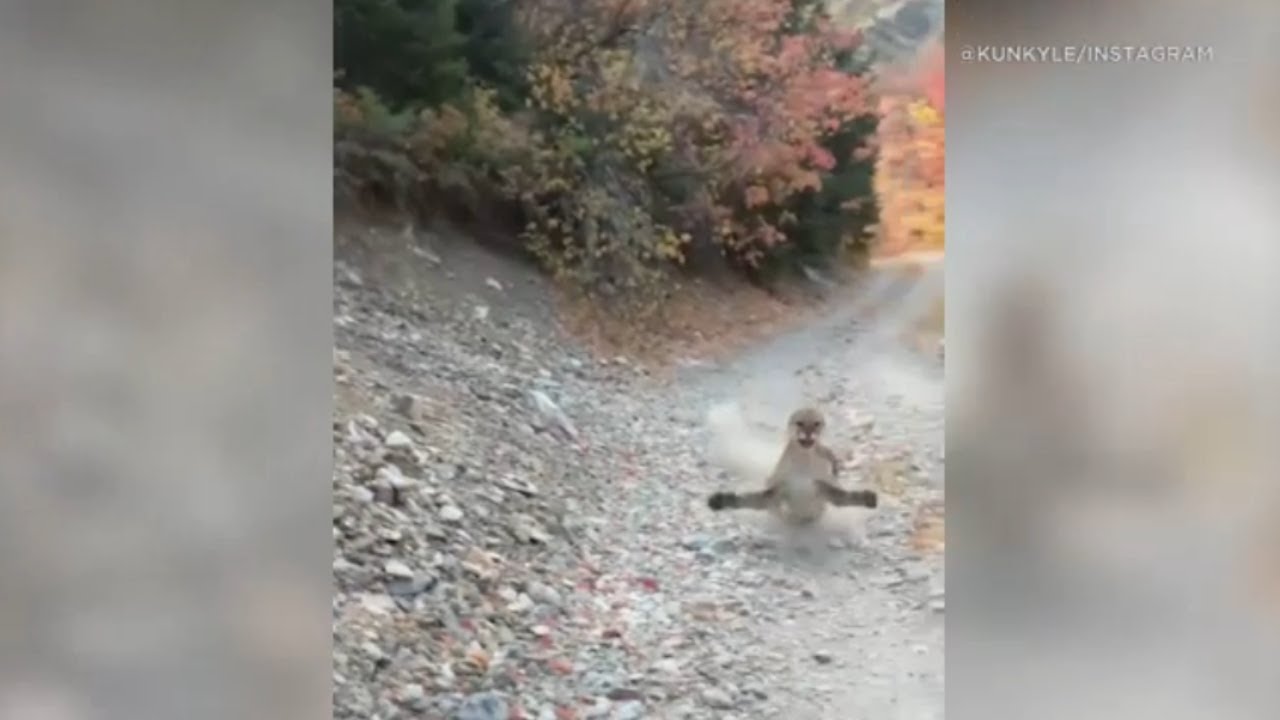 That was crazy scary. If he had tripped walking backwards it would have pounced.

That Cougar has lost its fear of humans.

The uncensored version is better, I laughed so hard watching it. Not sure why it took him so long to throw a rock at it. No way I would be wasting a hand with a phone if that happened, I would get ready for a fight.

I read a few " the rest of the story" articles. He came across the mother cougar and her cubs. This was not stalking but protecting her cubs. If it was stalking he would not see her until the cougar pounced.

Regardless, not an encounter I would want to experience

I was wondering if rock throwing was a good choice. I saw a theory that rock throwing gave our ancestors the advantage against prey like this, but that was in a group setting. Could throwing the rock backfire and cause the cat to attack?

I dont want to have to find out but from articles I read it said, yes, throwing a rock will scare it off.

I would have picked up a big rock and a small rock. Throw the small rock and have the big one ready to bash the head if attacked. He was smart to not turn his back. It was clear to me early on that the cougar was just trying to scare him away. I have gotten “attacked” by a number of dogs out on runs and just stopping and facing them has worked every time. I might have to walk away backwards sometimes. I’m not worried about the dog chasing me who is barking, I am worried about the time the dog is going after me and not barking! J V is right about the cougar would have got him before he knew it was there if it really wanted a fight.

It would seem that throwing rocks would do some good. I’d be yelling at her too.

I would also have one of those bigger rocks in my hand ready to bash her head if she jumped on me.

Should have thrown his phone…oh, nevermind…if he had thrown it how would it go viral…its all about the likes.

I have my phone out when i walk home at night. That’s my weapon of discouragement, try to rob me, I’ll film it. Won’t work on all cougars

I could see trend of people going to the mountains to get something similar caught on camera. Some people will do anything for the views.

I have seen a few news articles of people falling to their deaths trying to get that perfect selfie.

Somewhere… someone is saying.
“I have a great idea to get views…let me get between a mama bear and her cub…it will be awesome!!!”

I would suggest loud profanity and rocks or whatever you have. Deescalate.

If you notice when it was bluffing, they attack with those claws. Block and kick last resort.
I’ve heard reports of sightings in the neighborhood and I live in the middle of Colorado Springs.

I was wondering what that move was, I had never seen the kicks in front like that. Really weird, bluff is a great term for it because that cougar could have totally leaped on him. This wasn’t stalking, this was defending.

Bears can do the bluff charge, either example if you run you will get mauled.

Wow it made it to TMZ, they too list it as Hiker stalked by Cougar

There is a pretty good book by Max Brooks. The guy who wrote WWZ. Called Devolution. Not as good as WWZ but not bad. WWZ is nothing like the movie, that book was really good. It involves big foot and a small isolated community.

He got the idea from a story he read about a community that put in a nice green space in town. It drew in deer and then mountain lions. The town thought it was cool to see the mountain lions until it they stopped being scared of humans and pets started disappearing and it attacked a child.

Pretty f ing calm if you ask me.