Joshua Atkins committed today ! Nice commit for our OL. 6’4”. 280 tackle. Has played both offensive and defensive tackles but Is being recruited for OT

Joshua Atkins (@joshuaatkins88), 6-4,290 OT from Mansfield Timberview (@TimberviewHigh),announced on Twitter he’s committed to @UHCougarFB (2021 Class): “That’s pretty big for me. It’s exciting” (How about for his family?) “They don’t have to pay for college. So they’re pretty..” https://t.co/RSOSFewLPP 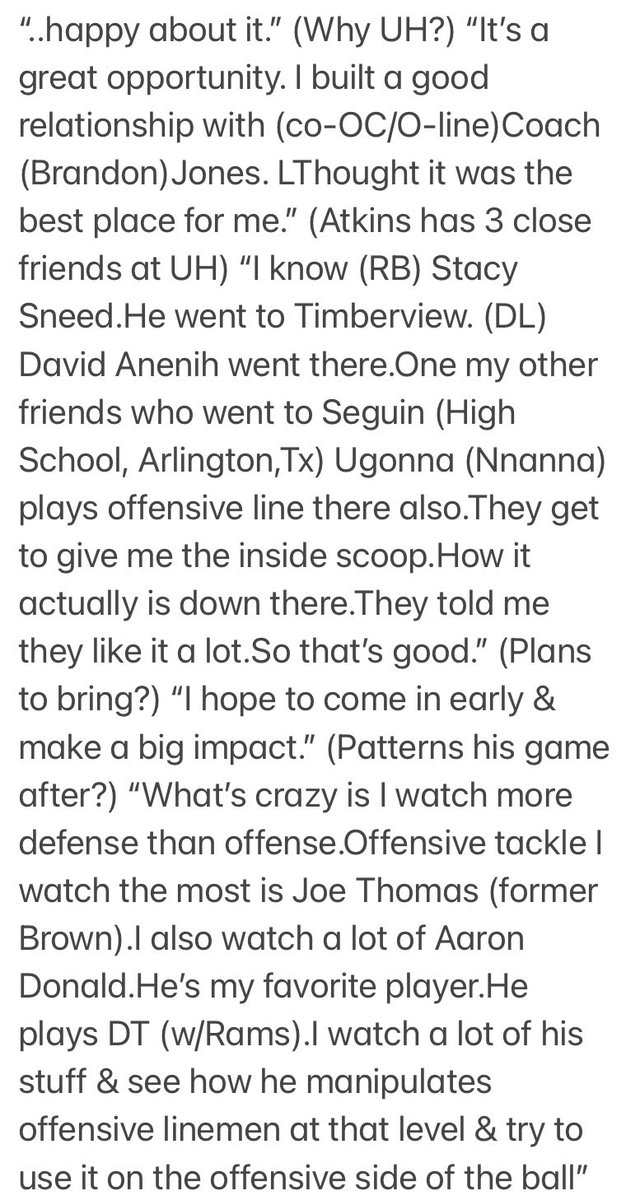 Our O-Line definitely needs as much talent as we can get.

Another BOOM. Things are starting to roll!

He looks like an awesome D-lineman to me! Probably even better than an O-lineman!
Here’s his highlights if anyone wants to see:

Anyone know if this was the news brain ealy was tweeting about today? He never followed up on it so I thought there might be something else?

I’m pretty sure it’s not the guy Early is talking about.

He made a good choice.

Two-sport athlete in football and track and field (shot put). 2020: Played both ways as a senior. 2019: First-team all-district selection as a junior.

What got my attention was “shot put”. Awesome get.

When I was in high school, all football backs, ends, etc., had to be on the track team. Since I was a 130 pound fullback/linebacker that was slower than snails, I had to put the shot and throw the javelin. I never won anything, but I came in second in several meets. OK, they were dual meets with me and another guy, but I was still second.

Good pick up. We need more linemen coming from HS, not the portal.

Im hoping its about austin uke the Episcopal lineman. That guy is a beast. But all the predictions have him following stone to smu