The Houston Cougar Mens and Womens Track & Field teams will head out of Houston for the first time during the outdoor season at the 90th Clyde Littlefield Texas Relays. The 4-day event will run March 29-April 1 at Mike A. Myers Stadium. Meet ...

DECATHLON TO START
The first Cougar in competition at the Texas Relays will be decathlete Nathaniel Mechler. Mechler, The American champion in the heptathlon, enters the 2-day, 10-event competition at 11 a.m., Wednesday with the 100-meter dash. The Ontario, Canada, native will also compete in the long jump, shot put, high jump and 400-meter dash on the first day, before finishing with the 110-meter hurdles, discus, pole vault, javelin and 1,500-meter run on day two.

ON THE STRAIGHT TRACK
The Cougars will have six competitors in the 100-meter dash at the Texas Relays. Beginning Friday morning, Bria Carter and Justice Henderson will run in the preliminary rounds of the women’s University/College edition of the event, while John Lewis III and Cameron Prejean will run on the men’s side.

Henderson enters the event ranked No. 71 in the NCAA for women, while Carter ranks No. 76. Lewis and Prejean enter No. 21 and No. 76, respectively.

Qualifying athletes will advance to the final round of the University/College races on Saturday, while Cameron Burrell and Mario Burke will each be on the track for the 100-meter dash invitational. Burrell enters competition with the No. 3 time in the 100 nationally, while Burke holds the 24th fastest mark.

OVER THE HURDLES
Four Cougar hurdlers will be in action at the relays in Austin. Junior Kelsey Roy and sophomore Amere Lattin will run on the straight track in the 100- and 110-meter hurdles, respectively, while sophomore Raymund Clarke and freshman Birexus Hawkins will run in the 400-meter hurdles.

Hawkins will be the first Cougar on the track on Thursday at 4:30 p.m., in the preliminary rounds, while Clarke will follow at 5 p.m. Lattin enters with the nation’s No. 6 time in the event, and he will run simultaneously with Roy on Friday morning.

FROM LONG DISTANCE
Houston will field five individual distance runners throughout the week. Chris Ibarra will run the shortest of the distance races in the 800-meters, while Jennifer Dunlap and Blake Contreras will run the women’s and men’s 1,500-meter races, respectively.

The reigning American Athletic Conference outdoor champion in the steeplechase, Selena Sierra, will make her return to the 3,000-meter event on Friday, while Maddie Brown will compete in the 5,000-meters to wrap the second day of competition.

Junior Tonye’cia Burks will compete in the ‘A’ section of the women’s triple jump. Burks jumped 43-5.0 (13.23m) at the Victor Lopez Classic a week ago to break the school record and post the No. 2 time in the nation. In the men’s triple jump, sophomore Cameron Prejean will enter the triple jump ‘B’ section, while sophomore Colin George will enter the ‘B’ section of the high jump with the nation’s No. 63 mark this season.

THROW IT FAR
A pair of hammer throwers opens field competition for the Cougars on Thursday morning. School record holder Mikaila Martin will throw in the ‘B’ section for the women at 11 a.m., while senior Damon Thompson will follow for the men at 2 p.m. Thompson enters with the 84th best throw this season.

Junior Cameron Cornelius will put his winning streak in the shot put on the line in the ‘A’ section at the Texas Relays. Cornelius enters with the No. 8 mark in the nation this season, and he has won seven straight competitions, including two on the outdoor circuit. He will be joined by teammate Alex Garza who will make his 2017 outdoor debut at the event.

The Cougars will enter a pair of throwers in the ‘B’ section of the shot put. Sophomore Nora Monie will throw the disc for the women, while junior Zach Oliva competes on the men’s side.

RELAY SQUADS
Seven different relays will take to the track this weekend for Houston, including the men’s and women’s 4x100-meter squads. The Houston men enter the event with two separate teams inside the top-10 in the nation, including Lewis III, Burke, Jacarias Martin and Lattin who ran 39.37 a week ago to rank No. 3 in the NCAA.

Good position for Melcher; his strongest events are during the second day. FIVE TODAY, FIVE TOMORROW
Mechler began his day in the 100-meter dash, where he ran 11.05 to finish 12th and pick up 850 points. The freshman would pick up valuable points in the second event of the day when he jumped 23-6.0 (7.16m) on his final attempt of the long jump to place fifth and score 852 points.

Mechler wrapped day one of the competition with a fourth place finish in the 400-meter dash in 48.36. The mark for Mechler earned him 892 points and gave him 3,835 through the first half of the event. The second day of the decathlon begins with the discus at 10:45 a.m., Thursday.

SIERRA LEADS THE PACK
Sierra posted Houston’s top finish of the day, with her third place effort in the women’s 3,000-meter steeplechase. Sierra, the school record holder and 2016 American Conference champion in the event, crossed the finish line in 10:40.85 to claim the bronze.

TWO DAYS, 10 EVENTS
Freshman Nathaniel Mechler began Thursday’s action with the final five events of the decathlon. Mechler started the day with 3,835 points and opened with a ninth place finish in the 110-meter hurdles in 15.11 to collect 836 points.

From there, Mechler would garner 558 points in the javelin with a best mark of 157-3.0 (47.93m) to enter the final event ranked 10th with 6,491 points. Mechler finished strong with his best finish of the weekend, running 4:27.04 to finish third in the 1,500-meter run. The finish for the Ontario, Canada, native gave him 7,255 points and moved him to seventh in the competition while posting the No. 9 decathlon total in the nation this season.

THROW DOWN THE HAMMER
Houston had a pair of throwers enter the hammer throw competition on Thursday. Sophomore Mikaila Martin was in the ring first in the women’s hammer, where her top mark traveled 179-4 (54.67m) to place her 13th overall. Senior Damon Thompson followed in the men’s edition with a top mark of 180-5 (54.99m) to finish 23rd.

HURDLES TO OPEN
Running action on Thursday kicked off with the 400-meter hurdles, where Houston fielded a competitor in each of the men’s and women’s races. Freshman Birexus Hawkins won heat seven of the women’s race in 1:01.65, placing her 38th overall. Sophomore Raymund Clarke would also win his heat in the men’s edition of the race. Clarke crossed the line in 52.16 to take heat five and finish 13th overall.

DISTANCE HIGHLIGHTS THE NIGHT
Thursday’s Texas Relays were all about the distance races, beginning with the invitational 800-meters to open the evening session. Junior Chris Ibarra finished 11th in the competition after running 1:54.39 in the 2-lap race.

Jennifer Dunlap was the next Cougar distance runner on the track, in the women’s 1,500-meter run. Dunlap clocked a 4:39.65 to finish eighth. In the men’s version of the race, sophomore Blake Contreras ran 3:59.94 to place 11th overall.

Sophomore Maddie Brown capped the evening of the second day in the women’s 5,000-meter run. Brown ran the Texas Relay’s longest event in a personal-best 17:09.66 to finish 13th.

Sophomore Trumaine Jefferson won the long jump, and Amere Lattin and each of the mens and womens 4x100-meter relay teams qualified for Saturdays finals on the third day of the 90th Clyde Littlefield Texas Relays, on Friday.

JEFFERSON’S LONG LEAP
Jefferson left a big mark at the Texas Relays, winning the ‘B’ section of the long jump. The Killeen, Texas, native used his fifth attempt to jump 25-3.5 (7.71m) and claim gold in the competition. Jefferson’s mark was wind-aided, however moved him to No. 6 on the NCAA list this season.

RELAYS RUN ANOTHER DAY
Friday’s qualifiers kicked off with the 4x100-meter relay, where the Cougars entered a team in each of the men’s and women’s races. The women opened the event in Heat 5 where Justice Henderson, Sierra Smith, Brianne Bethel and Tori Williams ran 44.91 to qualify sixth overall for Saturday’s final.

The men’s team of John Lewis III, Mario Burke, Jacarias Martin and Cameron Burrell were on the track in Heat 3. The squad crossed the line in 39.77 to win the heat and qualify fourth overall for the final round.

LATTIN HURDLES INTO FINALS
Sophomore hurdler Amere Lattin became the first Cougar individual to qualify for the finials of an event on Friday. Competing in Heat 4 of the 110-meter hurdles, Lattin crossed the line in a wind-aided 13.87 to finish second in the heat and qualify fifth overall. Lattin’s time moves him to No. 6 in the NCAA this season, and will be in action in the final at 2:35 p.m., on Saturday.

BURKS JUMPS INTO TOP-10
Just one week removed from her school record breaking performance in the women’s triple jump, junior Tonye’cia Burks was back on the runway at the Texas Relays. Burks qualified for the final on her first jump with a mark of 42-0.0 (12.80m) before improving to 42-9.0 (13.03m) in her fifth jump to finish seventh.

SLINGING THE DISC
Junior thrower Zach Oliva opened Friday’s competition for the Cougars in the men’s discus. Oliva qualified for the finals and picked up his top mark on the second throw after launching the disc 161-8 (49.29m). Oliva’s mark placed him seventh in the competition.

TOP-10 IN THE RELAYS
The Cougar women fielded two more relay teams on Friday, competing in both the 4x400-meter relay and the distance medley relay. In the morning session, the 4x4 squad of Birexus Hawkins, Nikesha Keith, Brianne Bethel and Sierra Smith ran 3:44.11 to finish 10th.

Houston fielded a team of Jennifer Dunlap, Nikesha Keith, Britani Gonzales and Jahnavi Schneider in the DMR for the final event of the night. The squad clocked an 11:55.71 to finish 10th.

THE BEST OF THE INVITATIONAL
In the final event on the track, Houston’s 4x400-meter relay team of Amere Lattin, Raymund Clarke, Mario Burke and Trumaine Jefferson put on a show in the invitational version of the race. The team crossed the finish line in 3:07.15 to claim the victory and move to No. 5 in the NCAA this season.

LATTIN BACK ON THE TRACK
Lattin was also in competition for the finals of the 110-meter hurdles on Saturday. After qualifying with the fifth fastest time on Friday at 13.87, Lattin improved on his season-best mark to 13.79 to finish fourth. The mark for Lattin moves him to No. 4 in the NCAA this season.

MONIE IN THE TOP-5
Sophomore thrower Nora Monie opened the final day of action for the Cougars competing in the women’s discus. Monie’s third attempt traveled 160-4 (48.86m) to qualify her for the finals and set her top mark of the competition to finish fourth.

Bethel, Smith and Williams teamed with freshman Birexus Hawkins in the 4x200-meter relay where they also posted a fourth-place finish. The squad ran 1:34.84 to win the first heat.

The men’s 4x800-meter relay team of Chris Ibarra, Cameron Laverty, Drake Murphy and Nicholas Hamilton were the first Cougars on the track on Saturday. The team ran 7:41.74 to finish eighth in the event.

SAMUELS POSTS PR IN LONG JUMP
Freshman Samiyah Samuels posted a new personal best with her third attempt of the women’s long jump ‘A’ section. Samuels leapt a wind-legal 20-6.25 (6.25m) to finish third and move to No. 4 on the NCAA outdoor list.

CORNELIUS TAKES THIRD IN SHOT PUT
Junior thrower Cameron Cornelius was the final Cougar in action at the Texas Relays. Competing in the ‘A’ section of the event, Cornelius threw 59-2.75 (18.05m) to finish third.

Houston's Amere Lattin shattered this hurdle during warm-ups for the 110s. Then ran a 13.79 that was good enough for 4th. #TexasRelays https://t.co/dmk93I602i 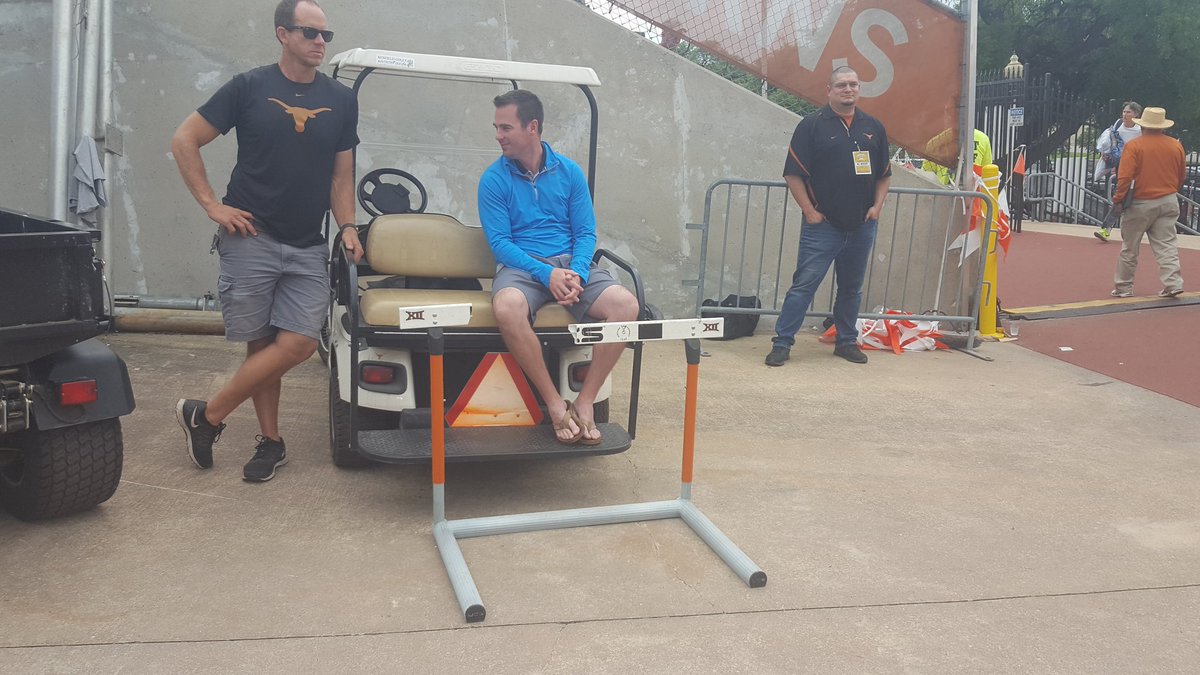 That hurdle had it coming😂😂 twitter.com/aasdanny/statu…

Running in lane 7, @UHCougarTF men's 4x100m relay only runs 1 leg before getting a DNF due to not passing the baton in time @TheDailyCougar https://t.co/TWmBgokZj5

Trust in your Trainning and believe in the process. #WEHERE #HoustonIsSpeedCity this is our year
pray10 (Patrick) April 3, 2017, 8:47am #7

I would like to give a big shout out to @UHCougarTF, Team Perfect Methods @SHONic_ , and meet director James Barr, for a great Texas Relays.