I realize we are more likely to get some as we enter the summer and have some camps, but I would love to get a quality boom or two. It would be a nice way to set the table. 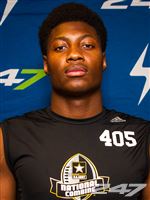 Not sure when his spring game is scheduled, but he set to commit on that day. We’re in his top four.

Getting someone like Mayden would set up the rest of the class nice. He plays the most important position in football.

I may be wrong but I think his announcing date is May 23, and not March. I don’t think we’ll have the excitement we had last year when it came to early commits. A lot of that was due to being the hot program coming off a Peach Bowl win mixed with a coach who was doing everything he could to show he could recruit at a P5 level (early commits mean higher ranking early on and may have promised some that he’d take them with him if he left) mixed with some expectation that we’d be in the Big 12.

We have none of that now, but that’s OK. Last year’s early excitement ended up being smoke and mirrors. Rather have substance and I think we’ll have a solid class and far less decommits.