Don’t Hold Your Breath On Realignment To Save Your Team

For all of you guys that always say, add UH plus other schools to a P5, it’s not going to happen unless a school brings value to that conference. This means a G5 would need to bring in a full share plus more than 5% increase to each school.
IT’S ALL ABOUT MONEY! 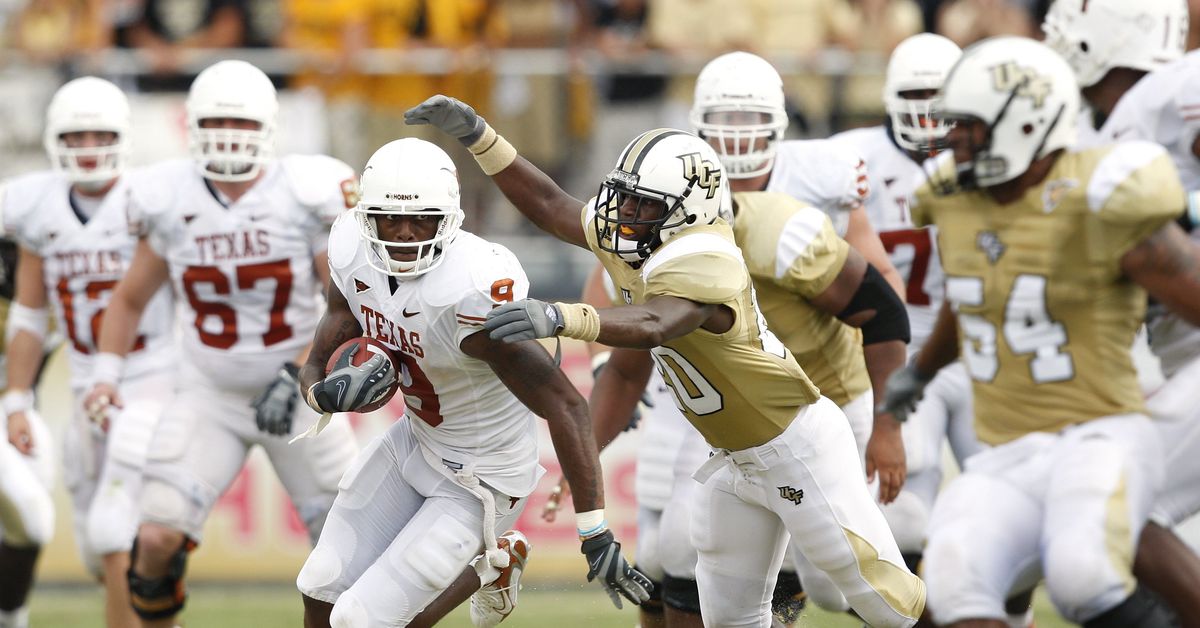 Don’t Hold Your Breath On Realignment To Save Your Team

Getting an invitation to a Power 5 program may seem like the perfect way to get your favorite program a seat at the big boy table. The problem is, it’s never going to happen.

The ACC, B1G Ten, and SEC are full with 14 teams each. The PAC 12, isn’t reasonable geographically unless you’re in the Mountain West. Besides that, they’re struggling to find value as it stands now. Meanwhile, the Big 12 is adamant that they don’t want to expand their conference.

Frankly, why should they expand?

You expand your conference to do one of a few things. The first, is to add value. This brings in much larger media deals, which means each program gets more money.

Until these G5 programs create enough value within themselves, a conference like the Big 12 won’t come calling. Think about it like this, if each Big 12 team is worth $20,000,000 a year in a media contract, and UCF’s value is $10,000,000. Why would they invite UCF? UCF would not bring more revenue to them, and they would only be forced to cut their shares down by about a million dollars a season.

Simply, no G5 school is worth a P5 invitation.

Once you accept this, you can focus on one problem in a team effort. The conference, in this scenario the AAC, needs to raise its reputation to be on par with the P5 conferences. By doing this, you can build your own fan base up. This will raise everyone’s value, garner larger media contracts, and earn you a seat at the table.

It’s a long, slow, process. Oftentimes, it seems unfair. You can beat P5 teams more often than not. You can win New Year’s Six games, and even have an NCAA recognized National Championship. It still takes years to get the respect you deserve.

This is precisely the point I have been making multiple times. Financially i never saw the math working in favor of any P5 expanding with any G5 program/s.

Looking at it another way, if the Big 12 were to expand by 2 programs, this year their total media payout would have to grow by $70 million just to keep expansion revenue neutral.
ESPN is paying $80 million a year for all of AAC! It’s in no ones interest (except the G5 programs) for the P5 to expand.

Financially i never saw the math working in favor of any P5 expanding with any G5 program/s.

I did see the math with the PAC12 adding UH but only if they could get the PAC12 Network in almost every home in Texas collecting premium subscription fees. We know that is highly unlikely now.

I did see the math with the PAC12 adding UH but only if they could get the PAC12 Network in almost every home in Texas collecting premium subscription fees. We know that is highly unlikely now.

That too is suspect. Why would cable providers in DFW, El Paso, San Antonio agree to charge their customers the full premium rate?

Houston and it’s surrounds makes sense, unfortunately UH is not yet a big enough brand in Texas to be able to command that kind of support. Plus it’s complicated by the fact that the SEC network is already charging premium rates in Texas and the SEC has a much larger following in Texas than the PAC 12 does.

I know too many Houston fans that would not pay for the pac12 network and would start threads about how to watch it on a redit link.

Well, now we’ve heard from Dan Morrison. I was wondering what Dan thought about this.

Not much analysis here. He dismissed the PAC 12 expanding with anyone other than the MWC with no discussion.

And while anybody who’s slightly educated would agree a business won’t expand unless it can increase profits, I think there’s more to the analysis. Dan Morrison doesn’t seem to think so.

Hmmmm. Maybe I should rethink things.

The article is overly simplistic, not particularly profound, and kind of weirdly timed in the middle of quarantine season.

But the general premise is right.

The only way we’re upgrading conferences is as a secondary domino. The most realistic scenario would be Texas and OU leaving for the B1G and then us getting in the leftover Big 12, which of course would then be a lesser conference but better than the AAC, especially if it’s something like us, Cincy, BYU and UCF joining the Big 12 leftovers.

Some other far out scenarios are if the expanded playoff guarantees a spot to P5 conference winners and that gets ND to join the ACC. Maybe we could be #16 there. Or maybe something happens like Texas going there as #16 and we get their spot in the Big 12. Or maybe the Pac-12 loses several schools to the Big 12 as rumored and we get in because they need a couple more schools for game inventory.

Houston plus other key P5s need to create a new league. I know of the penalties etc but is really our only solution. Partner with a Cable/TV provider & recruit enough Universities for a 10 or 12 team league. UH, UNLV, BOISE STATE, CINCINNATI, MEMPHIS, UCF, USF, BYU, SMU,TULANE & TEMPLE. NAVY for football &,WICHITA STATE for basketball. Trying to include large TV footprints, Geographic spread & cities that have tourist/entertainment attractions plus being on strong financial foundations.
Sitting around waiting to be asked is a killer. Unless there is a breakup of Big 12 & PAC 12 & a reassembling of those universities, we have no clear path forward. SEC, ACC & BIG 12 have no reason to add or change their profitable footprint. Thoughts?

The teams in p5 don’t bring that…these people knows nothing.

Years ago I advocated fixing our AAC first. It is actually a good conference

We need a team in the central or eastern time zone.

Who is that team? In a big area like Atlanta for instance.

… in this scenario the AAC, needs to raise its reputation to be on par with the P5 conferences. By doing this, you can build your own fan base up. This will raise everyone’s value, garner larger media contracts, and earn you a seat at the table.

How are we supposed to raise our reputation when the shady ESPN has labeled us as a “non-Power5” “G5” conference? Isn’t the reason why they did it is to create a more distinct difference between the network’s chosen conferences versus the ones they couldn’t care less about?

They certainly have made it impossible for any of the conferences unfortunately enough to be labeled “G5” to ever be able to climb out of that stigma and into the level of their chosen “Power5” conferences!

Non P5s can only survive if the cfp’s expand.

On their own merit, very few P5 schools would be valuated at these numbers. They only carry that value because of the major school that’s in their conference so it is fair to say that no G5 school can meet that mark.

The Big 12 Media value is set almost exclusively by UT, OU, and KU. Therefore it stands to reason that to raise value you need to add programs similar to UT/OU.

On their own merit, very few P5 schools would be valuated at these numbers. They only carry that value because of the major school that’s in their conference so it is fair to say that no G5 school can meet that mark.

Good point. UCF and UH are more valuable than programs like Wake, Vandy, and Oregon State. The analytics company the Big 12 hired had BYU and UH as the most valuable programs. Doesn’t mean we should expect an imminent invitation, but if there’s movement in ‘23 when contracts expire we’ll be as likely as anyone to benefit

UCF and UH are more valuable than programs like Wake, Vandy, and Oregon State.

We believe that’s true but those schools are already in the club.

I think UH will get a P5 invite the next round around 2023 or 2024. The Big 10 took Rutgers and Maryland for market share and I doubt they “initially” brought 30 or 40 mil to the table at first.They brought them in and those schools over time make more for the conf by “association”. UH prob won’t ever go to the Big 12 because of recruiting fear but other conferences will see our potential to grow bc of conf. association like Louisville, Tcu ,Rutgers and Maryland.

The Big 10 took Rutgers and Maryland for market share and I doubt they “initially” brought 30 or 40 mil to the table at first.

But those schools did bring in that much money because of the Big Ten Network being in New York metropolitan collecting those cable subscription fees.

Doing simple math, let’s say half of their 8M households have cable subscription with the Big Ten Network at $1 per month. That’s $4M a month or $48M a year. The Big Ten knew exactly what they were doing.

In addition, they had their basketball tournament in New York city for a couple of years that gave them great exposure in a basketball town.

TCU, Louisville, Utah, Rutgers, etc. would fall in the same camp as the other is discussing yet they made it. The author is over simplifying things as @TJCoog mentioned.

TCU and Louisville were bandaids. Rutgers and Utah aren’t the biggest brands in college sports. But they are the flagship universities for their respective states.