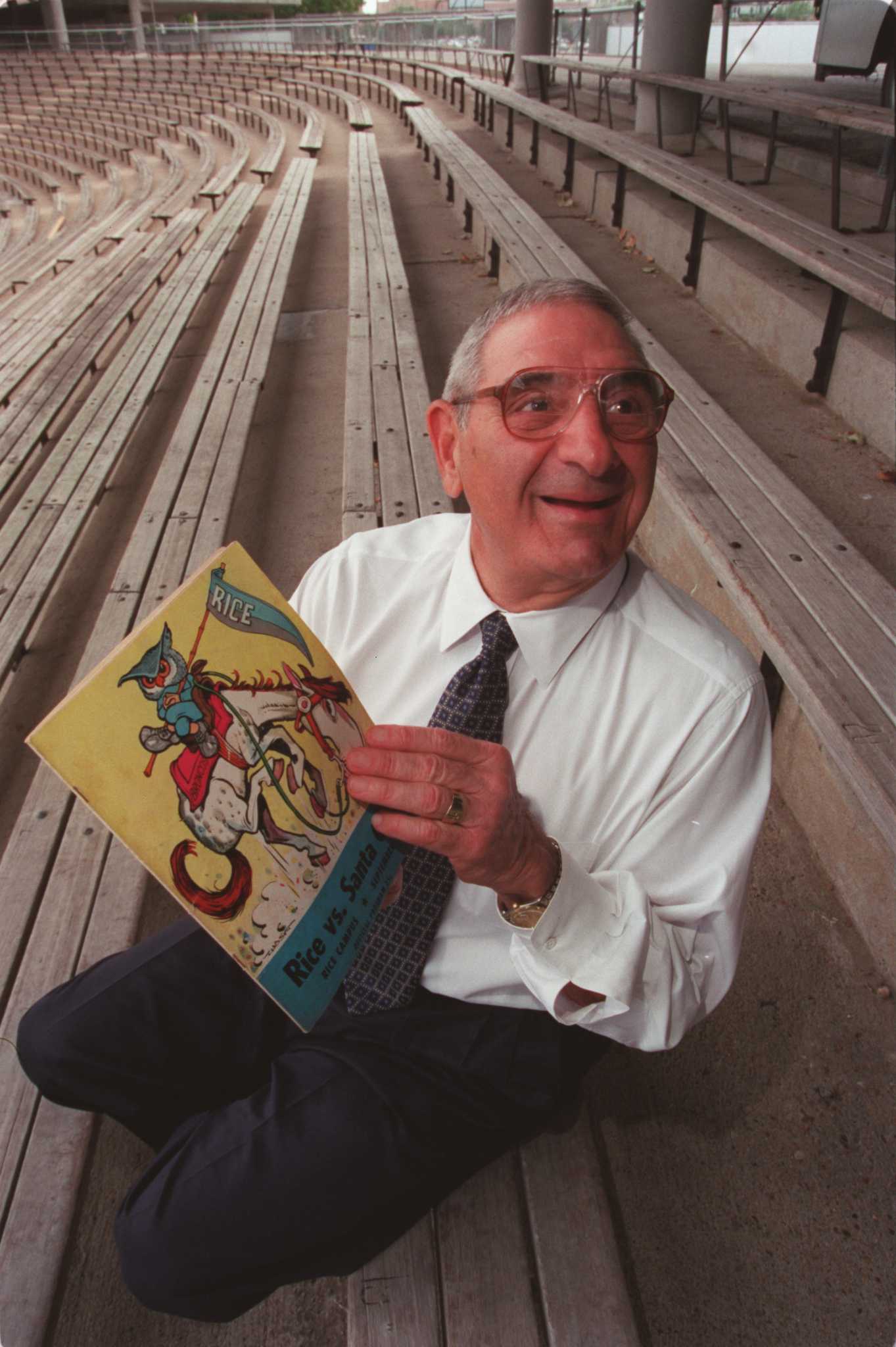 Fred Curry, the former Rice University football player who helped create the Bayou Bucket trophy that is awarded to the winner of the Rice-University of Houston football game, has died at age 89.

“A longtime member and past president of the Touchdown Club of Houston, Curry and his wife, Jann, paid $47.50 in 1975 to an antique dealer in New Braunfels for a brass bucket that became the centerpiece of the Bayou Bucket football trophy.” Have some respect. Seriously could have picked another time or thread to voice your dislike of the trophy name.

Fred Curry was a dear friend of mine. He loved football players and hated most football coaches. He kept the TD Club alive during the 80’s and early 90’s by his sheer will.

He coached Westbury FUN Football for 8 years. Some of his players went on to the NFL including the President of the Green Bay Packers, Mark Murphy and Aggie great Dave Elmendorf. His players are now CEO and Presidents of companies here in town and still called Fred “Coach”

The trophy was a way to generate more interest in the game. I’ve had the pleasure/unhappiness of handing it to both UH and Rice coaches. Nobody ever said it was silly except for some over opinionated fan board denizen.

The day before Briles left for Baylor, he attended a Texas Bowl presser announcing UH in the Texas Bowl. As we waited outside to go in (Texans were finishing their presser) Art said to me “you know Vaughan what the best day at UH was for me?” “No coach, what day was that?” “The day you handed that Bayou Bucket Trophy to me.” I said “yeah, that was a good day Coach” I didn’t understand why he said that until the next day when he left. His Brilesesque way of saying good bye. There’s a picture of me handing Art the trophy in the campus Pinks Pizza.

Fred Curry did a lot of good for the game of football in Houston. He worked with me on the Scholar Athlete Luncheon. After one year at Rice he did a Korean War stint in the Air Force. Jess Nealy, the Rice Coach tried to steal his GI Bill money so he left and went to UH. He got his knee taken out by a UH player who was worried Fred would take his position. Tom Wilson said it was the worst knee injury he saw in 42 years. He decided after rehab to go to UT where he got his degree.

Tuba Curry was one of the people that made Houston special

Great story, Chris. Thanks for sharing…

Thank you for the back story Chris…this is the kind of info which makes this Board special.
And Tradition matters.
And I hope we keep that trophy forever !!!
Beat Rice !!!

I was hosting David Baliff and the Rice coaches and wives at Mo’s during the Texas Bowl. Baliff and I got talking and I said “you don’t remember me but when we gave you the Bayou Bucket, I was the one who wouldn’t let go”. All the coaches started ragging me when they found out I was a Cougar.

“Well, we need somebody to polish the son of a bitch every so often”. Oh man, then the smack came flying. Great night.

V, Our condolences on the loss of your friend.

I get to deliver the eulogy tomorrow

Some here don’t like playing Rice, I enjoy it and wished it happened every year. As one of the older Coogs on the board, the Bucket was always a important game to me.

And the name of the trophy is also a good throwback to Houston’s earlier years and its our trophy game, that’s what you call tradition. The Bayou City’s Championship.

Agree. We should play Rice every year in football. Like it or not it is for the city of Houston.

I get to deliver the eulogy tomorrow

He was a special man with a heart of gold. He did great works for the TD Club.

Thanks Chris. Love these types of posts. Sorry for your loss. Go Coogs!

It should be our annual opener

I like the idea of it but I’d like to see Rice fans embrace the rivalry more. It has potential for some great game atmospheres if they would attend more consistently, even when the game is at our place.

I agree with a 7pm kickoff time…