I have always thought that when playing an FCS team, an top tier FBS team (which UH is) uses superior athleticism to win the game more than scheme or anything else. Only with the top FCS teams, do you really need to prepare for specific players and schemes. In essence, you go out to establish your offensive and defensive dominance.

With this week, Lamar is neither a good FCS program or a team we have to specifically scheme for. Do the coaches start implementing a game plan similar to the Cincy game plan without discussing the Cincy game to the players? It is a short week between Lamar and Cincy. Pulling starters early 3rd for rest and already having the foundation for what we want to do in the Cincy game implemented would be wise.

What do you guys who have coaching experience think the coaching staff will do internally?

Offensively I think Applewhite will want to establish the interior running game with Catalon then play a lot of the backup RB’s. Other than that it’s the same game plan offensively; the power run game sets up the deep passing game via play action with quick hitting screens and jet sweeps thrown in to make Lamar defend the entire field. Don’t call too many running plays for Ward.

Defensively, pretty much the same as Orlando has always done; blitz, blitz and more blitzing. He’s aggressive by nature. That’s why Herman hired him. The blitzing is just a part of their normal base packages.

Herman will treat this like any other game. That’s the culture he’s created. Each opponent is the same. Never get too high with the wins or low with the losses. That’s why I’m 100% confident we’ll never fall victim to a “trap game.” If we lose, it’ll be because the other team was better on that particular day.

Herman will treat this like any other game. That’s the culture he’s created.

I figured that would be the case with Herman. There is no coach-speak filter with him.

The game plan for Lamar will be play hard for four quarters and score more points than Lamar.

I was impressed with how our front DL guys were getting penetration all game long against OU. The problem was finishing the deal since Mayfield is so elusive. We have work to do on that front since we’ll see some more mobile QBs, most notably Lamar Jackson. If I’m allowed to look ahead just a bit, I don’t think our guys will have that problem with Cincy’s QB. From what I watched of their game against UT-Martin, Hayden Moore isn’t nearly as mobile as Mayfield. If we can get penetration against that OU offensive line, we’ll certainly get it against Cincy’s. And we’ll end up with a lot more sacks than against OU. And after shutting down Dalvin Cook and holding Perine and Mixon below 100 yards on the ground, I can’t see any of our remaining opponents running the ball effectively against us. Our game plan from here on out should be to remain completely focused on the goal…1-0 each week. The training and culture will take care of everything else.

One more thing, our young, inexperienced secondary gave up some big plays on busted coverages (and one incredible catch by Mark Andrews at the very end). Otherwise, they smothered those OU receivers. How many times did Mayfield have to run around in circles in the backfield to try to find open receivers, only to throw the ball away or scramble a bit? Or get harpooned by Matt Adams. I was super impressed with that secondary, who by pretty much a consensus (me included) was supposed to be the weakest part of this year’s team. Fellas, we are in for a special, special season. Let’s enjoy it!

Lamar’s running back Kade Harrington was a finalist last year for the FCS version of the Heisman Trophy. He rushed for 207 yards last night in a 38-14 loss to Coastal Carolina.

Cool “fun fact” Greg. I’ll use that in my game preview piece for later in the week.

With Ward nursing a sore shoulder (haven’t heard results of MRI yet) and Catalon a slightly sprained ankle, I would think the coach would strongly consider holding them out and getting them full speed for the Cincy game. We should handle Lamar with Postma and Car and also the other RB’s. It would shock me to see even another QB late. Senior running back Kade Harrington picked up right where he left off last season, scoring Lamar's first touchdown on a 59-yard run on the final play of the first quarter to give the Cardinals a 7-3 lead. Harrington added a 64-yard touchdown run... 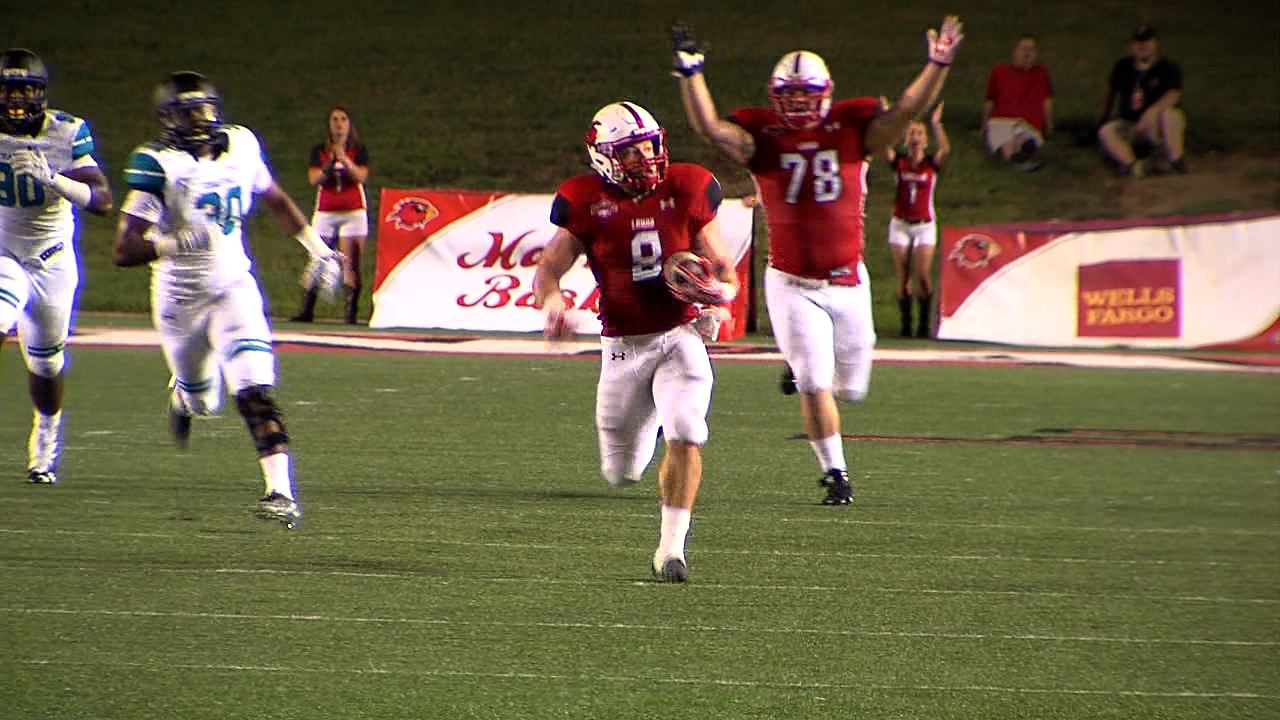 Coastal Uses Strong Second Half to Put Away LU

BEAUMONT, Texas – After being held to only three points in the opening half, the 16 th -ranked Coastal Carolina Chanticleers scored 35 unanswered in the second half to pull away from the upset-minded Lamar University Cardinals Saturday night at...

Looks like they got it to a lead (11 points at halftime) and then Coastal Carolina just steamrolled them in the second half to include 25 points in the 3rd quarter.

Harrington finished with 207 rushing yards and the two touchdowns but managed only 55 yards in the second half.