Houston attorney Gary Patterson says all charges against @BuffaloBills DT Ed Oliver, former @UHCougarFB star, stemming from his arrest May 16 in Montgomery County, are being dismissed. Oliver was arrested for DWI & unlawfully carrying a weapon : “The charges against Ed Oliver..” https://t.co/s4SzIER5m1 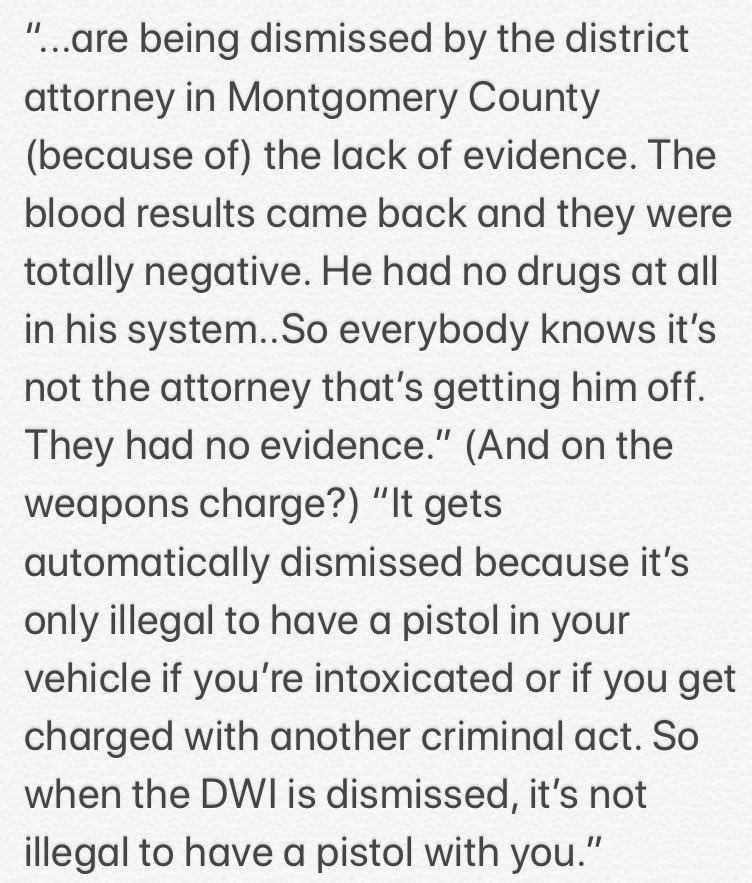 All charges have been dropped. Drug tests negative!!!

Wow that’s something to be proud of. Was he wearing his own jacket or did they even bother to investigate lol

I don’t believe that he is not guilty, what I believe is the he isn’t guilty because of his status and because he can pay for an attorney with connections in high places. No question, Justice is blind and my opinion is that he should pay the price for breaking the law.

If the tests came back negative, and as such, there isn’t evidence sufficient to convict him beyond a reasonable doubt, then he is PRESUMED INNOCENT under the law.

Yeah, if the blood test is negative, he’s pretty clearly innocent unless I’m just missing something.

Well that’s good for him.

This is an example of the system working the way it is designed. If there is a lack of evidence, the case doesn’t even get to trial. If blood tests come back negative, there is no evidence. Suspicion of a crime, or the fact that he was arrested is NO evidence. Even if there was some evidence, the state still has the burden of proving the case beyond a reasonable doubt. The state has a right to dismiss a case because of the poor quality of evidence that might exist.

And as a prosecutor that handles criminal cases as 100% of my practice, I can tell you that I’ve had to dismiss cases for lack of evidence on more than one occasion…especially when the labs come back negative!

Good news for him for sure.

Question about the “ beyond a reasonable doubt”
threshold thing. Does that standard apply to all crimes , misdemeanors and felony’s , or just most serious ( like murder) ?

ALL crimes (from the lowest level Class C misdemeanor traffic ticket to the highest level capital murder) must be proven beyond a reasonable doubt (95-99%).

In civil matters, by contrast, the burden of proof is merely “a preponderance of the evidence.” Just barely tipping the scales in your favor (50.1%).

There are instances in the law (such as in child protective services cases when a person’s parental rights might be terminated) when an intermediate burden of proof called “clear and convincing evidence” is used. It’s somewhere in between (maybe 70-75%).

Thanks for clarifying that !

If the blood test is negative then just what exactly is he guilty of ?

When it’s your time for jury duty…please, please, play nice.

ALL crimes (from the lowest level Class C misdemeanor traffic ticket to the highest level capital murder) must be proven beyond a reasonable doubt (95-99%).

In civil matters, by contrast, the burden of proof is merely “a preponderance of the evidence.” Just barely tipping the scales in your favor (50.1%).

There are instances in the law (such as in child protective services cases when a person’s parental rights might be terminated) when an intermediate burden of proof called “clear and convincing evidence” is used. It’s somewhere in between (maybe 70-75%).

That was great information you provided there and I very much appreciate it. Not for any reason other than to know. What I will say is with the growth of social media it seems we have moved more to the “guilty until proven innocence” mode of thought which I see as a decline in the moral decay of the country.

If y’all go back and read the news reports from May, they’ll tell you the following:

Blood tests are everything and he passed. But based upon that a witness flaged him weaving and speeding and an officer had him going at 80 mph and 35 mph over the speed limit, I would say Ed was lucky for he sure looked a bit unstable with that one foot in front of another. We all know how quick and fast Ed is on the field with his feet and light footed, especially for a big man.
,

Driving recklessly doesn’t necessarily mean DUI. It’s very possible he was doing that without being intoxicated. And, based on the blood test, it seems clear that was the case.

I have no clue as to what happened in this particular incident. But traffic disputes and call ins happen
all the time in Houston and you cannot drive two miles without seeing at least one crazy maneuver.

There was certainly “probable cause” for the Officer to stop him for speeding. If the officer smelled alcohol emitting from his breath as he approached the driver, and spotted an open container inside, then the officer can request that he perform field sobriety tests. If Ed consented to them, and he showed indicators of intoxication on the tests, then the officer may very well have had “probable cause” to arrest him for DWI. The vehicle would have to be inventoried and towed at that point, and if the officers then discovered that he had a gun in the car while intoxicated, there’s a whole new set of issues. Once at the station, they can read a statutory warning on blood tests to him, and if he refuses to give a sample, then he gets his license suspended. At that point, the cops can go to a judge and get a blood warrant signed to make him give blood.

One way or another, they’ll probably get a blood sample from him.

Of course, if the blood tests show that he wasn’t intoxicated, most prosecutors won’t go forward with the case, and that was apparently the case here.

Remember…he’s presumed innocent until proven guilty beyond a reasonable doubt…and if the blood tests don’t prove his guilt (by showing his BAC to be over .08), then the prosecutor must meet that burden of proof by other means, which is VERY hard unless there’s really obvious video evidence of other signs of loss of faculties due to the introduction of alcohol. That’s a tough burden to meet.

Most prosecutors will dismiss in such cases. Too hard to meet the burden of proof at that point.

Driving recklessly doesn’t necessarily mean DUI. It’s very possible he was doing that without being intoxicated. And, based on the blood test, it seems clear that was the case.

No doubt! I didn’t say it was. But he did have a 911 caller complain about his weaving and speeding and an officer flag him at 80 mph and 35 mph over the speed limit and he had an open container. He did not walk that line very well and the cops who do the field test believed there was enough to arrest him. We have all seen Ed’s fantastic foot work even on a bad knee during an ESPN pre-game. He was a bit unsure of his foot in front of a foot test down that line. At least that is what my eyes saw.

I personally think he is lucky it worked out for him. Hopefully there is a lesson in all of that which Ed learns from. Feel free to review the clip of Ed taking 2 of his field tests. Maybe you see the walk the line drill differently from my eyes.