King, Carr and Lark. the future is now

What took so long? Politics.

Allen came to the program highly acclaimed. He was certainly going to start the season and he didn’t do anything in the Spring to disprove his QB-1 status. I believe the staff was obligated to see what he could bring to the program in terms of athleticism and leadership. Postma was the incumbent and earned the nickname Postman, so his QB-2 status was secure. Also Postma was a fan favorite. Factor in the new administration of Major and staff and not wanting to take a chance with King to start the season, QB-3 would have to wait his turn.

There were a few of us who believed that King was the answer, but as fans, we had to painfully wait until the other QBs failed.

Water under the bridge. King is now QB-1 and rightfully so. He is the electric, mobile, play maker that the team needs. He is the next Greg Ward, Jr. perhaps better. What more do we need to see than the outstanding comeback he led to take the lead in the game with time running out?

At this point, I don’t care why it took so long. The important fact of the matter is that King took advantage of his opportunity and I expect the level of exciting Cougar football that we’ve all become accustomed to return and continue this season and beyond.

Remember that King was hurt in the offseason. From those close to the program, there had been talk that the coaches liked King and were leaning towards starting him at the beginning of the season, but he had a setback and couldn’t begin the season (missed the first two games).

They went with Allen because they had a choice of Allen and Postma and they felt Allen gave them the best option to win. When it was obvious that he didn’t fit in this offense, they switched to Postma because he was the only other option at the time (King had just come back for the Tech game and was being phased back in). Postma played well enough in wins against Temple and SMU to keep starting.

Politics had nothing to do with it; if King had been healthy, he more than likely would have been the starter this year.

Yeah, I am sure Applewhite took his sweet time so that a few UH fans could continue to compare him to Levine and call for his head on a platter…lol…kudos to Major for giving King some time to be comfortable. King looked like a deer in the headlights in the first half and then obviously got the hang of things late in the contest. Let’s hope now that King continues to improve and can stay away from injuries…

WOW! Did you come up with this on your own? This should have been released on Oct 26. Does he play in another game before winning the Davey O’Brien?

How do you want me to respond to this…I doubt you’ll believe anything I post, but here goes:

From an August thread when I first heard that King was pushing to be the starter (as did others):

Heard something similar. King is impressing so far.

From what I heard about camp from someone close to the program, King was far and away the best QB and they were close to going with him as the starter until his injury happened. Postma and Allen have basically been neck and neck and they went with Allen hoping for the best. I don't see them benching Allen, but I'd like to see two, or even all three guys, get reps against Temple. CMA has been griping about the offense during the week's leading to the games so I wouldn't be surprised if he g…

Major: Wide receiver D'Eriq King re-injured his knee in camp and would have missed UTSA opener. His status for Arizona uncertain

Choice was between Allen and Postma before Arizona and here’s the depth chart. I don’t have a quote as to why Allen started, but it’s implied that they felt Allen gave them the best chance to win, otherwise they wouldn’t have started him. If it was politics, why wouldn’t they announce Allen as the starter earlier than the day of the game. 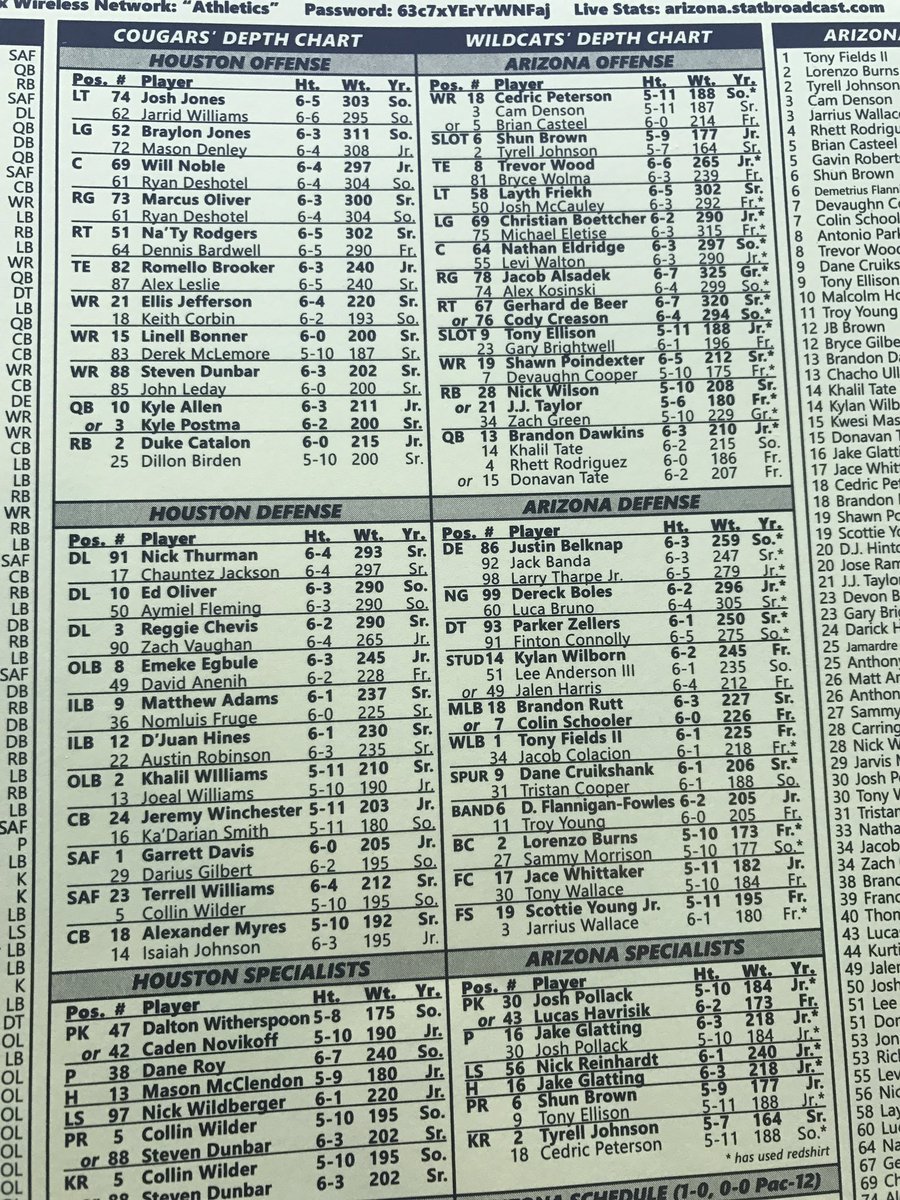 King close to returning for Tech game after missing the first two games: University of Houston wide receiver D'Eriq King is "really, really close" to being cleared to play after missing two games with a knee injury.

“That’s been the toughest decision for me as a head coach the last two weeks because the guy works his butt off and is just trying to get back,” coach Major Applewhite said after Saturday’s 38-3 win over Rice. 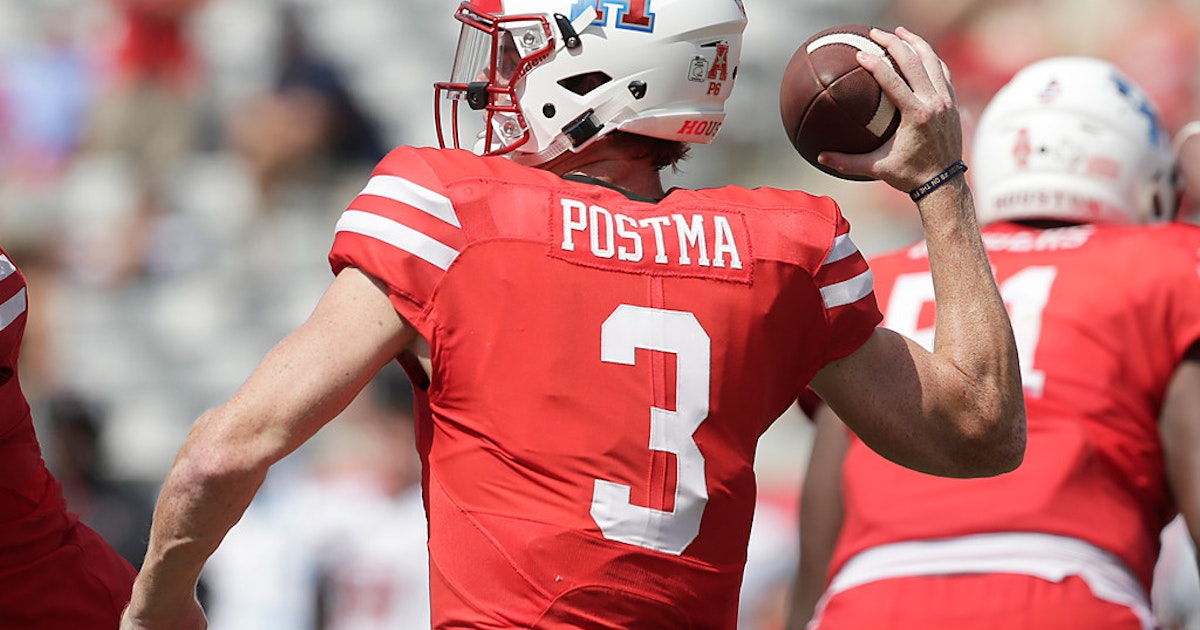 The Houston Chronicle's Joseph Duarte spoke with SportsDay ahead of SMU's matchup with Houston. Here are some highlights.Follow him on Twitter:...

Applewhite plans to continue to evaluate the position, but for now Postma is the guy. Unlike Allen, the fifth-year senior gives the Cougars a running threat, a welcome sight for a team that can’t seem to run the ball.

I will admit that I am guessing as to the reason why Postma started against Memphis since I don’t have evidence other than the short week and the fact that King didn’t come in during the Tulsa game.

As far as getting King in there for this game: TAMPA, Fla. -D'Eriq King has waited patiently for his turn at quarterback.

The plan was to insert King into the game early in the first quarter. Applewhite made the move from starter Kyle Postma after the Cougars struggled with consecutive three-and-outs to begin the game. UH managed only three first downs and 82 yards of offense in the first half, a performance Applewhite called “unacceptable.”

It’s sad to see how many Coogfans go out of their way to say they know more than the coaches but are proven so completely wrong. Yeah, you all would have started an injured King at the start the season, brilliant! morons

It’s sad to see how many Coogfans go out of their way to say they know more than the coaches but are proven so completely wrong. Yeah, you all would have started an injured King at the start the season, brilliant! morons

not taking away from your point but
king wasnt injured at the start of the season. he was injured in camp…he was missing reps

on defense I like David Anenih a lot at OLB , and J Winchester has been solid at CB.

If he wasn’t injured, holding him out of the first two games of the season was the most conservative decision ever.

The UH website says he was injured the first two games of the year.

I seriously doubt it was ever politics. I will choose to believe that CMA has tried to make the right decisions from day one. Why wouldn’t he? Beyond his faith and family, everything he probably holds dear (livelihood, reputation, etc) are at stake. Has he always been right? No, but name a single 1st year head coach who ever has. Hell, name a highly tenured and successful head coach that always has? CMA will ultimately be judged by his body of work and while that has gotten off to a shaky start, it is not over yet. If we go 9-3, we will still quibble over why it took so long to get to King. The fact of the matter is that most of us aren’t privy to what is going on behind the scene. Our opinions are just that and they are fun to discuss. It’s football, the ups and downs can be incredible. Good and bad, enjoy the ride, and pray for some consistency. 1-0 baby!!!

If he wasn’t injured, holding him out of the first two games of the season was the most conservative decision ever.

The UH website says he was injured the first two games of the year.

it was about being conservative… literally watch the post game presser from arizona
king was cleared to play. applewhite was asked why he didnt play…he said he just didnt feel like risking it and we didnt really need him…
more or less why risk re-injuring your backup slot when you didnt need to

Well, I think that if the UH website reflects that he missed the first two games due to injury, then it’s reasonable to believe that.

Whatever the case, it doesn’t really matter - he didn’t play because he wasn’t ready to contribute, not because of some coach’s conspiracy.

Applewhite would have been a fool to not get King on the field as soon as possible, especially since we were lacking speed at the receiver spots. That said, had Allen panned out I think King would have remained at receiver. But as it turned out, all is well and we have a quarterback if we can keep him healthy…

So he didn’t play because of injury

I guess he doesn’t realize how much information you provide to us all time and how much of this you have already stated within your other post.

Thank you again for all the leg work and information you provide for all of us.

Either Guiton has done a great job with Lark, or his not seeing the field is a result of our poor WR coaching.

If Corbin can clean up his game, we could have a scary trio at WR next year when Stevenson gets healthy

Or he could have been out practiced by the other receivers. We rarely run more than three receivers sets, and he’s not going to beat Dunbar and Bonner for a spot. That leaves Corbin. Maybe Corbin just got passed up on the depth chart.

Corbin did not make the trip to Florida. I take from MA’s press conference is that Corbin broke team rules, but nothing bad. Just team rules.

Corbin can’t catch in clutch situations. Miss-timed jump at goal line vs TTU, drop in end zone, other drops. Not nearly enough catches and big plays to atone for all the flubs.

If he can fix that (and it is all mental) he could be good.