Would you mind compiling those rankings that you retweet and highlight where UH commits are on each list.

Can do. Coming in the next few posts

Appreciate it. Your work does not go unnoticed.

Note: I’m using 247 when talking about offers and uncommitted. I don’t profess myself to be a recruiting expert as I’m just looking at the info out there so I apologize if I get something wrong.

As new positions are released, I’ll post them in this thread. Below is what has been released. Remember, this is just state of TX recruits:

Coogs have offered 1-Ty Brock who only has 4 offers so far (Houston, HBU, Louisiana-Monroe, and SMU). Brock broke his leg prior to his junior season causing him to miss the year. 15-Carlos Grace is committed to Houston; Grace is ranked this high even though he missed his entire junior year to injury. Coogs also have a commitment from 49-Elijah Gooden as an athlete. Coogs have offered the following non-commits: 11-Daniel Young & 16-Travell Lumpkin. Young has us in his top 4 along with Nebraska, Minnesota, & Boise State while Lumpkin only has 3 offers from Texas Tech, CSU, and us. We had offers out to a number of these guys, but haven’t landed any of them. Our one WR commit for 2017 (Jeremy Singleton) is out of New Orleans so he won’t be on this list. Players who are still uncommitted that we’ve offered are 4-Omar Manning and 14-KD Dixon. No idea on where either wish to go and Nixon decommitted from Tennessee in June. Coogs have a commitment from 2-Parker Eichnberger as well as New Jersey Tight End, Devin Miller. 17- Alexander Duke has committed to Houston. Houston also has a commit from Unlisted Chidi Ogbannaya (Considered to be an under the radar raw talent). Coogs are hot after 2-K’Lavon Chaisson and are in the running. They’ve also offered 3-Taquon Graham, 16-Ondario Robinson, & 25-David Anenih. Anenih is probably the only one of the three that the Coogs may have a chance on. Coogs have commits from 3-Marquez Bimage and 8-Terrel Bernard. Coogs also have offers out to uncommitted 1-Baron Browning, 2-Levi Jones, & 4-Amaud Willis-Dalton. Of those 3, Willis-Dalton may be in play as he has 12 offers, but hasn’t made any decisions as of yet. Then again, Coogs, already have commits from 4 LBs in this class. Coogs have 3 CB commits, 2 of which made the list: 6-Timarcus Davis & 8-Terry Petry. Commit Javelin Guidry does play CB, but is moving to California for his senior year after playing at Cedar Park HS last year. Coogs are also after uncommitted 11-Kieston Roach, but with 3 cornerbacks already in the class, it would be a surprise if he commits. No commits at Safety as of yet for the Coogs. They have offered the following non-commits: 1-Jeffrey Okudah & 18-Donovan Stiner, Stiner is predicted to Houston and decommitted from Baylor after Briles was fired, however, he is receiving more offers as of late. I know that UH offered Daniel Young out of Westfield. Chaisson would be an awesome get. Stiner as well.

This is fantastic info. Thanks for posting!

Great info…looks like another outstanding recruiting class is shaping up for Houston.

ILB rankings released. Coogs have commits from #4 Mohamed Sanogo and #17 Derek Parish. We also have offers out to #1 Anthony Hines and #2 Riko Jeffers. Hines did cut his list to 10 recently and the Coogs weren’t on it. Jeffers has a number of offers, but is still deciding. Guard listing was released, but we don’t have anyone on it or have offers out to any uncommitted players. 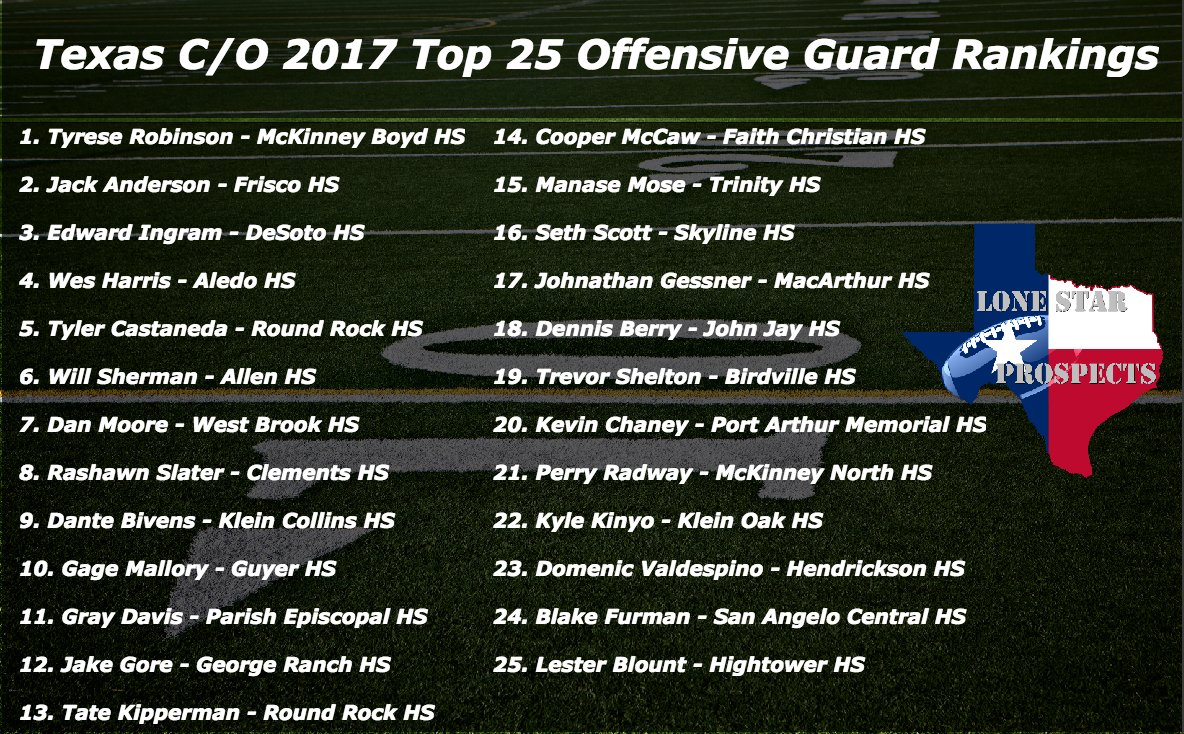 Guard is where we need the most help. Hopefully a couple of guys step up this year and the redshirts will kick some tail next year.

Definitely. Duarte was quoting Herman saying this was definitely a problem area. No guards, no inside running game. It’s definitely cramping Catalon’s style.

Now we need someone to give us a summary of our class to date. Right now the names and even the numbers don’t tell us much. That you Jimmy?

And if we do get that invite to the Big 12 in October this whole thing could change, although I would not expect Herman to back out of any commits.

We have three OL commits. The shortest is 6’ 5". These three Tackles look like they could fill out nad kick some butt.

Picked up the #11 RB, Daniel Young, today based off these rankings.

No Coog commits on this list as we don’t have a DT on our commit list as of right now. We have offered the following non-committeds: #1 Marvin Wilson, #5 Zacchaeus McKinney, and #6 Joshua Rogers Good chance to land either McKinney or Rogers. If my math is right, we have 2 scholarships left for 2017, right? What a boondoggle it would be if we could fill those with Chaisson and Dylan Moses. I seriously doubt Marvin Wilson is coming here as he’s shown almost no interest. But the other two have shown some significant interest recently.

That would put this class at top 20 range.

Moses would be an incredible get as he’s be a lot like Big Ed and hard to keep off the field in 2017.

They released their Center list yesterday. Coogs have no commits at Center nor do they have any offers out there to players that haven’t already committed.