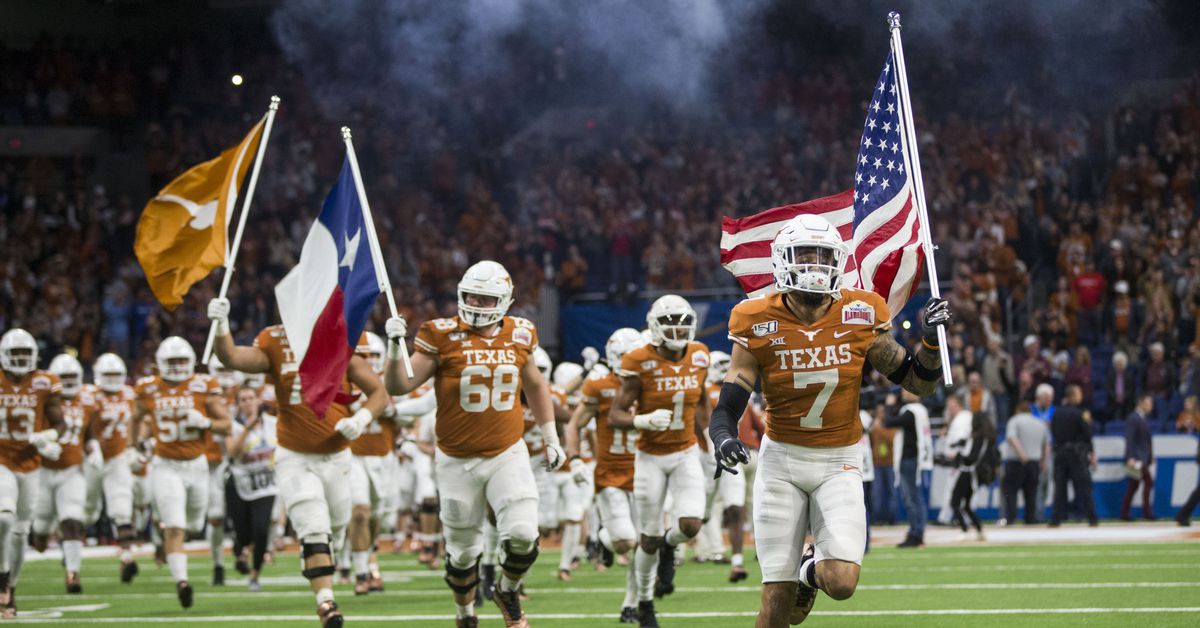 Significant actions on campus include renaming buildings and replacing "The Eyes of Texas."

Lol, Tom was so woke his players now are trying to destroy the program

Maybe someone ought to tell them that “I’ve Been Working on the Railroad” was written more than 40 years after emancipation (and adapted as “The Eyes of Texas” in 1904).

“I’ve Been Working on the Railroad” was written and published in 1894. They stole it and stole Lee’s reference to his students in 1904. They stole the music and stole Robert E Lee’s saying inspire his Southern students. I did not know that this song has been pushed as having racist roots at UT for years. I thought this was something new.

A history of ‘The Eyes of Texas’: Song performed at minstrel shows is now...

“The Eyes of Texas” is nearly as old as the University of Texas itself. The school song was written in 1903 and is played before and after every UT sporting event still to this day.

I’m in favor or prosecuting bad cops and ending qualified immunity. But I don’t see how changing names or razing inanimate objects furthers the objective of racial equality. I doubt any Cop has ever been on the brink of committing an atrocity and thought “They renamed a dormitory” or “They removed a statue of (insert name)” so I probably shouldn’t do this. Just my opinion.

I have an A.P. Wirephoto of my then future wife meeting w/John Connally titled “KEEP OUR STATE SONG” and encaptioned as follows:

“Patricia Malone, 10, and Gov. John Connally look over petition she handed Connally in his office. The petition, signed by 5th and 6th graders at her Brownwood school, urged the governor not to allow the state song to be changed from “Texas Our Texas.” There is a bill before the Legislature to change the song to ‘The Eyes of Texas’.” [This occurred during the 1962-63 school year.]

Year later I worked with John Connally in Houston and he signed the Wirephoto picture as follows:

I’m in favor or prosecuting bad cops and ending qualified immunity. But I don’t see how changing names or razing inanimate objects furthers the objective of racial equality. I doubt any Cop has ever been on the brink of committing an atrocity and thought “They renamed a dormitory” or “They removed a statue of (insert name)” so I probably shouldn’t do this. Just my opinion.

I can see someone driving by a statue and thinking “hey there’s a general who fought to keep me from being considered a full person and my community celebrated / celebrates it with a statue”.

As much as I dislike UT and would like to see their demise, I just don’t understand what about “The Eyes of Texas” is considered racist or uninclusive.

Are you going to tear down the Washington monument and Jefferson memorial in Washington DC? Both were slave owners. Probably not.

The reason I bring those two people up is because their views on slavery aren’t the totality of their impact on our present day.

If someone is so hellbent on destroying any references to slavery, they should be picketing outside the Roman Coliseum. A third of their population were slaves.

The point I’m making is that you have to be consistent with your outrage before I will take you seriously.

Maybe it’s a matter of degree. The confederate heroes have slavery as a much much larger percentage of their impact on society.

I’ve never been to Rome so I can’t say how much the impact of slavery and subsequent racial inequality carries forward to this day, but you may have a point

IIRC, back in the 70’s the UT student body voted to change their mascot name from Longhorns to Armadillos…yeah, it went nowhere.

I already posted this on the Satellite, but I’ll post it again here.

I can understand how that song would be offensive, if it did in fact have its origin in minstrel shows.

On the other hand…you could apply the same logic to songs like “The Camptown Races” and “Oh Susanna.” Those are both minstrel songs.

Also, have you heard the old joke “Why did the chicken cross the road? Because it wanted to get to the other side!” That’s a minstrel show joke.

Should it be declared anathema?

Hey listen, I hate the Whorns, and love seeing them be publicly shamed.

But this reasoning could possibly be taken to an extreme.

Ah, it was 40 years after slavery, that makes the original lyrics totally okay, then. I've Been Working on the Railroad

"I've Been Working on the Railroad" is an American folk song. The first published version appeared as "Levee Song" in Carmina Princetonia, a book of Princeton University songs published in 1894. The earliest known recording is by the Sandhills Sixteen, released by Victor Records in 1927. The melody of the opening line of "I've Been Working on the Railroad" may have been inspired by the very similar melody at the beginning of the cello solo about one minute into Franz von Suppé's 1846 Poet and Pe...

I am an African American male. The Confederate states fought and killed to maintain the inhumane institution of slavery. Numerous residual elements of their culture remains offensive to black people or people in general who truly value human rights. I became a Cougar because of Coaches Yeoman’s and Lewis’ multicultural bravery.

Should we remove the Cullen name?

The original Cullen foundation charter was pretty racist as well, or so I’ve heard.

Hugh Roy Cullen was a Dixiecrat, and called FDR’s policies “The Jew Deal.”

Ezekiel Cullen was a part of the government of the The Republic of Texas, another nation built on slavery.

Look for that name to go away.

Well, if I’m being honest, I’m offended that ut has recieved billions of dollars in PUF funds. Super offended. So, since their president is interested in feelings and maintaining fairness and balance, I think that’s worth taking a look at.

The Roman Colosseum committed no crime.

In fact - racism isn’t a crime.

However, sex slavery, child rape, kidnapping, torture, murder and human trafficking are the WORST of crimes.

Anyone associated with any of those crimes should have their statues removed IMHO. Those dishonorable deeds trump any accomplishment you could ever make or any impact you have in the world. You don’t deserve to be honored and you shouldn’t get a “pass” bc you wrote the constitution. Not in this world.

What kind Of message are we sending to our kids by continuing to honor people like that?

To me it’s a sliding scale, the good you’ve done vs. the bad/unseemly or racist beliefs one held. And it’s one of those debates for some people we talk about will be uncomfortable if we talk about it honestly.
But anyone associated with the Confederacy shouldn’t be a real difficult decision, at all. Unless someone was like a Schindler or something using their power in the Confederacy to help slaves escape and/or kill Confederate leaders to facilitate the end of the war.