Look what blew Into our locker room today 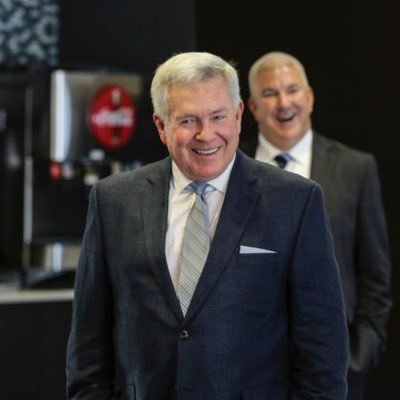 Great time tonight speaking to @CoachApplewhite and his @UHCougarFB team. They are looking good Year! https://t.co/coUpXPLRnN

ya…i don’t know how I feel about that…

It’s all good boys. Don’t let your hate get in the way of a hall of fame coach and national espn announcer speaking with our team and one of his protégés.

He has paid plenty of compliments to our program since beginning his broadcast career. He always has nice things to say.

I’m completely fine with it!

Me too… He’s a football guy and holds no allegiance to his former employer. It’s football.

Really good announcer he is knowledgeable about our team. That being said spray that film room down for Longhorn cooties. Ew.

Never cared for the guy !!

A better title for this thread would be “look who just slithered into our locker room” !!

If it gets us some attention, I guess I’ll take it. With all the big Ed press we are getting a little more from an espn announcer can’t hurt.

I guess herman was busy doing whatever herman does.

Guess the team got lucky.

Mack had already been out to practice earlier in the day/week in austin.

You guys are looking at it the wrong way. As much as I hate the Horns, this must agitate them to the “nth” degree! Mack gives a pep talk to lowly Cougar High? The outrage! Love it!

This is awesome news.

Agree completely. He was the last decent coach they’ve had and they still won’t admit it!

He was a huge influence on Herman going to Austin…in fact, many credit him as the reason that Herman stayed the 2nd year instead of going to South Carolina as he was the one that convinced Tommy that Austin would be hiring after the following year. Stating that he has no ties to Austin is just untrue…he also led the fact-finding mission to see if UT-RGV could start a football program and has been seen in Austin many times in the offseason.

Don’t get me wrong, he’s a knowledgeable guy and, from a completely on-the field aspect, is someone the players can learn from. Just watch your backs when you’re around him as he’s just another Horn.

Herman was going somewhere … on that, I think we all can agree. I would be shocked if he’d not talked with Brown beforehand. Numerous times in multiple settings I’ve heard/seen Mack Brown pass out unsolicited praise for the Houston program to a national audience. My wife has commented on it several times. For that reason alone, to me Mack Brown isn’t just another Horn.

He has an office at that s hole in austin. Have to keep your eye on a snake.

I don’t have a problem with these coaches bouncing around for more money. What I do have a problem with is coaches leaving before the season is over and justifying it with the excuse of recruiting. Why does it have to be a prerequisite for the leaving coach of a g5 program to lay waste to the program before they leave? Fisher finished his season didn’t he? Why won’t the media address this? If I ever get face to face with Applewhite or any other coach it’ll be the first thing I’ll say. I know the difference between right and wrong.

As long as he’s not evaluating QBs for CMA, it should be ok.