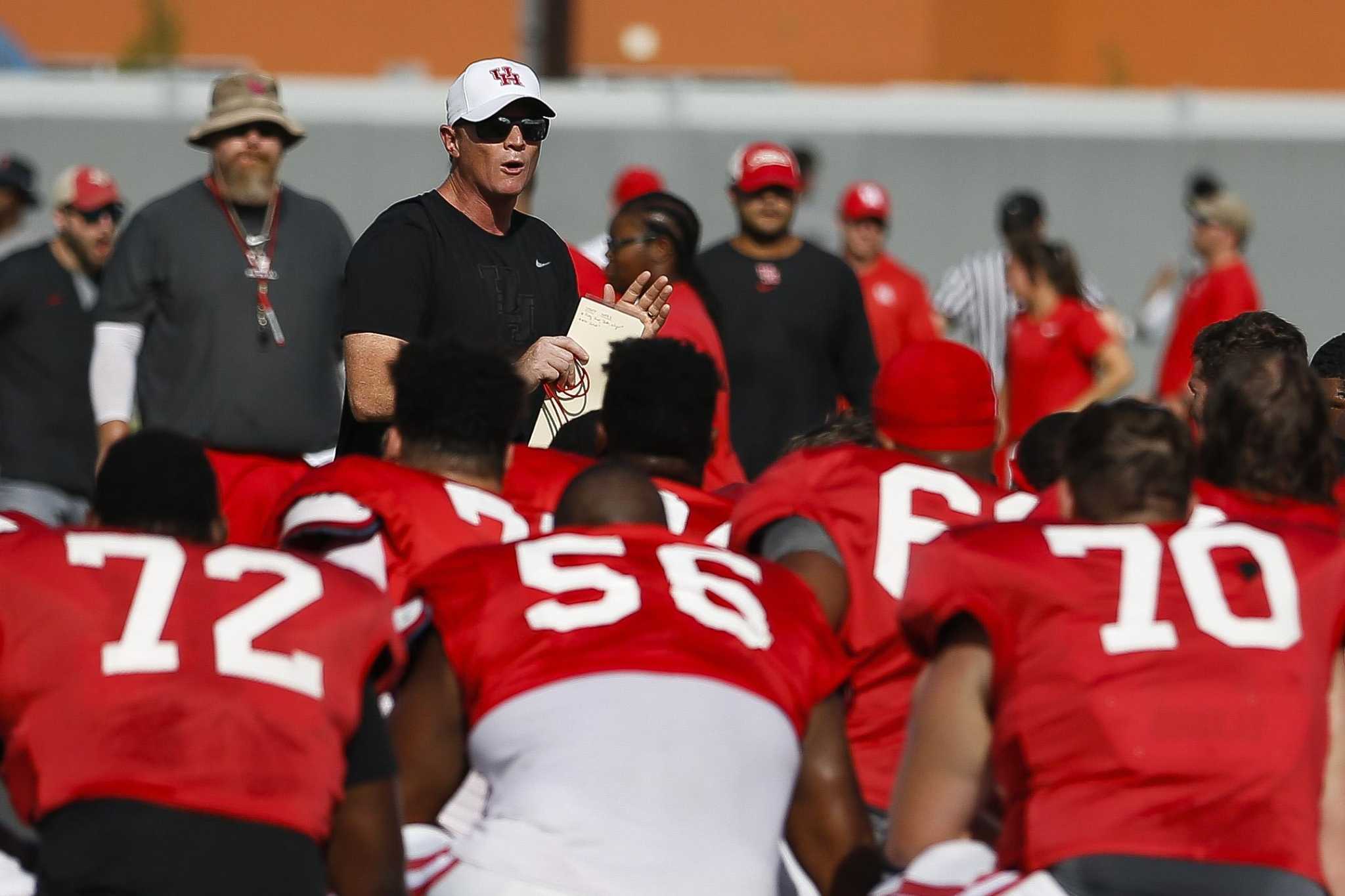 The bottom line for the Cougars: If you’ve earned the trust of your coaches and teammates, you’ll play against Rice.

“One thing we talk about with all of our players is we don’t really look at (the depth chart) in terms of starters,” Applewhite said at his weekly news conference. “There are guys that play, and there are guys who don’t play. How much you play is based on the trust your staff and your players have in you, combined with your production level. It’s very simple: You want to play more, create more trust and have more production.”

I guess there goes the excuse of his QB of choice being hurt last year as to why no depth chart. I almost feel like it’s an ugly way to keep guys that aren’t progressing or have moved backwards in the depth chart around until the season starts.

“It’s really no big deal, said coach Major Applewhite, who is following the same script used a year ago for his debut season. The policy goes back to former coach Tom Herman’s arrival in 2015.”

Because when it comes to personnel and player relationships, Herman has the answer. (sarcasm)

I believe players deserve to see where they are in black and white. Not standing on the sideline at game time with your helmet in hand and watching coach call in the new guy ahead of you to find out you still aren’t in the “circle of trust.”

I truly doubt the players don’t know where they stand with their own coaches. I would be shocked if there was a single player for game 1 who thinks he’s starting but doesn’t. Just because it isn’t written down doesn’t mean it doesn’t exist. I think this is more about not letting other teams know who to prepare for, but even that only works for game 1. The fans are upset because they’ll have to spend more time looking at their program to figure out who’s on the field.

Really people? Do you really think that it’s that important before the first game to know who’s 2nd and 3rd string? I don’t. Maybe if we were opening against Alabama, but it’s Rice. I’m sure the coaches are hoping to play as many guys as possible for a couple of reasons. Heat (actually 3 reasons), heat, and then there’s the heat. Also, though everybody’s taking Rice seriously, by the 2nd quarter or sooner, this shouldn’t be much more than a glorified practice. It’s going to be a great opportunity to evaluate non-starters including new comers.

There are probably a couple of spots still being decided and they want to keep the competition going up until game day. Additionally, CMA seems to keep things like this and injuries close to the vest when there isn’t a reason to show your cards.

I think this is more about not letting other teams know who to prepare for, but even that only works for game 1.

This year game 1 is against Rice. Last year game 1 was suppose to be UTSA. I really hope Applewhite doesn’t feel too worried about other teams like those being too prepared playing us.

Over the years I’ve seen too many games the Coogs should beat soundly be nail biters and losses. The failure to take seriously every team is a crucial mistake. Every team knows that a win against UH makes their year. Plus Rice already has those first game mistakes covered. UH should win big time. Just like my expectations that my last years Tulane trip was going to be a big win.

This year game 1 is against Rice. Last year game 1 was suppose to be UTSA. I really hope Applewhite doesn’t feel too worried about other teams like those being too prepared playing us.

I think it goes further than that. And I emphasize “think” because I haven’t talked to CMA and therefore don’t “know” anything. But I “think” it goes as far as not giving Arizona more of a heads up than necessary about who the starters will be for week 2. If CMA can mix and match to a large extent for the Rice game, maybe it makes it a little more difficult for Arizona to prepare. Or, maybe this really is about some positions not being solid yet. Guess we’ll find out.

Speaking of no depth chart, Mike Leach is a national treasure.

No depth chart is not that big a deal. The coaches and the players know where everybody in their groups stand. I think the first thing to note is Pheniix not being listed as a top 3 back. So either the move was a little over-hyped or the placard is out of date.

Biggest thing to me was Banes being the backup at RG. One of only 2 true freshmen on the depth chart (Trahan at TE)