On Deck: at Memphis for a three-game @American_BSB series, beginning Thursday at 6:30 pm #M64 https://t.co/Hqs4JDA0As 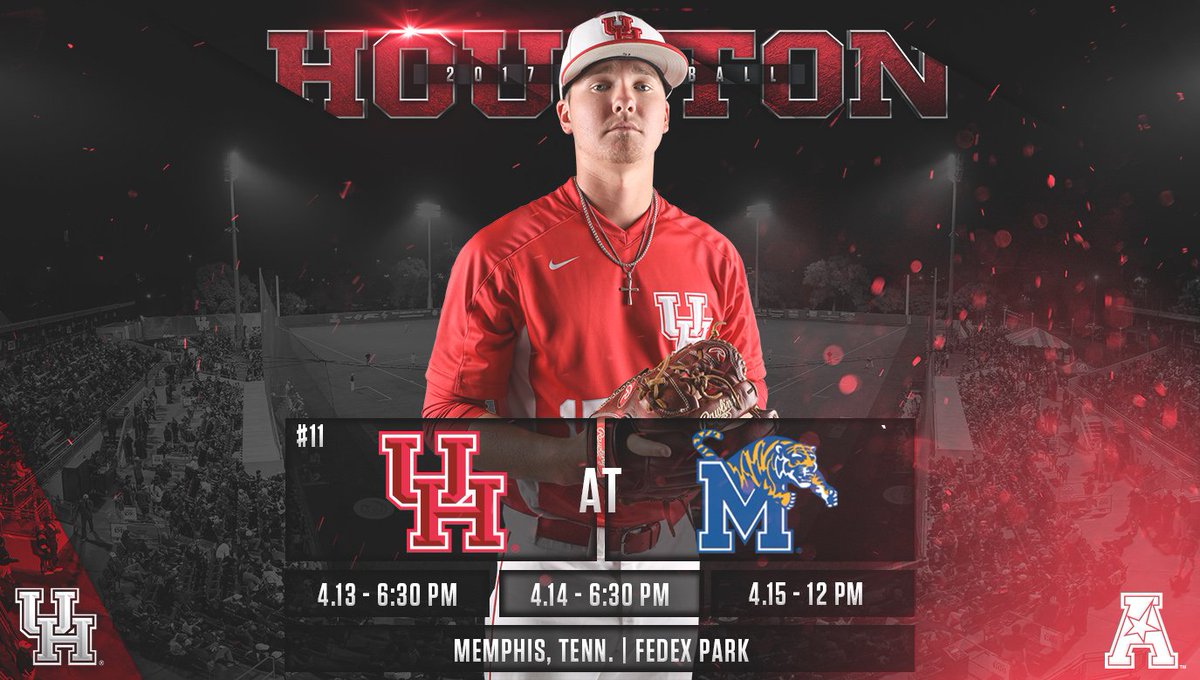 Preview: Houston at Memphis this Week

Houston Baseball will hit the road once again for a three-game set at American Athletic Conference foe Memphis this week as the Cougars and Tigers face off in a pivotal series, beginning Thursday at 6:30 p.m.

Memphis enters the weekend series with an overall record of 20-13 and a 2-4 mark in American play.
The Tigers are coming off an 11-4 midweek loss to Arkansas State at home on Tuesday.
Memphis was swept by UConn last weekend on the road in its second league series of the year.
As a team, the Tigers are hitting .259 and slugging .391 with 64 doubles, five triples and 24 home runs. Memphis is led offensively by Tyler Webb’s .311 average, while Andy Bowman paces the team with 26 RBI.
The pitching staff for Memphis owns a 4.18 ERA with 12 saves and 255 strikeouts and 125 walks in 299.1 innings.
RHP Alex Hicks will go Thursday, owning a 4-2 record and a 4.30 ERA in eight appearances and six starts. LHP Drew Crosby will get the nod Friday, owning a team-best 4-0 record and 3.02 ERA in eight starts and nine appearances. RHP Connor Alexander will start Saturday for Memphis, owning a 5-2 record and a 3.21 ERA in eight starts.

This is a big series. In the past we have not done well in our series in Memphis. If we can go there and take 2 of 3 (I would be very happy.) it will position us well in the standings going into the following weeks.

We need Tulane to bring UConn back to the pack.

Traveling tonight so won’t be on for the game.

Agree with you @sarkcoog in that this series scares me a bit. Memphis is very tough at home.

The pattern of going 3 up-3 down, and then getting mashed on in the 1st is getting old.

Coogs have rallied back to take the lead, 4-3 in the 4th. Scheiner and Wong have homered.

Hearing it off the bat, it was a no doubter.

The results are falling our way so far this evening.

That was a remarkable performance by Cumbie. After giving up six hits and three runs in the first, he shut them down for the next seven innings. Home runs by Scheiner and Davis closed the gap, then the big fourth inning highlighted by the slam by Davis helped turn it into a laugher.

Poor ECU. They started the year at #6.

I thought we had bad luck last year, yikes

Nice win tonight. Caught Davis’s grand slam while traveling tonight and pumped my fist quite a bit. Hope the bats remain hot the next 2 games.