Micaela Bouter was the AAC Diver of the Week

She was the #1 or #2 diver in the conference last year and is picking up right where she left off:

Micaela Bouter of @UHCougarSwim is the Female Diver of the Week https://t.co/Gg2xyQtAgw 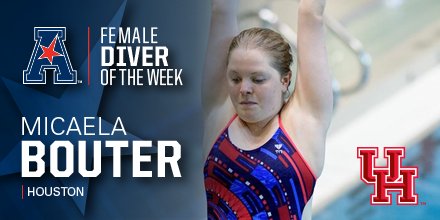 Bouter captured the 1-meter and 3-meter, and finished runner-up on the platform as diving events returned to the Phill Hansel Invitational. The Johannesburg, South Africa finished with a score of 321.80 in the 1-meter, defeating the field by 38.65. In the 3-meter she finished atop the podium with a score of 332.10 to help the Cougars win first ever team title at the Phill Hansel Invitational.