What an iconic figure and huge influence on so many great musicians who have given us so much. Regardless of your taste in music, how could anyone not like his music? So much freakin fun! And way ahead of his time. No greater compliment than to have great musicians admit what a tremendous influence he was on their careers. Does not get any better compliment than that. 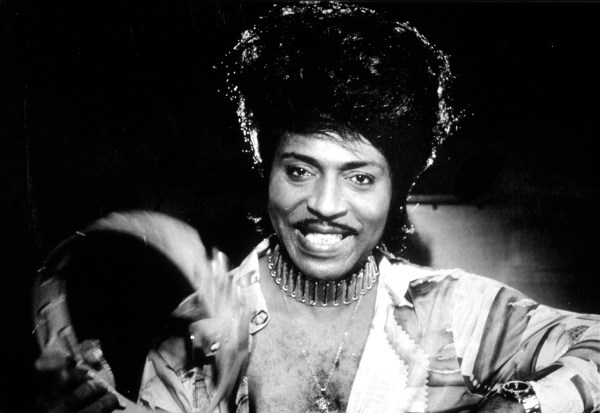 Pianist-singer behind “Tutti Frutti,” “Good Golly Miss Molly,” and “Long Tall Sally” set the template that a generation of musicians would follow

Who can ever forget those inspiring lyrics like “Tutti fruiti, oh rutti” and the great “A wop bop a loo bop a wop bam boom”?

You know they had to clean up those lyrics?

A wop bop a loo bop a wop bam boom

In April 2012, Rolling Stone magazine declared that the song "still contains what has to be considered the most inspired rock lyric ever recorded: ‘A wop bop alu bop, a wop bam boom!’ "[

You know they had to clean up those lyrics?

If they hadn’t changed those lyrics that song goes nowhere in 1955 and possibly destroys his career. Changing the lyrics to what Rolling Stone described as still the most inspired rock lyric ever recorded was the smartest move of his life most likely.

Yes singing “good booty” would have been too much

That was only one of the lyrics. The lightest one. I’ll find them for you. They may get deleted. But it was about a gay man (“Tutti Frutti” was a reference to a gay man) having sex and it was changed. Far more extreme then “good booty” and especially considering it was 1955.

Here, you can find the original lyrics as I stated and their history with the re-write. There were far more to it then “good booty”. "Tutti Frutti" (Italian: "All fruits") is a song written by Little Richard and Dorothy LaBostrie that was first recorded in 1955, becoming Little Richard's first major hit record. With its opening cry of "A-wop-bop-a-loo-bop-a-wop-bam-boom!" (a verbal rendition of a drum pattern that Little Richard had imagined) and its hard-driving sound and wild lyrics, it became not only a model for many future Little Richard songs, but also a model for rock and roll itself. The song introduced several o In 20...

Either way, it was changed by the writer and turned into a great song and very popular that all could enjoy and for which future great artist from Elvis to the Beattles re-produced.

Please post the lyrics, by todays standards nothing in them should be censored. Good Booty and Juicy is as raw as it got but any illusion to gay sex was too taboo till… Maybe the 2000s

I posted the story of the lyrics. These aren’t my words, just what I read about them. His drummer confirmed them.

His drummer is still alive.

Charles Connor (born January 14, 1935) is an American drummer, best known as a member of Little Richard's band. Richard's shout of "a-wop bop-a loo-mop, a-lop bam-boom" at the beginning of "Tutti Frutti" is said to be a reference to Connor's drum rhythms. James Brown described Little Richard and his band, with Connor as the drummer, as "the first to put funk into the rhythm." Connor was born in New Orleans, Louisiana. His father, a merchant mariner, was from Santo-Domingo in the Dominican Repub...

If its tight its alright

You did read the story correct? His producer, Robert Blackwell had the lyrics changed due to its sexual humor with having song writer Dorthy LaBostrie changing the words.

There were pretty explicit lyrics and it was 1955.

After this lively performance, Blackwell knew the song was going to be a hit, but recognized that the lyrics, with their “minstrel modes and sexual humor”, needed to be revised for lyrical purity.[11]

Blackwell contacted local songwriter Dorothy LaBostrie to revise the lyrics, with Little Richard still playing in his characteristic style. According to Blackwell, LaBostrie “didn’t understand melody” but she was definitely a “prolific writer”.[12]

The original lyrics, in which “Tutti Frutti” referred to a homosexual man, were:

These were replaced with:

“Aw rooty” was a slang expression meaning “All right”. According to Charles Connor, Little Richard’s drummer, the original lyrics were:

You can grease it
Somebody censor this lewdness

Never saw Little Richard, but saw Johnny Winter a few times and he got after Long Tall Sally.

You can grease it
Somebody censor this lewdness

It’s a bit more impactful with the three lines combined. But they did change (censor) with that decision being made by the producer Blackwell and a new writer LaBostrie way back in 1955. Pretty smart move don’t you say? Career changing on the charts, and R&R history, influence upon great musicians, song writers, and singers, and certainly with those longtime royalty checks.

In 1956 I was 9 years old and would not have had a clue about the original lyrics. Lids weren’t as “worldly” back then. Tutti Fruiti was an ice cream flavor.

And a slang term for a gay man according to the document which is validated by the original words to the song and the reason the producer had the words wisely changed into a incredibly impacted song that almost all enjoyed. The original words, wouldn’t have had the same impact.