Glad to see this, stir up some interest early.

And fans can join us inside TDECU Stadium on April 16 and 23 for open practice! Both practices begin at 6 p.m. Please remember that masks and social distancing is required. 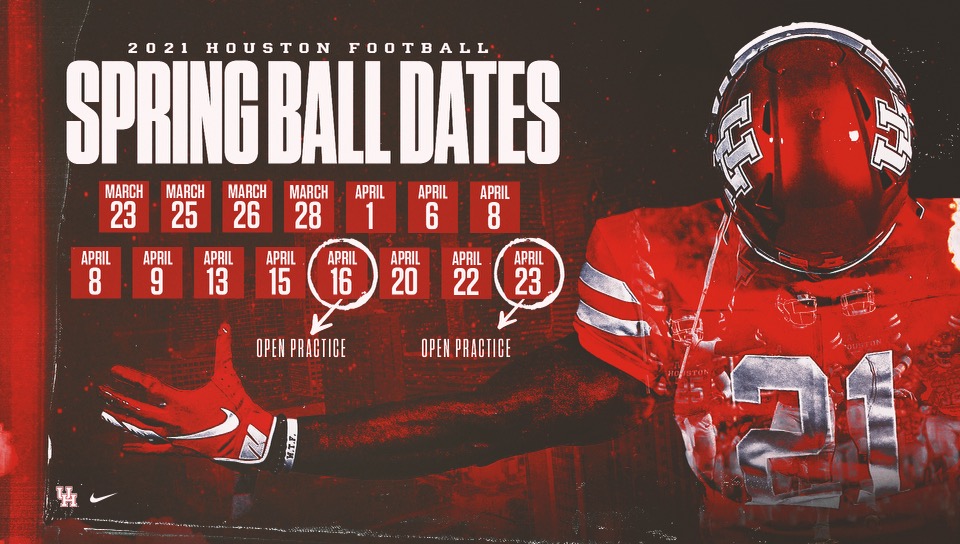 Thanks for posting. Hopefully, Dana will do a couple of pressers during spring practice just to stir up some media interest and get folks talking about Coog FB.

I’ll be there for at least one of them with my kiddos!

He had one today.

Mike, Thanks for posting. Very informative and the most transparent and positive we’ve seen CDH in a while. I look forward to attending one of the Friday open practices in April.

Sooo, Tune will start and receiving core needs to develop. Hopefully that O-line will be much improved. Geezzzz

Did he state tune was starting in the video?

And,yes, Dana said that Tune is the starter.

The backup QB to be determined from Spring and Summer practice.

We will have 6 RB’s and that includes Mulbah.

CDH mentioned that he’s going after add’l WRs in the portal this spring. It was reassuring to hear the coach stress the importance of continuity on both sides of the ball. Running the same offense and defense for the third straight year should produce some positive results.

I assume we are bigger, stronger AND faster?

Running the same offense and defense for the third straight year should produce some positive results.

Our offense is predictable and inefficient and the defense has a new coordinator, albeit one that was promoted from within the program. An overhaul is unnecessary, but the same offense and defense would be ill-advised.

Running the same offense and defense but with the personnel to run it will help.

Maybe we haven’t had the roster strength to execute Dana’s offense the way he thinks it should be. Perhaps that’s a failure on his part to not adapt the offense to the roster he inherited, but I’m optimistic that O production will improve this fall. Coach mentioned during the conference that continuity, along with more depth will allow him to introduce more wrinkles into the offense.

The same thing on defense, Holgo mentioned that Doug Belk would run the same defense with perhaps some added features. Holgo also mentioned the need for the secondary to come up with more turnovers this season. Acknowledging that the previous two seasons that D had underperformed in this area. Not to sound pollyannaish, but I’m hoping with this year’s soft schedule and an improved O-line, we can improve in the W-L column.

I don’t think there is any doubt that we improve the W-L column. Our schedule is as cuppie and as cakey as a cupcake can be. The measure will be how we play against teams that have half a pulse. Personnel has not changed much, just have a year more experience. I am interested in seeing if we make a step forward on playcalling and execution.

It has been, shall we say, a little below average lately.

No team has an effective Offense when it cannot block the opponents.

Is there going to be a Red & White game? Go Coogs!

It doesn’t appear so. From what I am seeing, a lot of schools are opting out of an official spring game because of covid…or at least that is what is being stated.

“You better be able to develop them or they’re going to have to move on.” Those are some tough words, but it’s true in ‘real life,’ so CDH better start getting his players used to that kind of mind set while still in college, right?