Lou Spanos, who has coached in both college and the NFL, has been named the new defensive coordinator at UConn.

Spanos, 47, was an analyst last season for Alabama after serving as the linebackers coach for the Tennessee Titans from 2014-18. He was defensive coordinator at UCLA during the 2012 and 2013 seasons. He also spent 15 seasons on the staff of the Pittsburgh Steelers.

Just by names on the resume it seems like they may have gotten a good one. Why UConn should probably drop to FCS

The Huskies’ situation in the AAC is as bad financially as it is on the field. Dropping a level could help fix both.

Hey, it’s the semi-annual “UCONN should drop football and go to the Big East” article. Right on schedule too.

To be honest, if they are truly running a $40M+ deficit, they should probably consider it. UCONN had a Fiesta Bowl berth, but they were 8-4 and the Big East was down that year. They probably have no chance of ever getting back there and their ceiling is probably 8-4 and a middling bowl.

Jeff Jacobs: Edsall chipping in for Dunn is unusual, but understandable

Among the various scoops, financial reports and responses to NCAA allegations this past week, only one matter had this longtime observer of UConn athletics go "Whoa!" and spit up in his Cocoa Krispies. It was this, in Hartford...

Edsall bolted UConn in the middle of the Arizona night in January 2011. Yes, he has issued his mea culpa. Yes, he said it was a decision he regrets. Nevertheless, his desertion in the desert planted the seed that flowered into the UConn football disaster that, in turn, plays a significant role in the difficult financial straits of the school’s athletic program.

At this point, Edsall should be the last person to pick his successor. His eyes should be on the 2019 schedule, where there certainly are games to be won in the third year of his long-term vision of program building.

When Rentschler Field opened in 2003, public officials vowed a thorough slate of events, a wave of economic development and a transformation of UConn's athletic department. More than 15 years later, those promises remain largely empty.

But some fans have begun to wonder whether football is actually holding UConn back. If the school were less concerned with football, their argument goes, it could join its old basketball rivals in the reconstituted Big East and either latch onto an FCS conference for football or abandon the sport altogether.

Asked recently about the possibility of dropping football for the sake of savings, athletic director David Benedict said that he doesn’t “particularly think that is the answer,” and new UConn President Thomas C. Katsouleas offered a similar appraisal. Given those stances, and the fact that only one school (the University of Idaho) has ever abandoned FBS for good, UConn will likely remain in college football’s top division for the foreseeable future, leaving open the chance that Connecticut is eventually rewarded for its leaders’ faith in the program.

Meet Art Thompkins, the running back transfer who could hold the key to UConn’s...

One of the most eye-catching players in the UConn practices this spring has been Art Thompkins, a speedy transfer from Toledo who figures to team with Kevin Mensah next fall in what could be a dangerous two-man attack.

Thanks largely to injuries that obliterated the Huskies’ backfield depth, UConn relied overwhelmingly on sophomore Kevin Mensah, who finished third in the American Athletic Conference with 225 rushing attempts.

Now, however, Mensah is getting some help. One of the most eye-catching players in the UConn practices open to the media so far this spring has been Art Thompkins, a speedy transfer from Toledo who figures to team with Mensah in the fall in what could be a dangerous two-man attack. 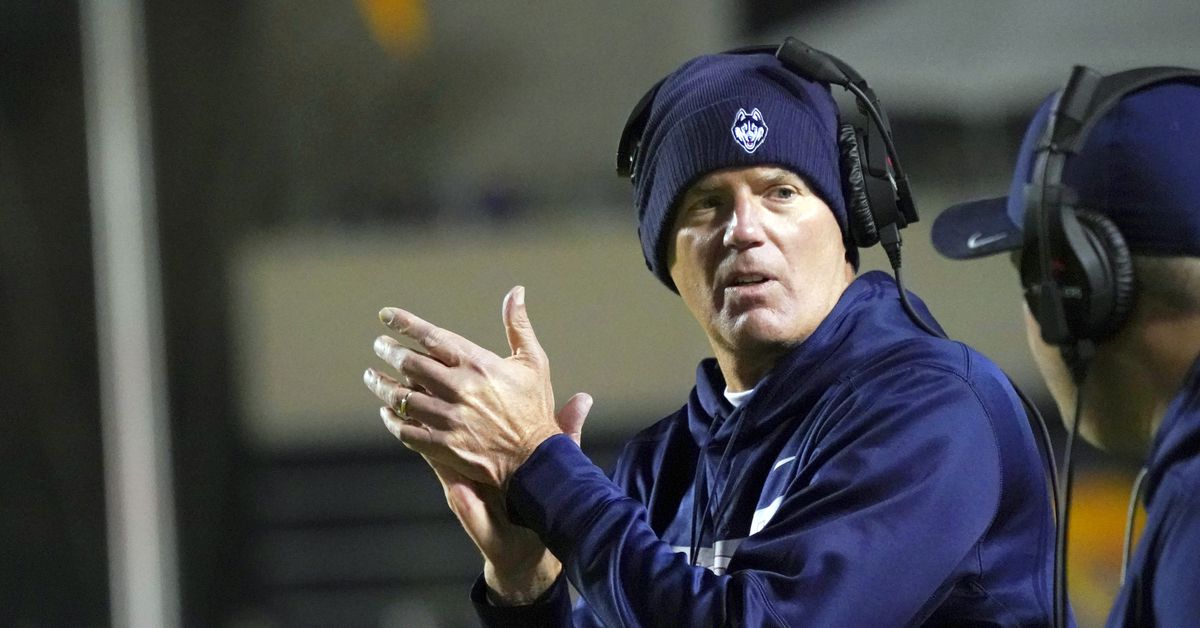 UConn almost literally can’t get worse. So there’s that.

Randy Edsall’s Huskies hit rock bottom with maybe the worst defense of the 21st century. How much improvement is actually possible?

1. While UConn’s entire athletic department seems to be battling an existential crisis anyway, it fielded last fall’s most depressing football team in FBS.
2. The defense allowed more than 600 points. SIX HUNDRED! The offense was the Huskies’ best in nearly a decade, and they still went 1-11.
3. New defensive coordinator Lou Spanos is crazy for taking this job, but he’ll at least have a more experienced two-deep. It can’t possibly get less experienced, anyway.
4. The offense has a few intriguing RBs, but a new starting QB and mostly new receiving corps will need to show enough competence to avoid loaded boxes.
5. The schedule features six opponents projected 75th or better. Considering UConn could improve significantly and still rank in the 100s, that puts a cap on the likely win total.

Today in offseason research: UConn allowed 8.9 yards per play on first down last year (per Athlon). UConn had the worst defense in FBS history and faced the second-fewest third-downs in the country (behind Army). That's why.
H-Town (Cary) June 22, 2019, 3:27pm #10 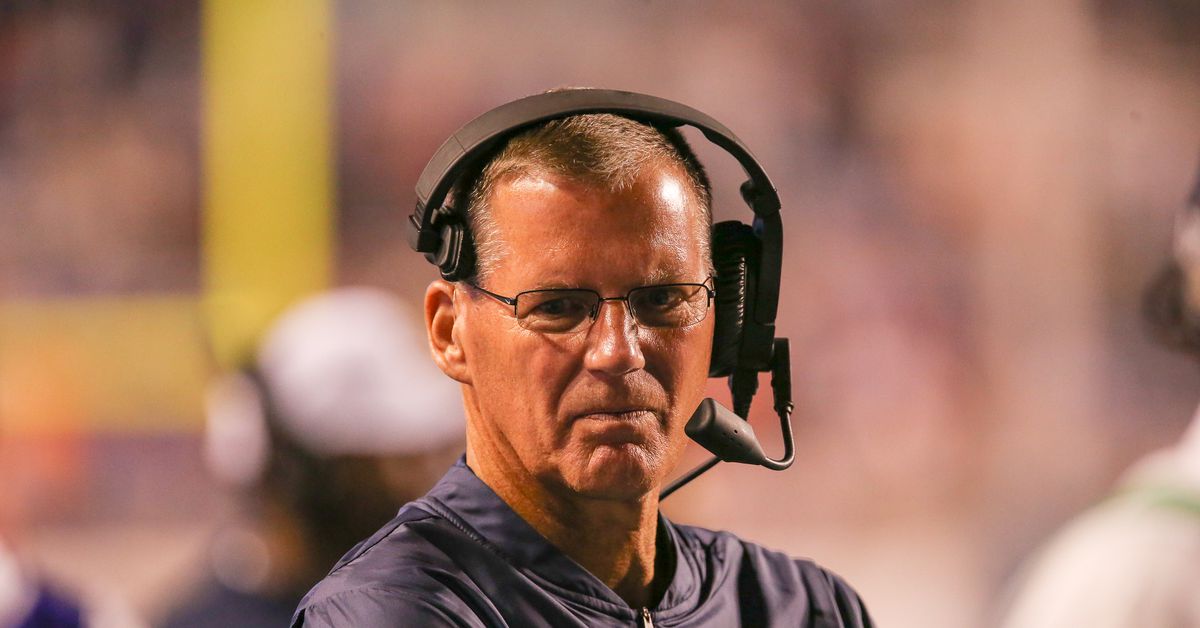 We kick off our weekly previews of every team in the AAC with Aman Kidwai from the UConn Blog of SB Nation.

We get to break the tie this year since the series is 1-1.

Between two new captains, two academically ineligible players, one transfer, one addition and one early retirement, Tuesday was a newsy day in the UConn football realm.

Cornerback Ryan Carroll and running back Khyon Gillespie are academically ineligible and will not play in 2019, Edsall said. Carroll started eight games as a true freshman last year, while Gillespie appeared only briefly before tearing his ACL and missing the rest of the season. … Russell Dixon, a wide receiver from Nepean, Ontario, announced Tuesday that he would join UConn’s 2019 freshman class. Edsall had previously mentioned plans to bring in one more player … Freshman defensive end Jeff Woods, who arrived on campus early and participated in spring practice, told Edsall on Tuesday that he plans to transfer.

No AAC interior defender had a better run-stop rate than Travis Jones. https://t.co/8FfpuIXoYb

UConn’s offensive line seemed to get stronger as last season progressed, as players adjusted to new rules and benefited from added experience. Now, with four starters, returning, it stands to be one of the Huskies’ strongest position groups.

As long as UConn’s offensive line remains healthy in 2019, there’s no reason it can’t be even more effective than it was last year, opening holes for the team’s running backs and buying time for its quarterbacks. If anyone goes down, the Huskies’ depth will be tested and one or more young lineman will have to emerge, but overall, this figures to be one of UConn’s more dependable groups.

“Rentschler has been bleeding money. An examination by Hearst Connecticut Media of 14 years of annual audits revealed more than $13 million in deficits between revenue and expenditures.”

A good read.
What is UGone thinking w this move? They have just so much $$$ into football facilities & no way to make the money drain go away.

Your Money, Your State: The $92 million Field of Nightmares

Hearst Connecticut Media's series, ' Your Money, Your State,' looks at how state government spends taxpayer money, from stories that reveal wasteful spending to stories that explain why and how spending decisions are made. It's your money, and...

Per Randy Edsall, #UConnFootball won't be releasing a 2-deep. They are going to have a participation list, listed in alphabetical order

It's going to be a participation squad, rather than 2-deep because "We are going to play a lot of guys this year."

Edsall expects to play at least 8 guys on the defensive line this season. All this from the Middlesex Chamber of Commerce breakfast this AM
1 Like
montcoog (Kendall Barrett) August 24, 2019, 2:23pm #20

Do they all get Participation Trophies ???
The Joke continues.

UConn loses to UCF, 56-21. UConn coach Randy Edsall picks up $2,000 bonus b/c Huskies' defense had better red-zone scoring percentage against than UCF's. (UConn allowed 4 scores in 5 trips by UCF. UCF allowed 3 scores in 3 trips.) Edsall has at least $38K in bonuses this season

" Bonus of the Week

Speaking of UConn, as you can see above, the Huskies lost their latest rivalry game against UCF, 56-21. More importantly, the loss gave us all another reminder that Randy Edsall has the greatest agent in the world.

Randy Edsall is 5-23 in his second stint with the Huskies. Oh, and do you remember who one of the leading candidates was to join the Big Ten during conference realignment hysteria? That’s right, it was UConn. The Big Ten was really thinking things through back then." 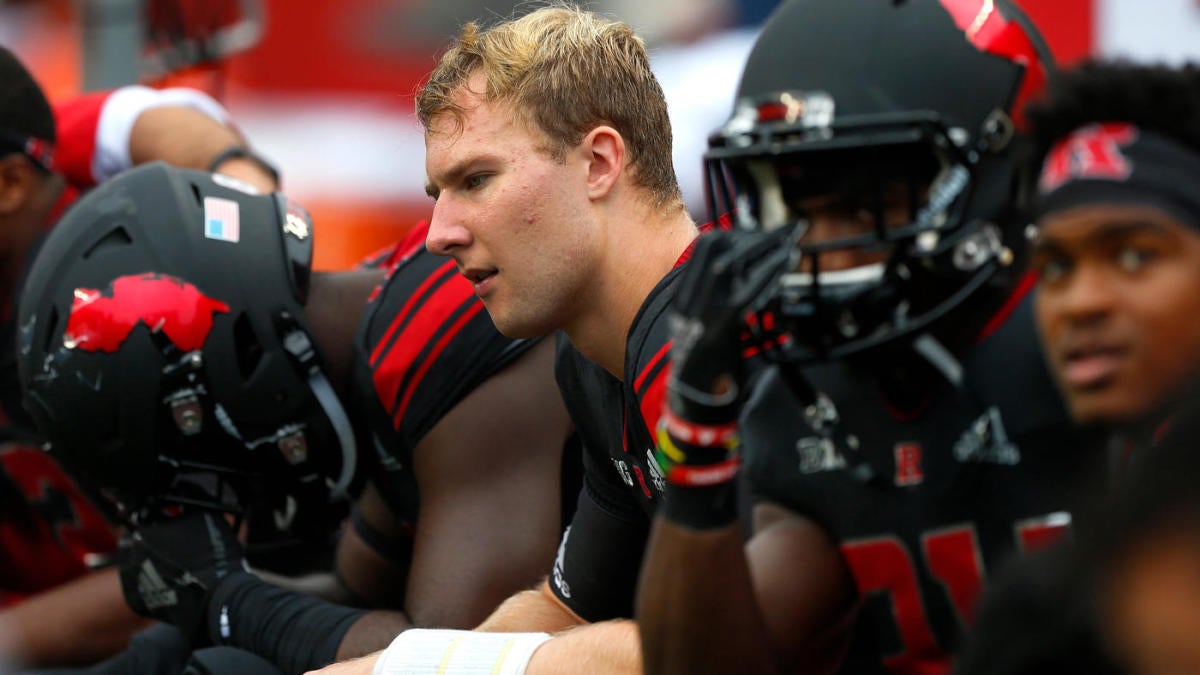 The Monday After: Why Rutgers football 'is a Big Ten program in name only'

Plus, who could be the next coach to be fired this early into the season?