Huge weekend for the Coogs that should tell us a lot about this team. I’ll be satisfied if they can win 2 of 3 over the Pirates. East Carolina enters the weekend series with an 18-12 overall record and an 0-3 mark in American Athletic Conference play.
The Pirates were picked to finish atop the league standings in the American Preseason poll, but ECU was swept by UConn last weekend to begin conference play.
East Carolina has lost four straight including a 3-2 fall in 11 innings in midweek play at No. 4 North Carolina.
The Pirates are hitting .306 as a team, led by Dusty Baker with a .375 average. He is followed by Eric Tyler’s .352 clip and team-leading 43 hits.
ECU is 33-of-47 on the base paths and is fielding .968 with 38 errors.
The pitching staff owns a 3.86 ERA and has struck out 259 and walked 111 in 270.0 innings of work.
Friday starter RHP Chris Holba is 3-1 with a 1.95 ERA, fanning 42 and walking just six in 37.0 innings.
Saturday starter RHP Trey Benton follows with a 3-0 record and a 2.09 ERA in seven starts, striking out 47 and walking 11 in 38.2 innings.
ECU is undecided about Sunday’s starter, but the Cougars could see LHP Jake Agnos, who is 1-1 with a 2.35 ERA in seven appearances and four starts. 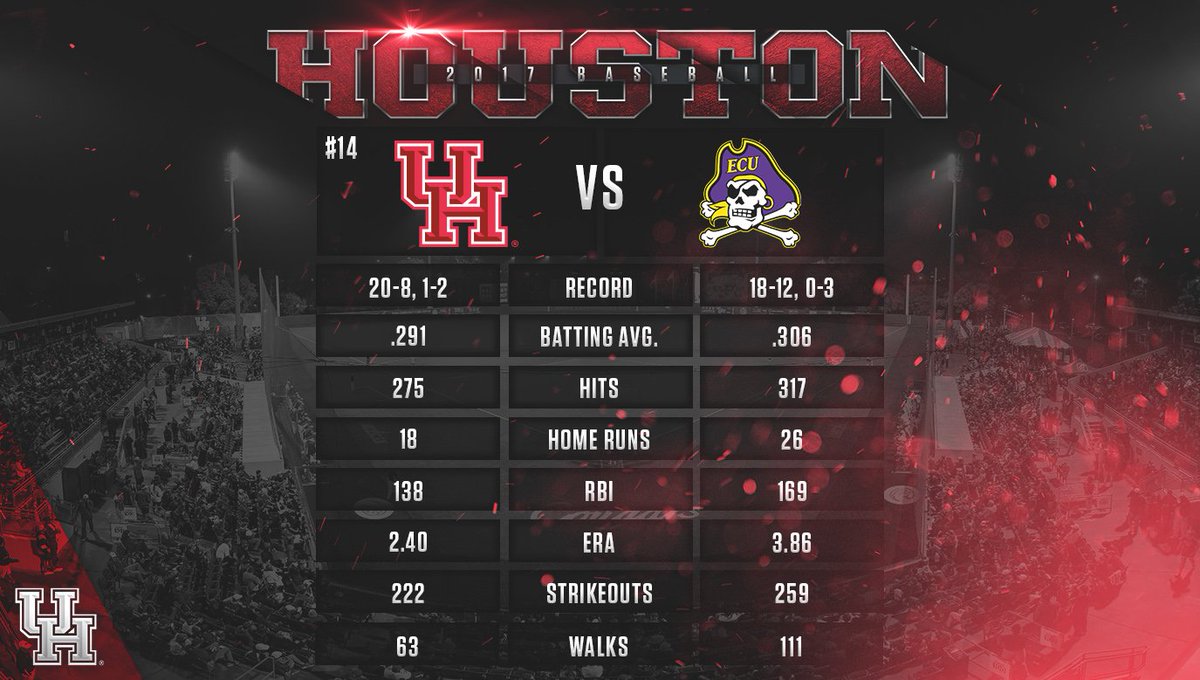 One lineup change tonight as Monacy is out and Bielamowicz is in:

Top 2nd
Leadoff double
Deep flyout to left and the runner moves to 3rd
Walk puts runners on the corners
Bunt pop out and Lockhart almost gets the runner at 3rd
Double to left plates a run, runners on 2nd and 3rd…Pirates lead 1-0
Grouder to 3rd and Triolo throws it away, run scores…Pirates lead 2-0
Hit by pitch loads the bases
Ground out to short ends the inning

I can get the softball game against UCONN on video, but can’t get the baseball game. #ShakingMyHead

I guess I’m watching softball tonight (along with the Astros).

Softball actually has a better camera, too. Sad!

Bottom 2nd
Scheiner smacks the pitcher in the face for a single (pitcher is up and walking off the field)
New pitcher for ECU (Jake Agnos who has been the Sunday starter)
Julks Ks swinging after a long battle
Scheiner steals second
Triolo singles to left, Scheiner to 3rd
Lockhart lines to left and the LF drops it, Scheiner scores, Triolo to 2nd…Pirates lead 2-1
Bielamowicz hit by pitch, loads the bases
Hollis sac fly to right in foul territory, Triolo scores, Lockhart to 3rd…Tie Game 2-2
New pitcher for ECU
Wong walks, Lockhart scores on the wild pitch, Bielamowicz to 2nd…Coogs lead 3-2
Padgett singles to right, Bielamowicz scores, Wong to 3rd…Coogs lead 4-2
BOOOM!!! Davis, 3 runs in…Coogs lead 7-2
Scheiner pops out

Nice to get a ton of runs off this bullpen.

Softball’s stream was unwatchable. Buffered every 2 seconds, but Coogs win 6-0 to improve to 3-1, 2nd place in AAC.

From UH Baseball’s Twitter:
There is a campus-wide IT outage. As of right now, there will be a stream. We are working to resolve it. Tune in to http://UHCougars.com/baseradio

Had the same buffering issue with softball; same issue I have a lot of times watching them.

Noticed they took the baseball stream off the listing for all-access.

From UH Baseball’s Twitter:
There is a campus-wide IT outage. As of right now, there will be a stream. We are working to resolve it. Tune in to http://UHCougars.com/baseradio

Yeah, started making me think I was on LSD…saw the umpire walk through the net.

And just like that, we score more runs in 1 inning than we did in the last 4 games combined.

Top 3rd
Flyout to right, groundout to short, and K#2

Bottom 4th
New pitcher for ECU
Davis flies out to left
Scheiner hit by pitch
Julks lines one off the pitcher’s hip that bounces back to the catcher and Julks is thrown out at first, Scheiner to 2nd
Triolo with a dribber up the 3rd base line for an infield hit, Scheiner to 3rd
Lockhart lines out to left