Never another one like him. This one really hurts! Grew up watching Bond movies with Connery and Moore. He was Bond for me until i saw the Untouchables. I didn’t realize till I was old that a Scottish guy probably shouldn’t have played an Irish cop.

He WAS James Bond. How can we forget Pussy Galore? He was a great actor.
https://www.google.com/search?q=sean+connery+movies&oq=sean+connery+movies&aqs=chrome.0.69i59j0i20i131i263i433j0i131i433l6.8401j0j15&sourceid=chrome&ie=UTF-8
The Man who would be king with one of his best friend Michael Caine
Finding Forester
The Russia House
The Untouchables
The Hunt for Red October
and many more…
So long Mr. Bond. The film icon, who died in October 2020, expressed some disturbing views about violence towards women over the years.

Lazy thread title. The proper way to honor Sean Connery would be Rest in Peace.

He made a how many movies uhlaw97?
How many complaints was made against him?
How long was he married to his second wife?

Was the interview done in a certain context? I frankly do not remember. 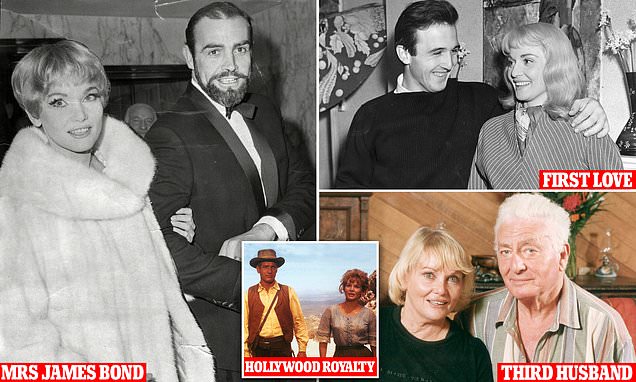 Queenslander Diane Cilento starred opposite Paul Newman and Charlton Heston in a string of sultry movie roles but she would always be defined by her 11-year marriage to Sean Connery.

Let the record reflect that you are apparently defending a guy that says it’s OK to hit a woman.

“Let the record reflect that you are apparently defending a guy that says it’s OK to hit a woman”
You call yourself uhlaw97?
Was he convicted?
What about "presumed innocent until proven guilty?
You accused me of apparently defending him?
What’s the matter with you?
There are two people that know the truth
His ex-wife and Sean Connery.
In case he did it. He belonged in jail.
Do you understand the different Esquire?
You of all people should know the difference. That is part of the first course that you take in law school.
Case closed.

Even assuming, just for argument’s sake, that Connery didn’t hit a woman (which I won’t rule out, given that he’s been accused of domestic violence), merely saying that it’s OK to hit a woman (which he did, apparently more than once) is NOT cool, and shouldn’t be defended. It should be CONDEMNED. My first post on this string merely pointed out what Connery SAID, not what he did (although that may be even worse).

Since YOU asked about “complaints” being made against him…I had no choice but to mention a pretty serious complaint against him to answer you.

But back to my original point, which concerns what he SAID (nice deflect, BTW).

Do you condemn Connery for saying such a thing…or do you defend it?

Please be candid in your response!

You bet I will condemn ANY women’s beater. By the way I have a wife and two young girls. Be candid and don’t assume anything. Argument’s sake has no legal validity. By definition it is an argument not a fact proven without any doubt.
You said it yourself “Complaints made against him” Again does that prove anything? Was there even an investigation opened against him? How many complaints are filed every day? Do they mean it did happen? You posted a b.walters itw. Again I have never seen the full interview. Did you also know that b.walters has been a close friend of harvey weinstein and jeff epstein? How is that for a so called journalist asking these questions?
There is another fact that you did not report. Sean Connery did get help from a psychiatrist. He was even prescribed LSD. What was his medical condition? How long was he a patient? Nobody but his Doctor/Psychiatrist know/knew.
Candid enough?

It is indeed proven beyond a reasonable doubt that Sean Connery SAID that it’s OK to hit a woman.

You can look up the recordings of him saying exactly that on YouTube if you don’t believe me.

There doesn’t need to be an “investigation” into that because he’s on camera saying it.

The issue here isn’t whether or not he actually hit a woman (although he’s been accused of that as well). The issue is that he SAID that it’s OK to do so, and that when I pointed that out, rather than condemning said statement and Connery for making it, you jumped up trying to defend him.

Now then, since you apparently didn’t listen the first time, I’ll ask you again:

Don’t deflect that to “did he actually hit a woman?” or anything to that effect, because that’s neither the question nor the issue. Whether Connery actually hit a woman or not is simply NOT an issue before this court, as we “esquires” (your terminology, not mine) would say.

And please be candid in your response, with the understanding that any answer other than “yes” or “no” will automatically be rejected as non-candid. This is indeed a “yes” or “no” question.

For the record, I condemn Connery’s statement, and Connery for making it.

Remember, you are on record defending Connery after it was pointed out that he made such a statement.

Perhaps if you’ll answer MY question with a “yes,” the record will be amended.

Defend what he said? Did I write that?
"You bet I will condemn ANY women’s beater" Any means Sean Connery. You betcha I condemn him for saying this. You could not understand this in the first place?
I did assume you understood it in the first place.

You may step down.

I believe you can like an entertainer for their art while not liking the person for what they are. Does it change his acting? No.

You are right on point. There is a countless number of “entertainers” including the biggest names that have been arrested, convicted and even served jail time. You do a 2 seconds search and many come up.
https://www.ranker.com/list/celebrities-charged-with-domestic-abuse/celebrity-lists
I had no clue about Dudley Moore. Very Burt Reynolds of him, you never saw Charles Bronson like that

“Zardoz” is actually kind of cool. This thread was crying for some relief and grounding, so it got a reminder of Sean’s range beyond Commander Bond.