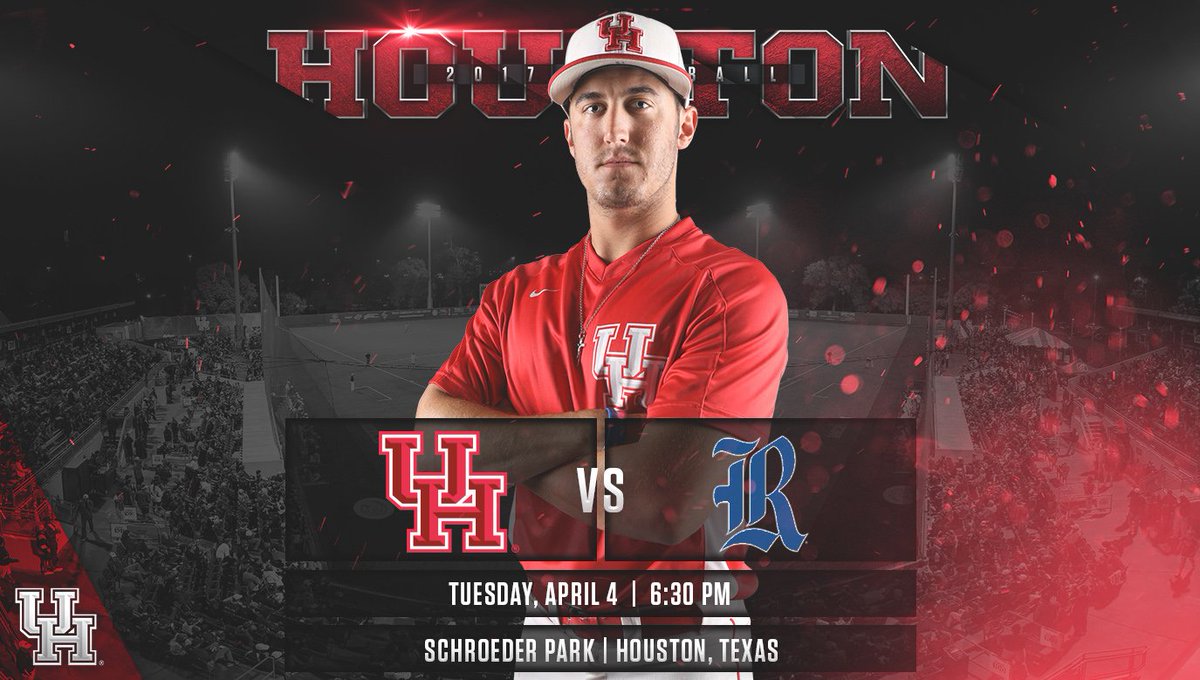 With as bad as Rice has been this year, this is a must win at this point. Rice is currently 9-21 and have lost 11 of their last 14 games. Basically, they have no pitching as they’re giving up 6 runs per game this year. Still, we can’t feel sorry for them; got to hit them early and pour it on.

Absolutely, we cannot assume anything. This is college baseball and we have, historically, challenges with midweek games.

need to make a statement not just win, really had issues at ucf this weekend.

I know it’s only one series and UCF is pretty good, but I’m really tired of looking really good pre-conference, then playing mediocre at best ball through conference. We need some momentum.

So Cumbie won’t be starting tomorrow due to Romero’s incident. Guessing it’ll be Henry or Villarreal going.

Houston Baseball returns home to Schroeder Park for four games this week, beginning with a midweek tilt vs. Rice at 6:30 p.m. Tuesday to begin the 2017 Silver Glove Series.

Whitting mentioned that the team may have been tired for the UCF series, especially the Sunday game. A bit understandable considering they went from California to Houston, to Orlando in the span of a few days.

Top 1st
Leadoff bloop double down the left field line, groundout to 2nd, and a single and Rice is on the board…Owls lead 1-0
A 4 pitch walk puts runners on 1st and 2nd
Frank Anderson out to talk to Henry
Single to center brings another run home. Runners still on 1st/2nd…Owls lead 2-0
Double plates another. Runners on 2nd/3rd…Owls lead 3-0
Ground out to 3rd
Single to center scores two…Owls lead 5-0
Single to right puts runners on the corners
That’s it for Henry as Hurdsman comes on in relief
Single off the pitcher scores another…Owls lead 6-0
Hit by pitch loads the bases
Wild pitch scores another run. Runners on 2nd/3rd…Owls lead 7-0
Flyout to right finally ends the inning

With how we’ve been hitting lately, this one may already be over. Frustrating, knowing that Cumbie should be on the mound.

I’ll be watching the Astros tonight, and may check in intermittently.

Don’t blame you. Only positive for the Coogs is that Rice’s pitchers have been pretty awful so far and their guy going tonight hasn’t been great. Coogs should score runs.

Top 2nd
Flyout to right, K, single, and a lineout to Scheiner

We just got a new router, anyone else having video trouble?

Top 3rd
Bunt out to Hurdsman, Double, bunt single puts runners on the corners with 1 out
Fielder’s Choice gets the runner at second, run scores…Owls lead 8-0
Anderson out to get Hurdsman, Pulido on now
K ends the inning