As a side note, what the hell was going on with punts today?

Winners and Losers from Week 3 of College Football

This is why we love college football. Despite the noon-game snore-fests and some expected blowouts, Saturday gave us plenty of drama—including a major upset. No... 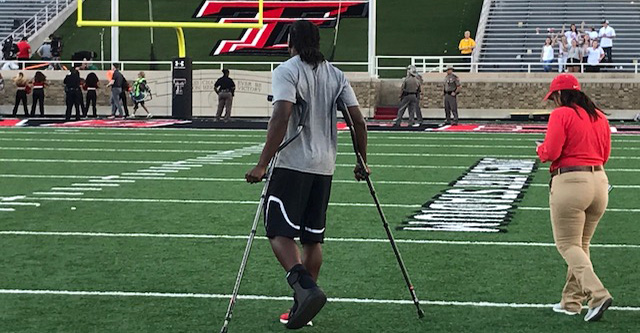 LUBBOCK - Houston safety Garrett Davis is out for the rest of the season after suffering a broken foot in Saturday's 63-49 loss to Texas Tech.

Three takeaways from the University of Houston's 63-49 loss to Texas Tech on Saturday:

I agree with all of these. Also, Briles et al. say the offense is run first. We had 6 handoffs to RBs in the first half. Sounds like he tried to make up for it during the last 6 or so minutes of the game but I turned it off by then.

Gibbs knows his stuff. I don’t know what Dakota Allen’s reads were but he was always shutting down King, Smith, and Stevenson whenever we tried any trickery with them. Kid can play.

We were playing catch up most of the way.

As we head home, take a look back at highlights from our game at Texas Tech. Looking forward to seeing everyone at TDECU Stadium on Sept. 22 as we host Texas Southern. #HTownTakeover https://t.co/ZqeZCKpb6g
section230rocks September 17, 2018, 2:20pm #11

Our first 2 drives had 0 running plays. ZERO. I maybe buy your argument in 4th quarter, but if we run 20 plus times in the first half using our "hot’ back, seems like that was Williams this game, then maybe we change the nature and tempo and, perhaps, the outcome. But we’ll never know because they didn’t do it.

Some of it(about 20% Id’ say) is on the offense as well. Don’t forget we we’re up by two touchdowns and had possession of the football looking at 3, at one point. We need to fix that because we have some teams in this conference with better defenses than tech.

At least this says that he can still petition the NCAA for a sixth year. Hopefully they will accommodate.

I thought we were as well but we were never up two scores. He had a couple of chances and we blew the opportunity. Much like having them 3rd and 20+ a couple times and blew that.

I feel we were on the verge of breaking the game open with each of those things but we could never execute.

He should be able to do so. Case got a 6th year and he played more than Garrett.

I thought we were as well but we were never up two scores. He had a couple of chances and we blew the opportunity. Much like having them 3rd and 20+ a couple times and blew that.

My fault. We we’re up by a touch down with the ball with 7 minutes to go in the 2nd. As I remember it felt like two scores because the defense made two consecutive stops before that.

Houston running back Terence Williams (knee) out 3 to 6 weeks

What the heck!?! I watched the entire game and don’t remember seeing him go down with an injury. This game just continues to suck well after the game ended.

What the heck!?! I watched the entire game and don’t remember seeing him go down with an injury. This game just continues to suck well after the game ended.

Might have been preexisting. Took him a while to see caries in the previous two games as well.

I don’t like seeing anyone go down but I hope it opens the door for Burrell to get some carries against TSU.

I would hope he would get carries against TSU anyway. I’m hoping errrrbody sees playing time this weekend.