ON DECK | Top-25 Matchup this Weekend at Home ... Coogs Welcome in No. 7 Cal State Fullerton for Three | UHCougars.com/tickets #M64 https://t.co/UwujQ5ABFm 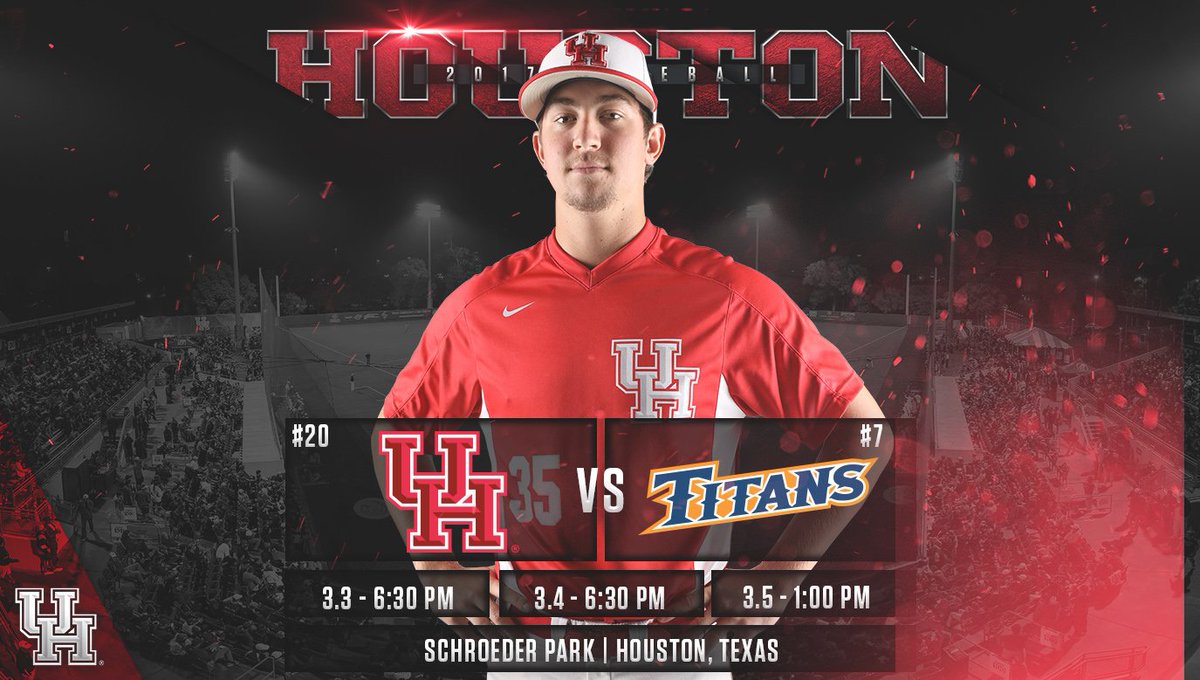 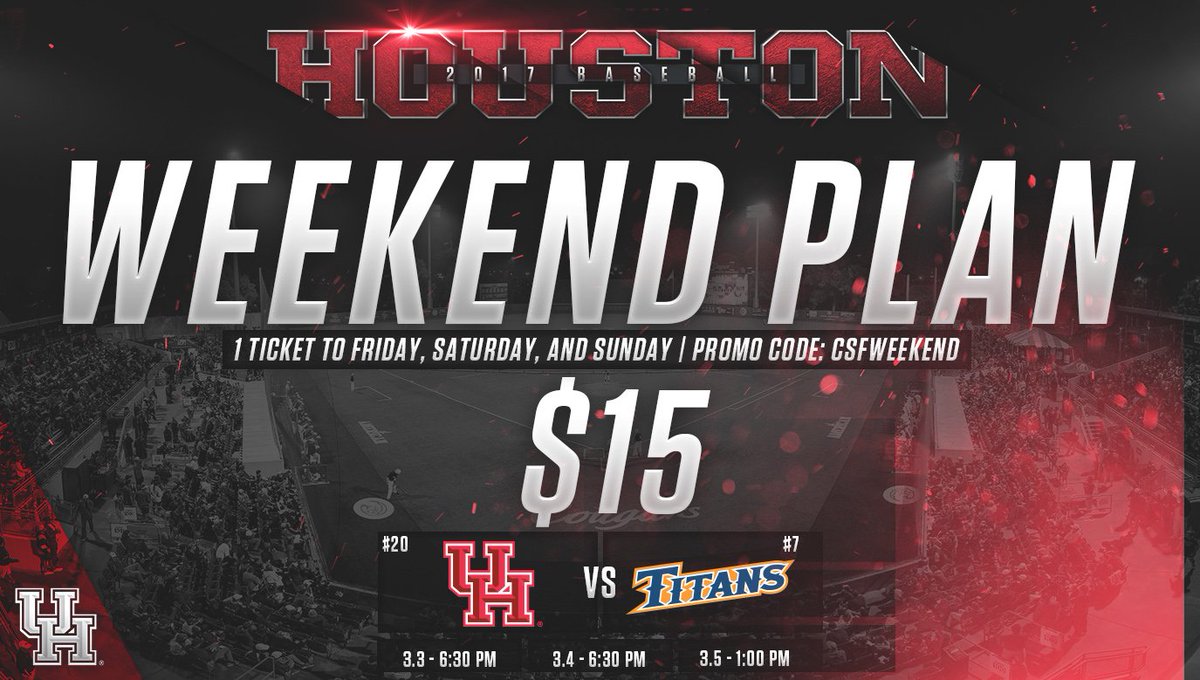 Cal State Fullerton is 4-3 on the year and has won series vs. Stanford and UNLV.
The Titans are ranked in every national poll and as high as No. 7 by Baseball America.
CSF is hitting .220 as a team with 52 hits, 17 doubles, two home runs and 28 RBI, while slugging .326.
Taylor Bryant’s .458 average, 11 hits and eight RBI lead the Titans offensively.
The pitching staff is one of the best in the nation, owning a 1.97 ERA with 54 strikeouts to just 13 walks in 64.0 innings this season.
RHP Connor Seabold is 1-1 with a 2.77 ERA and has nine strikeouts in 13.0 innings as CSF’s Friday starter.
RHP John Gavin is 2-0 with a 0.68 ERA in two starts and is slated to throw on Sunday.

By the Numbers | @UHCougarBB vs. Cal State Fullerton #M64 https://t.co/u9FOJXAxDy 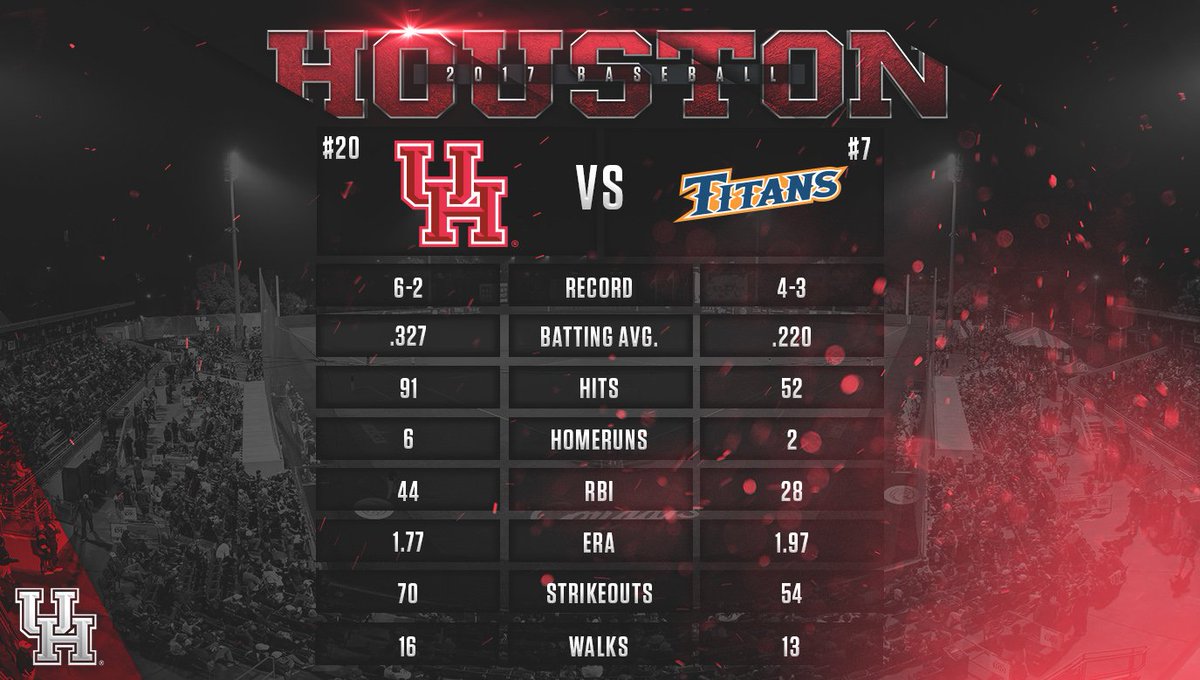 They will have to work to keep up this offensive explosion against a Titans team that is ranked No. 7 in the nation with a 1.97 ERA. Led by junior right hander Connor Seabold (1-1, 2.77 ERA), the Titan rotation features three of the most dynamic arms in baseball.

Together with Seabold sophomore right Colton Eastman (0-0, 2.00) and junior southpaw John Gavin (2-0, 0.67), the Titans represent the best one through three the Cougars are likely to see all season.

The series should be quite the pitcher’s duel though as the Cougars rank slightly ahead of the Titans in almost every category. Ranked No. 4 in the NCAA with a 1.77 ERA, the Cougars are one of the few teams that can match the Titans arm-for-arm.

CTW says we’ll be making the return trip to Fullerton next year. Not surprising, but good to hear it confirmed.

Continue with what’s working; 3rd straight game with this lineup:

Game delayed a bit due to video issues

Wow, video and audio are in good shape tonight on all-access. 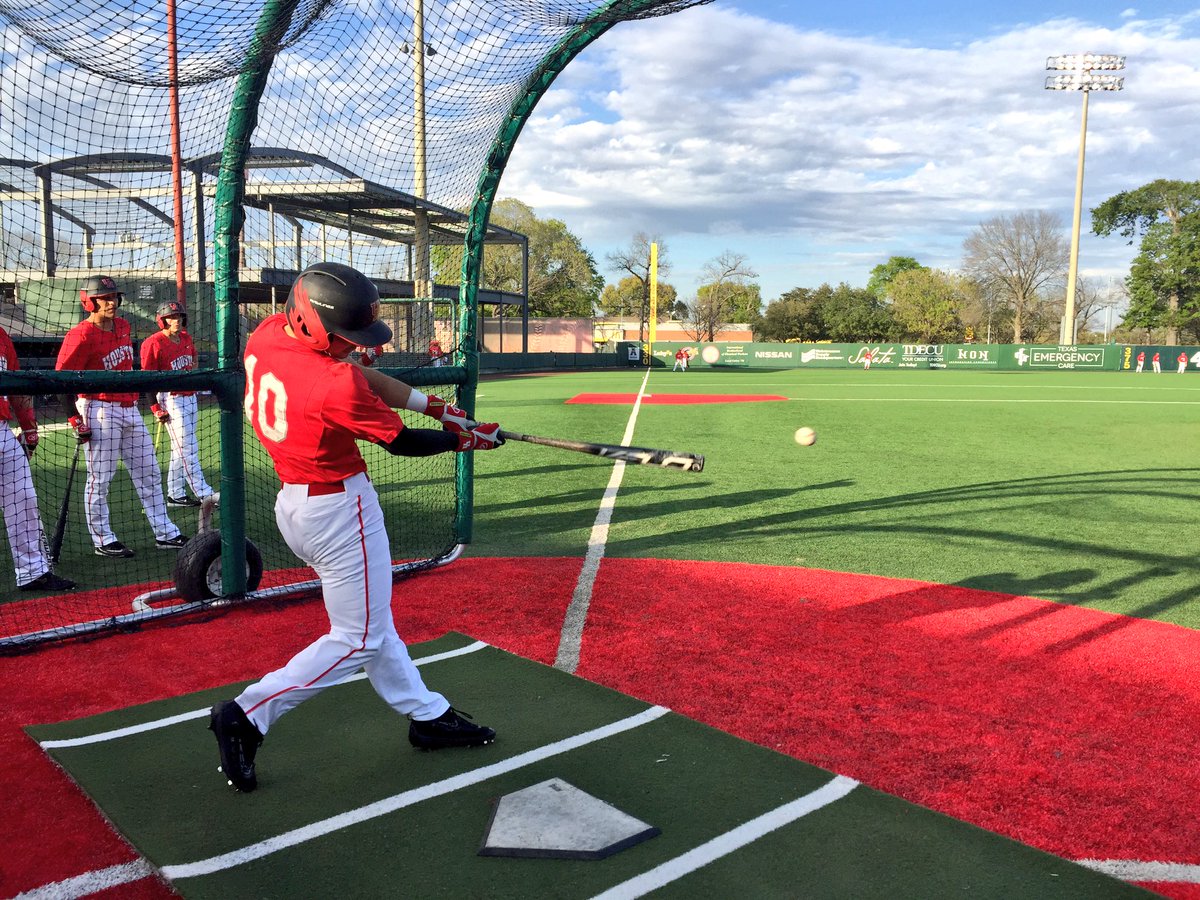 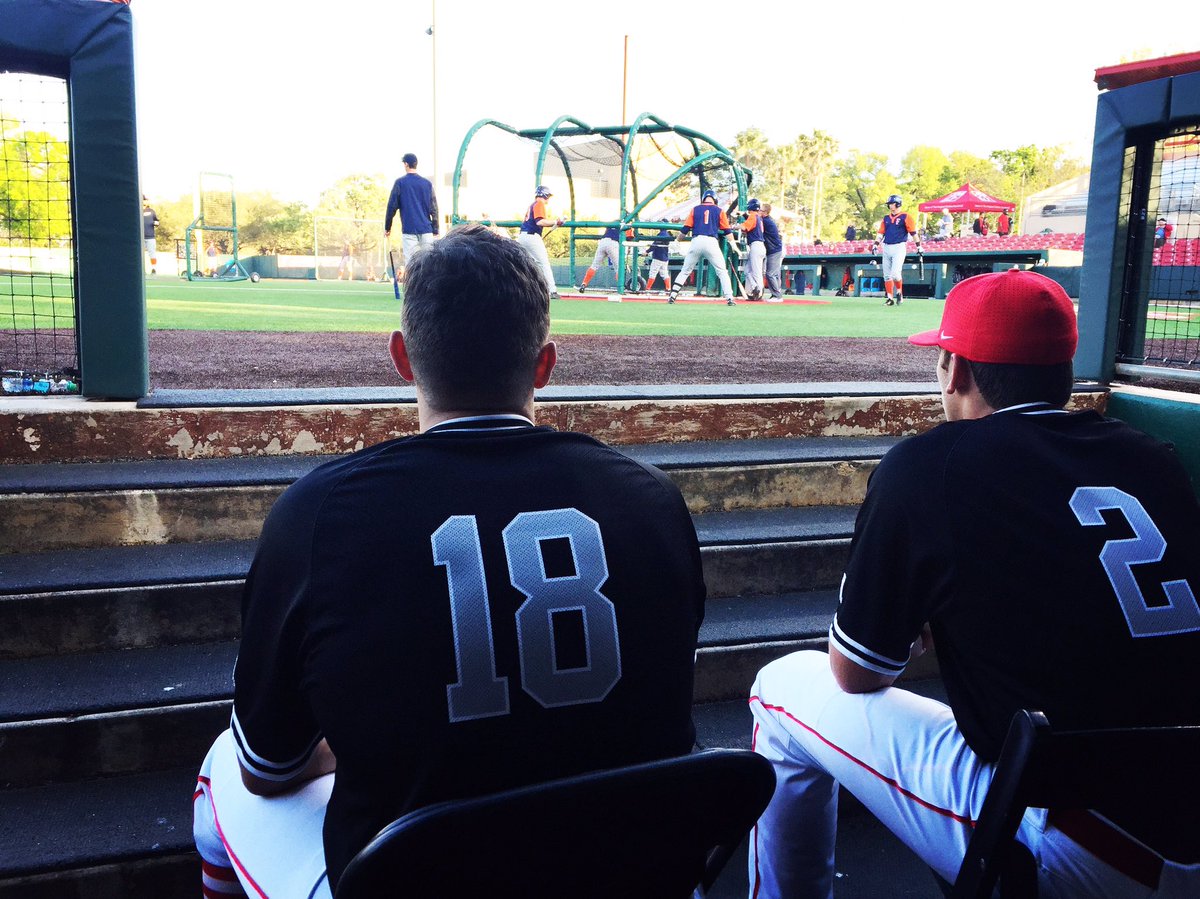 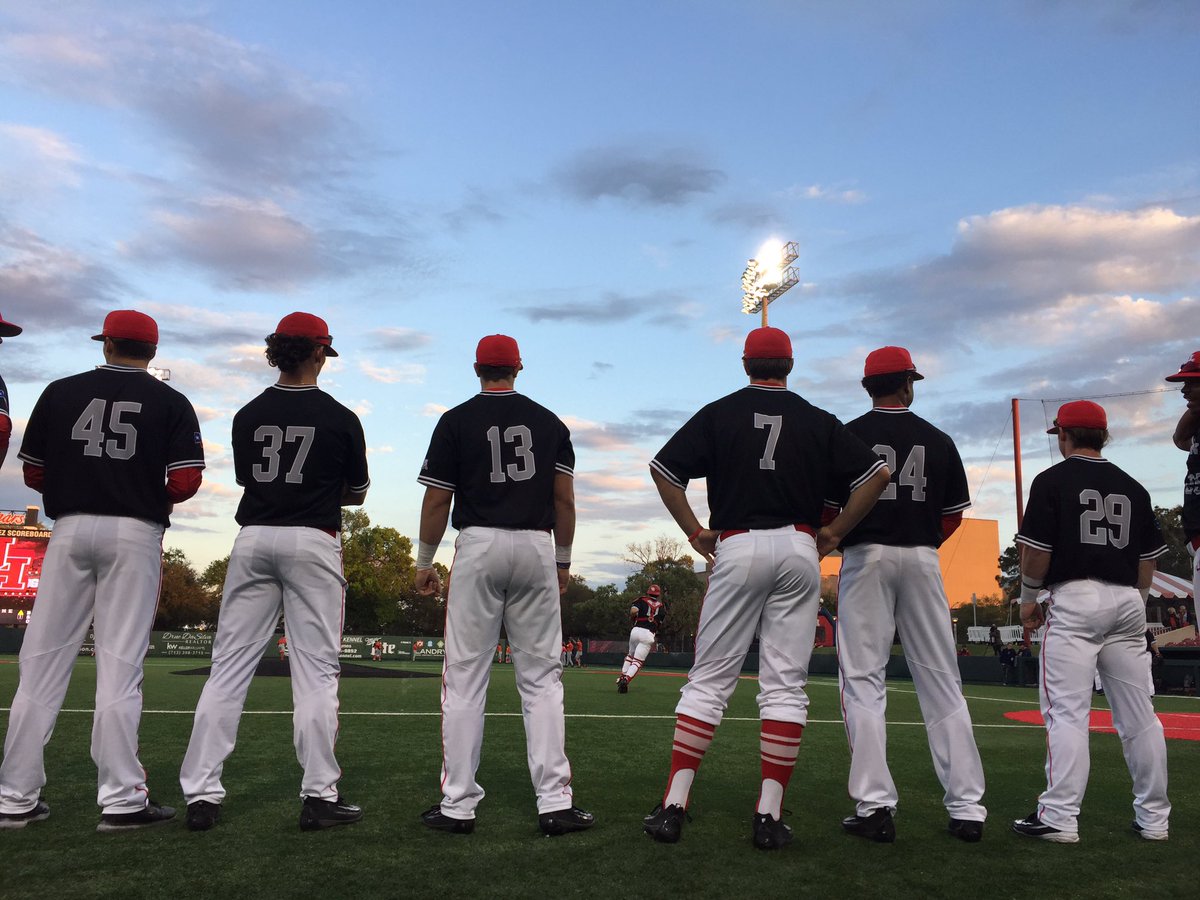 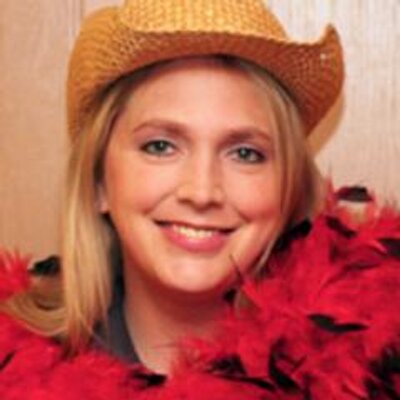 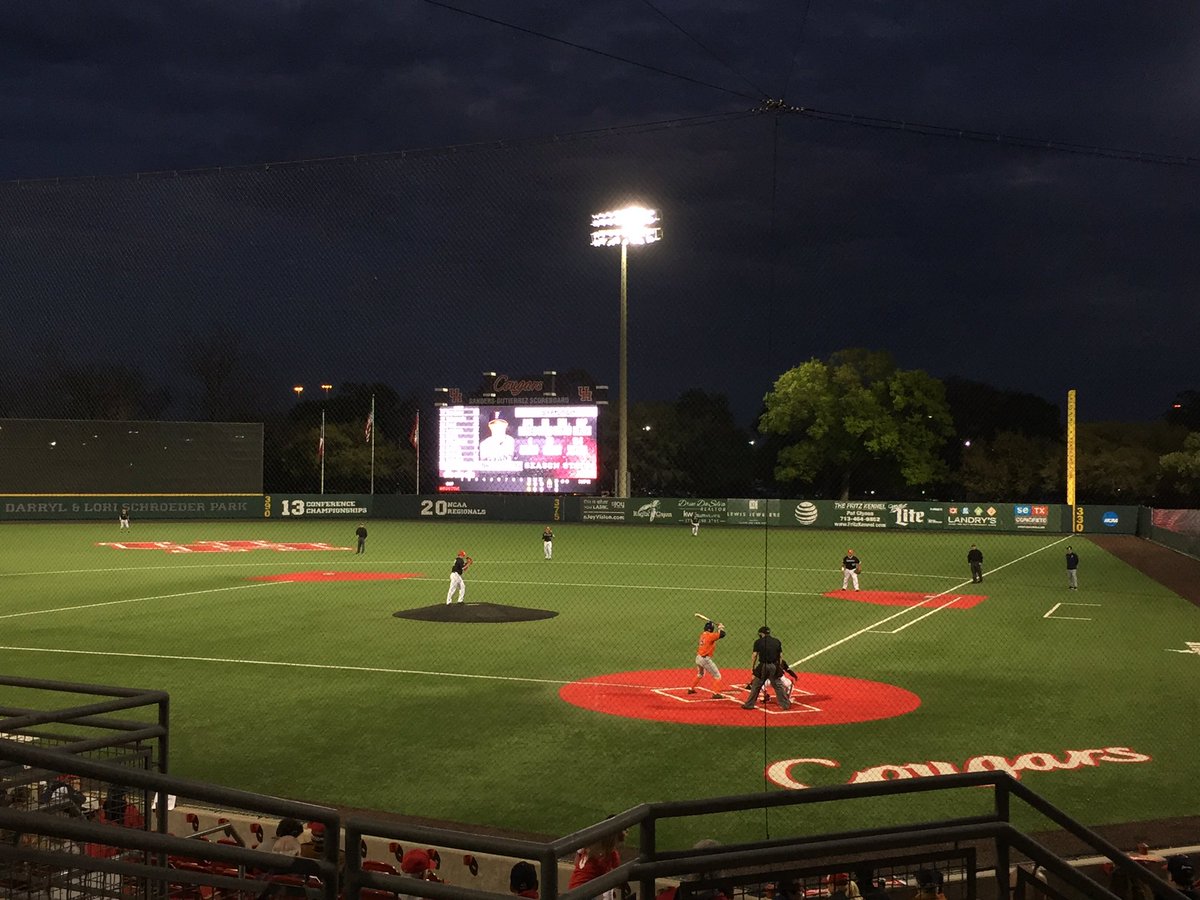 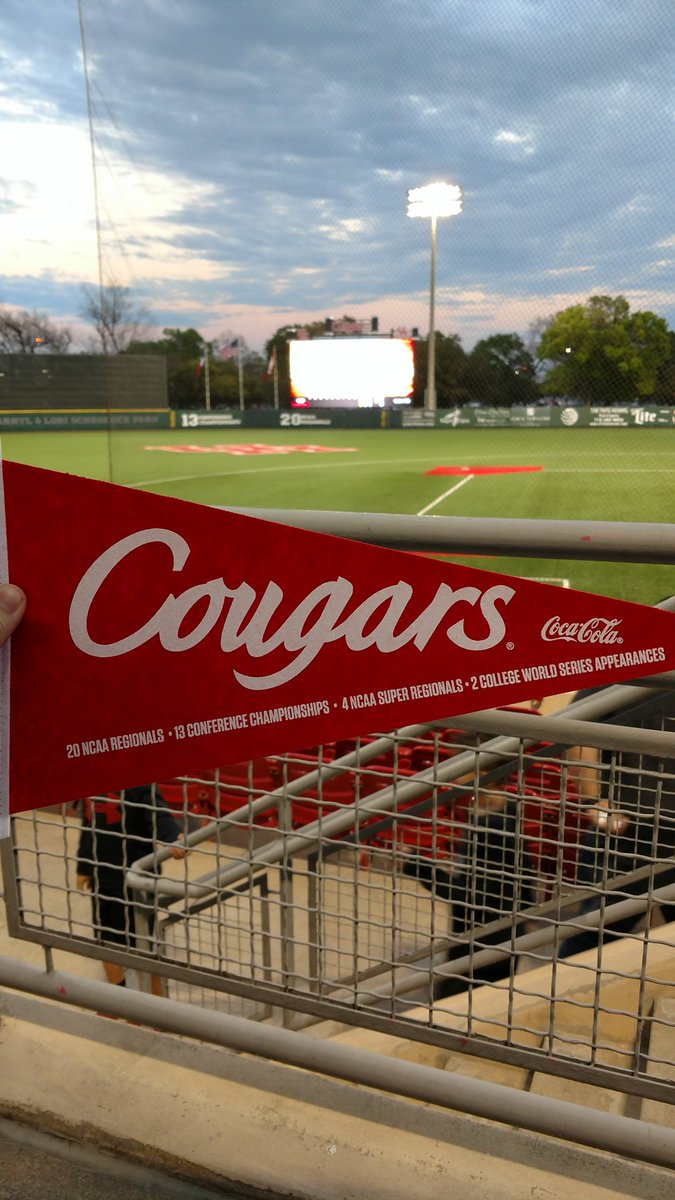 Top 1st
A foulout and 2 Ks as Romero retires the side in order.

Bottom 1st
Wong walks
Padgett with a bunt single to third, Wong to Second
Davis singles to center…Wong scores, Padgett to 3rd…Coogs lead 1-0
Scheiner K’s swinging for the 1st out
Lockhart sac fly to left scores Padgett…Coogs lead 2-0
Triolo lined out to Right after a long battle. Both Lockhart and Triolo battled.

Top 4th
Single, fantastic play in Right by Lockhart for the 1st out, groundout to Romero moving the runner to second and then a double to Left Center scores a run…Coogs lead 4-1
Flyout to left ends the inning.

Fullerton is starting to get around on Romero, need to keep scoring