AUSTIN - As catastrophic flooding continues to devastate the city and region, the University of Houston announced Tuesday that its season opener at Texas-San Antonio has been postponed. UH coach Major Applewhite said playing a game "wasn't the right...

In separate statements, UH and UTSA said they will explore making up the game at a later date. UH has offered to play on Dec. 2 - if neither team advances to its respective conference championship game - but UTSA has yet to agree, a person familiar with the talks said.

In addition, UH announced that none of its athletic programs will travel this weekend, among them volleyball, soccer and cross country. The university has cancelled classes until Sept. 5.

The UH football program is working on a plan to set up two drop-off points in the Austin area for people to donate items. The school has commitments from “four to six other schools throughout the state” that are playing home games this weekend - a group believed to include Texas Tech, Baylor, SMU and TCU - to make available their 18-wheel travel trucks. UH players will assist loading up the trucks before returning to Houston.

. @CoachApplewhite on postponing season opener: 'Officials from both schools felt it wasn't the right thing to do' https://t.co/cGSR7Tonfq

Houston coach Major Applewhite: 'We have to take a step back. It's not about us, it's about our city.' #HoustonFloods https://t.co/j88Hy30bgl

Houston safety Khalil Williams: 'It's tough being here knowing you can't be at home to help. That's my home city.' https://t.co/34IPmG8aRY

Major Applewhite: 'Houston is across our chest for a reason. It’s our city.'

Major Applewhite: ‘It's about the people in our city and helping our city right now. We’ll get to football.' 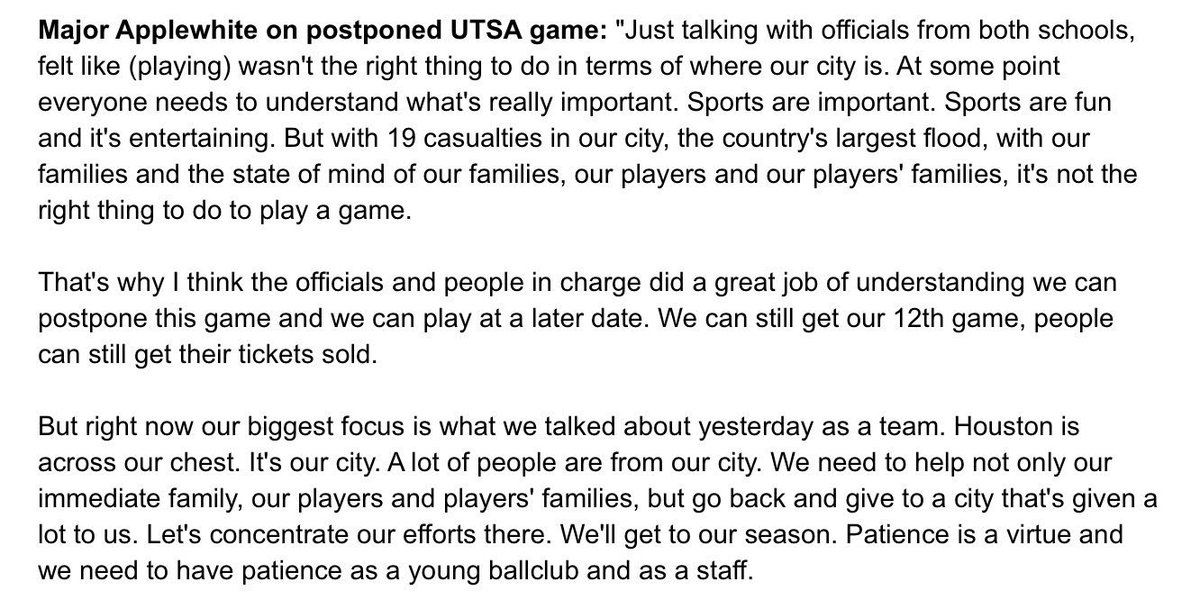 . @UHCougarFB @CoachApplewhite update when team may head home: 'As soon as possible. We're not trying to keep anybody from their home.' https://t.co/R20b4ja4CM

Has anyone received info on ticket refunds?

Has anyone received info on ticket refunds?

I live in San Antonio, and my uncle is a prominent donor for the school. I just got off the phone with the UTSA Ticket Office. The truth is this… UTSA athletic administration is not happy UH cancelled the game for two reasons. 1) It causes a logistical nightmare for them. 2) The team was in Austin and technically could have played the game. However, the administration can’t come out and say this publicly… at all. They are distinctly aware of how callous they would appear in the wake of the Harvey disaster. They are frustrated because all of the other Houston area teams, FBS and FCS are playing, especially the away teams.

They are still deciding what to do, but it is leaning towards cancelling the game for the year. They don’t want to schedule Dec 2nd tentatively, and then have to cancel because either UTSA or UH is in a conference championship game, which is a likely scenario for both teams. To take it a step further, UTSA is considering cancelling the rest of the series under pressure from some fans, or at least force UH into a situation where we have to come to San Antonio before the return game to Houston in 2022. There is an opening in 2019 and 2020 for both UH and UTSA. Scheduling in 2019 would force UH into three away games for OOC schedule, so 2020 is more likely.

As far as refunds, the ticket office expects information on a final decision “soon”, as in before the end of the week. Nothing is assured at this point. If the game is canceled, a full refund will be made. If it is moved, tickets will be honored, but I highly doubt a refund will be issued for people who can’t make the reschedule. My understanding - it is Dec 2nd or nada. My guess is if there is a reschedule, UTSA is going to ask for a minimal fee for the loss of revenue this year.

Thanks for the info, but here is the point your administration is missing. Give your concern for the game to the thousands who had their home flooded. To the students at our Greek dorms who have to find new places to live. Frankly they have far more important things to worry about than going to a non-confernece game. It is not about whether or not the team can play. People first. We have clean up to do and frankly we don’t have time to feed UTSA belief of a win. It’s not about the game is about focusing on the people of our City. I am sure you have a good team and playing UH in a close game would have brought attention to your team, but we don’t have time for politics and backyard squabble. Good luck the rest of your season.

If the game is played, I will use the tickets. If the game is cancelled, then I will donate any refunds to UTSA directly. This is a sunk cost for me. UTSA sets budgets off of home game revenues and this was their biggest game.

Dude… I am a Coog fan. Hell no, that is not MY administration.

You’re right. Sorry I got worked up. My fault! GoCoogs!

To take it a step further, UTSA is considering cancelling the rest of the series under pressure from some fans, or at least force UH into a situation where we have to come to San Antonio before the return game to Houston in 2022. There is an opening in 2019 and 2020 for both UH and UTSA. Scheduling in 2019 would force UH into three away games for OOC schedule, so 2020 is more likely.

Scheduling them in 2020 would put us at 3 away OOC games as well.

This just seems like pettiness on their part for losing their big ticket game this year. If they want to play hardball and throw their little fit, let them cancel the series. We can find a number of other schools to fill in the “Texas/local G5” spot on our schedules.

I don’t give two flying humps if we ever play these guys. Frankly, I was never on board scheduling this arse or rice. moon

And I keep seeing the “every other FBS and FCS team is playing this week” comment which is BS.

Wonder if the UTSA fans complaining paid attention to the fact that the Texans and Cowboys cancelled their preseason game.

I would much rather play Texas State than UTSA. The fans are much better.

Thanks for posting this. I’ve heard this complaint as well, and have wondered about the validity of it.

I think I’ll be rooting for Baylor week 2

Out here serving and cooking for the first responders and volunteers helping around the community! https://t.co/rvJ8VCghls 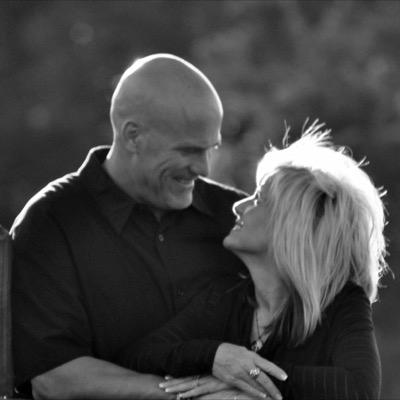 U of H Volleyball team and football players opening up their hearts in our neighborhood. You are a blessing! @payhaslam5 @UHCougarFB https://t.co/f3zHKlJXYS 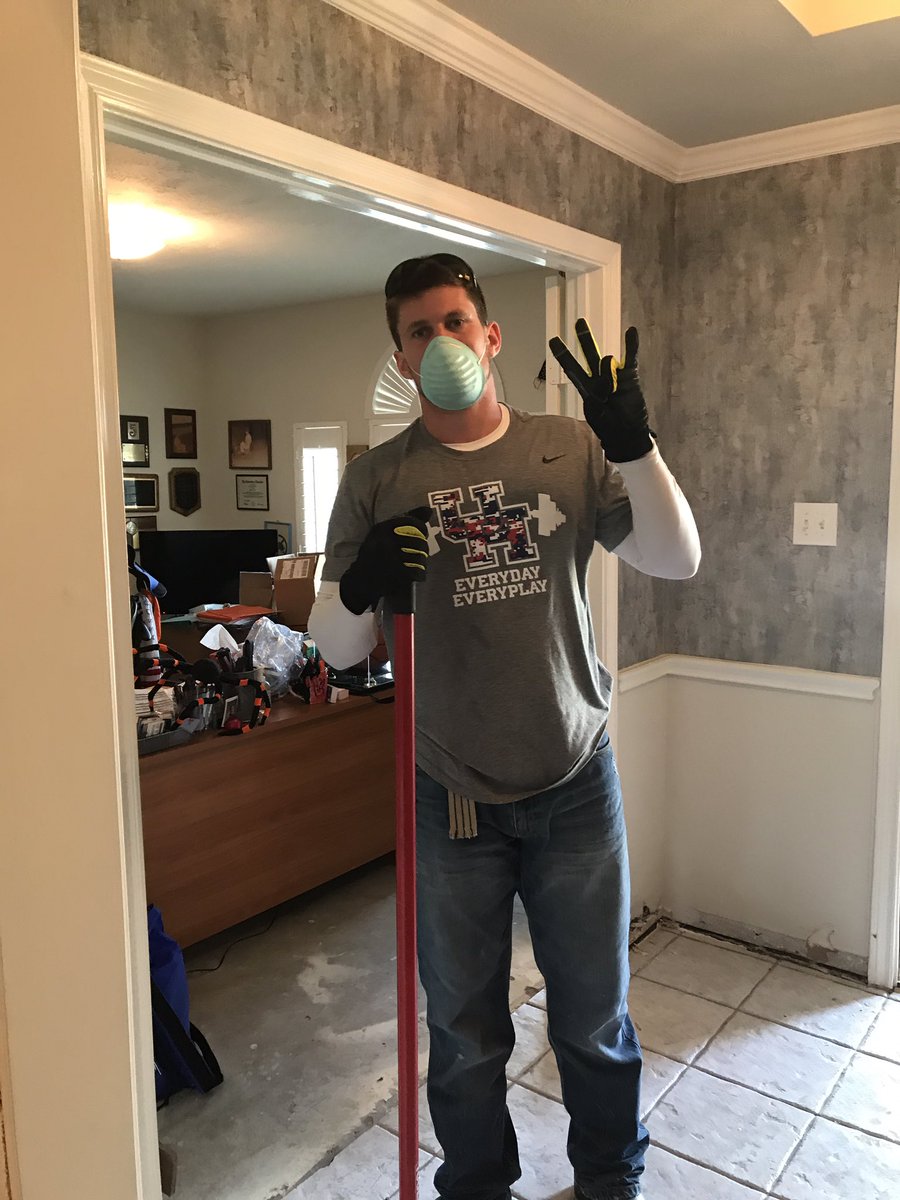 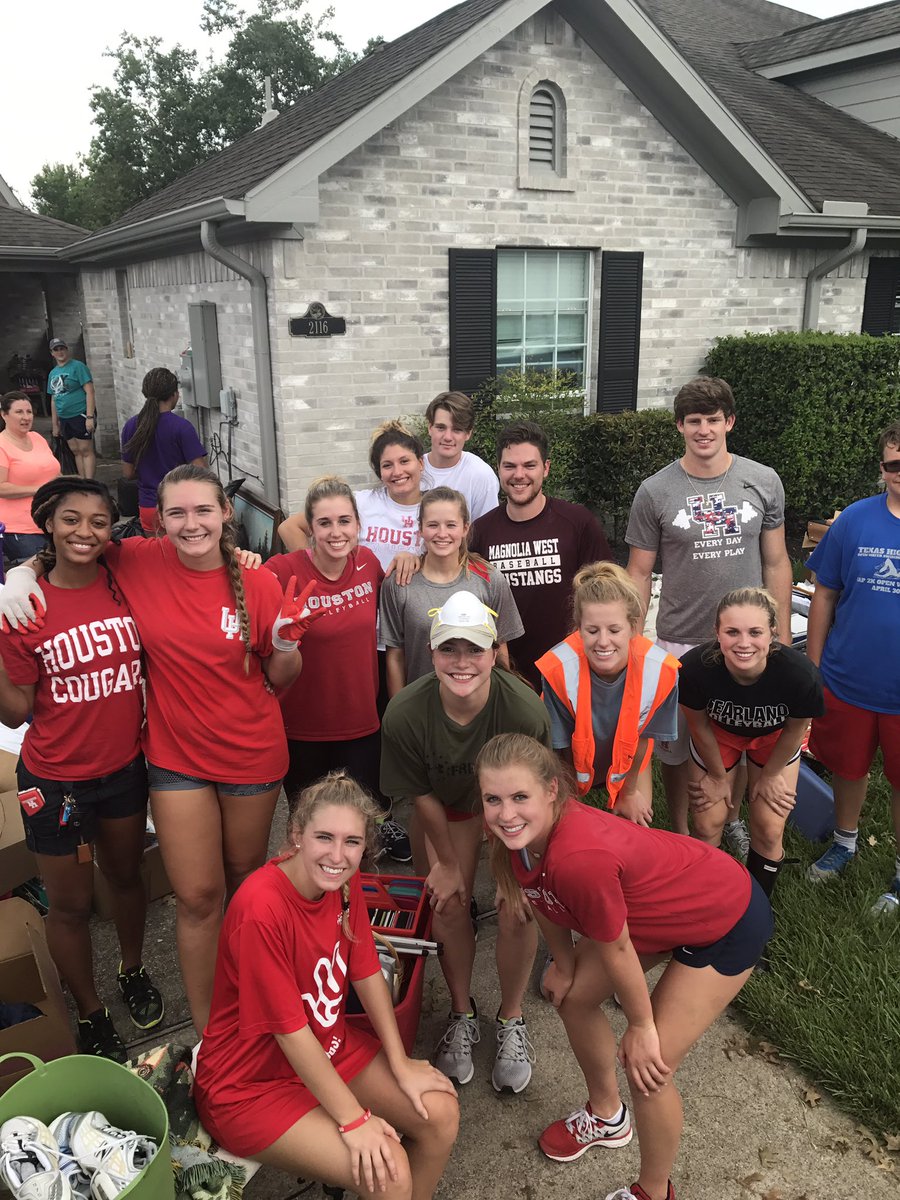