I came across this article from January 2020. It’s interesting that there is no mention of this anywhere. Jack McDowell told a Charlotte radio station the White Sox had a system in the late 1980s involving a light in right-center field, a toggle switch in the manager’s office and a camera zoomed in on the catcher.

It was discussed some went it came out. But nothing went further with it.

There was an article not too far back that said that the Commissioner laid down a blanket prohibition on this sort of thing shortly before that season.

I understand he said something along the line that it won’t be tolerated any more and punishment will be stiff.

So I don’t think there’s any serious dispute that lots of teams have cheated in the past. But I gather that teams were warned that it wouldn’t be handled as gently going forward. And the Astros were the first to test that warning.

I have no problem with strict punishments. And I’m not sure that this punishment was that strict. How many players lost a season?

And the Astros were the first to test that warning.

What percentage are you sure of this? Carlos Beltran himself said that the Astros were “behind the times” with stealing signs when he came on in 2017. He was with the Yankees before that. The article I posted was from 1980. There are more articles that have evidence of similar things going on around the game since the beginning of the century. The Astros were not the first ones to do this. They were just the ones that had someone rat them out. It sucks that they cheated but this was a league wide issue that the commissioner doesn’t want to have a full on investigation with and so he was hoping to pin it on one team and brush the rest aside.

The other problem that I have with this is how everyone around the league acts like the Astros are horrible scumbags but yet this same thing happened around the league and probably in their organizations. Oh and once said Astros become free agents, the “cheater” tag goes away and they are celebrated. The real issue is that they don’t want to lose to the Astros. Period. Like the Seinfeld episode, “They’re rooting for laundry”.

People only care because the Astros won the WS. If the Texas Rangers had gotten caught banging trash cans it would’ve garnered a much smaller reaction.

Does anyone think Tom Brady was the first to make his footballs a little low in pressure? The Patriots the first team to spy someone else’s practice? Nope, but they’re the biggest and baddest on the block, and knocking them down gets a lot more viewership than noting that a team like the Jets cheated.

What percentage are you sure of this?

Like I said, I have no doubt lots of teams have cheated. But I am sure that the warning from the Commissioner came down right before the Astros WS.

Found this, a pretty thorough article about everything going on in 2017, including a warning in mid-September 2017 from the Commissioner that severe fines, including the loss of draft picks, would come if cheating continued…and the Astros continued.

People only care because the Astros won the WS. If the Texas Rangers had gotten caught banging trash cans it would’ve garnered a much smaller reaction.

Do you know how ridiculous that sounds?
So then, essentially what this is saying is “cheating isn’t bad as long as you don’t win a championship over my team. Otherwise, cheat away.” So cheating isn’t the problem then and everyone can get off of their high horse. Also, the disdain the Astros players received was huge. Are they worse than other players around the league because they cheated a couple of months after the warning as opposed to a few months before the warning? It’s just so stupid to me how fans act like the Astros are worse than their team’s players because of WHEN the cheating occurred. Cheating is cheating.

Found this, a pretty thorough article about everything going on in 2017, including a warning in mid-September 2017 from the Commissioner that severe fines, including the loss of draft picks, would come if cheating continued…and the Astros continued.

This is video from 2018, mysteriously showing a Yankees staffer with a camera pointed at the catcher. Somehow, they brushed this aside and kept it quiet. Just because the Astros were singled out, doesn’t mean this crap wasn’t still going on around the league. In fact, it’s probably why the commissioner (Who grew up going to Yankee games with his dad) singled out the Astros, in order to get the other teams to stop. It’s probably also why it’s taking so long for that infamous “Yankees letter” to get out, since the Yankee sued to keep it closed. Just because you don’t hear about it in the media, doesn’t mean this crap wasn’t going on even after 2017.

I am still waiting on an official statement from MLB on this video that my sources say is of the Yankees cheating in 2018. #YankeeGate https://t.co/J7SfEV79Mv

Also, The White Sox won the World Series in 1983 with LaRussa. Should we question that title? Don’t get me started on the 90’s Yankee Championships with all of those steriods users.

And just for reference on why it’s hypocritical of MLB to only come down on the Astros, here is a history of cheating in baseball all of the way back to the 1900’s: 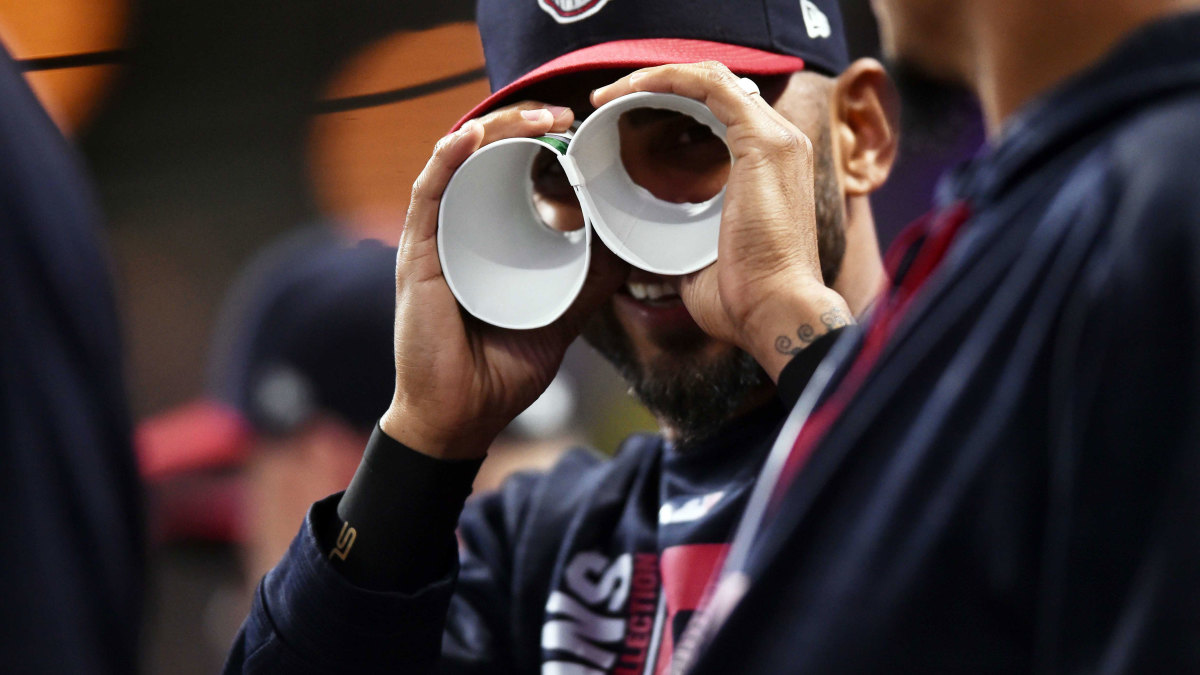 How MLB Handled Sign Stealing Before Punishing the Astros

The history of illicit sign stealing in MLB can be separated into a "before" and "after," with Sept. 15, 2017 being the dividing line.

If they come down on the Astros, then they shouldn’t half a** it. They should get congress involved like they did with the Mitchell report and thoroughly investigate every team.

If you hear a trash can pounded on every pitch and you suspect they are stealing your signs, you flash the duece and throw the fastball up and in. A couple of those and the sign stealing is over.

The whining on this is incredible. “We were stupid, no fair. Mom the Astros aren’t playing nice.” It is baseball, cheating is at the core of the game. If you ain’t cheating, you ain’t trying.

I hated that the Astros slunk on this. They should have gone full blown Al Davis Raiders and kept everyone, serve the suspension, pay the fine and let everyone think you are coming up with something else. That is worth a run every game. Plus your gear becomes a hot item.