Five Coogs will be in the Olympics, most since 2000. I would say the best shot for a medal is Shaun Maswanganyi in the 4x100 relay for South Africa (they have two sub 10 guys including Simbine who might medal in the 100). First event to watch is the opening ceremonies as it should be easy to see Burke and Evelyn since they are 2 of only 8 athletes from Barbados. The University of Houston is set to be represented in Tokyo at the Olympic Games by five athletes who currently attend or did attend the University. The games are

Olympians | Medalists |  By Country A total of 68 current or former Cougars from 19 different countries have participated in the Olympics. Houston has had at least

Good list of Cougars but Dwight Jones did not win a gold medal in 1972. The U.S. lost in the final.

Good catch. Technically he doesn’t have any medal since they refused the silver.

Coogs start tonight. Evelyn should run the 100m first round some time between 10:15 and 11:15pm central time. Micaela Bouter will dive starting at 1am.

I just watched the Women’s 100m Prelim round. I’ve never watched that round before (was it ever televised before?) Very entertaining.

Nobody setting the world on fire, but they are all Olympians. Good stuff. I’ll have to watch the men’s prelims too.

Sixth place for Tristan Evelyn in the heat, 11.42 seconds. I was just watching the men’s 10K finals (African runners went 1 thru 4, but American Grant Fisher was 5th). I think they said Fisher had a relative who ran for Houston during the broadcast?

I watched the last six laps of 10k but missed that reference.

I read on Twitter that USA is appealing the DQ in mixed 4*400 relay… arguing that Irby was placed at the wrong exchange line by an official.

I saw in the second race that Brazil almost did the same thing, but the 2nd runner came running in at the last second to legally grab the baton in the exchange zone.

Definitely very strange. Irby had to notice she wasn’t lined up with the other runners, right? Wow, that was bad. Yeah I don’t know how the runner wouldn’t know that is the wrong spot. We find new ways to continue to disappoint in the relays. The men’s relays and this mixed relay were supposed to be easy golds. Already prepared for a dropped baton in the 4x100.

USA mixed relay team reinstated, along with Dominican Republic, after both were initially DQ’d.

USA and DR will race in tomorrow’s Finals.

I haven’t seen any official explanation yet.

Burke and Shaun should run sometime between 5:45am and 6:35am central. I don’t think I will get up that early. Maybe up by 7 to watch USA basketball and the mixed 4x400 relay.

I found a reference to it here. His mom Sonia ran track at Houston - it doesn’t mention her last name but she ran 2:10 in the 800 and 4:31 in the 1500 which is pretty fast and probably still is on the top times list. So it shouldn’t be hard to find her name.

Grant Fisher: Having A Ball

Shaun Maswanganyi advances with a 10.12. He will be in heat 2 of the semis along with Trayvon Bromell who is the overall favorite. Start time is 5:23am central tomorrow. Finals will follow at 7:50am. Survive and advance ➡️ Shaun Maswanganyi takes third in his heat of the 100-meter with a time of 10.12 and will head to the semifinals! #HTownSpeedCity | #OlympiansMadeHere | #Olympics https://t.co/FjOgRytH0W 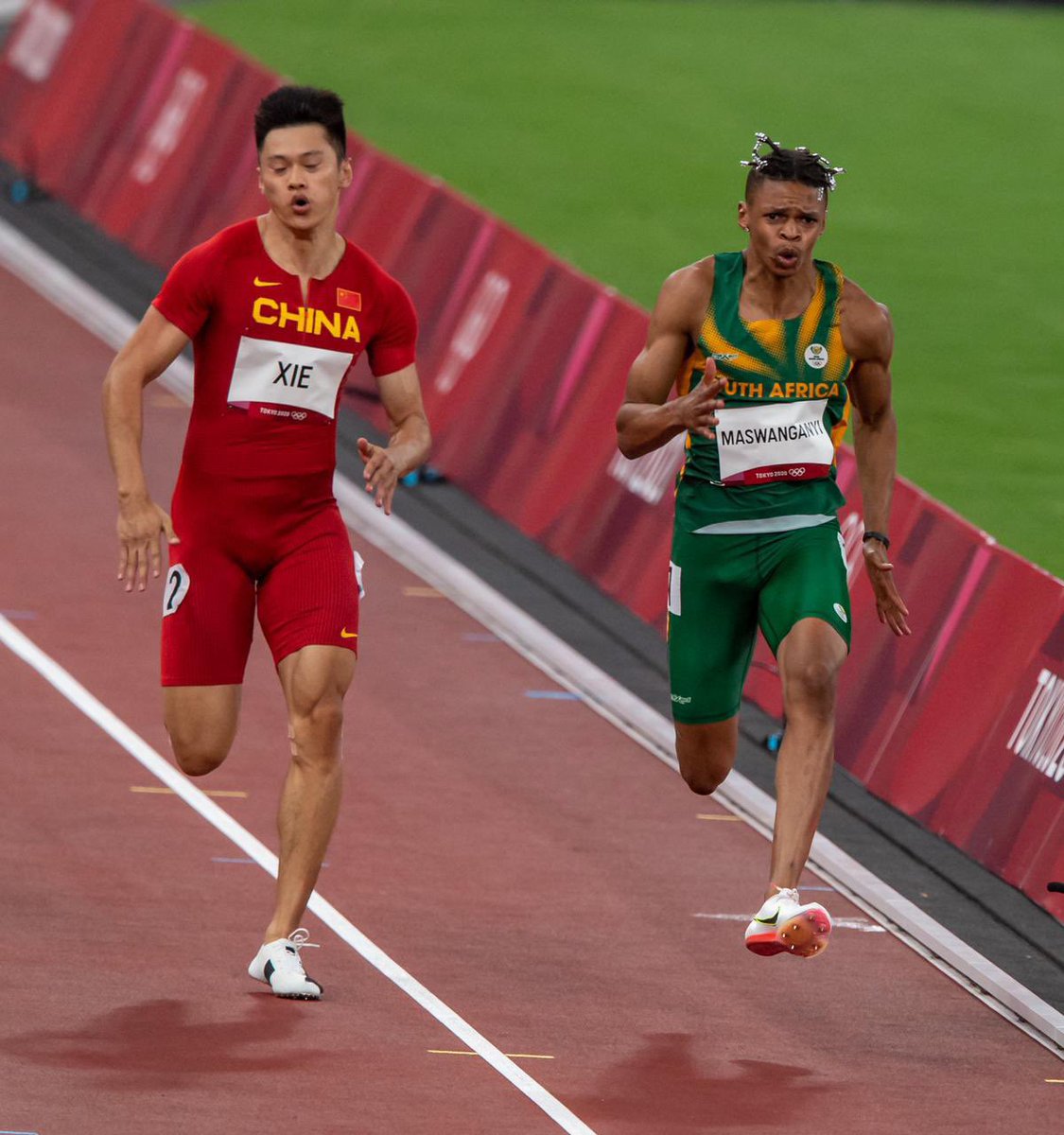 I was able to watch a replay late this morning. As they introduced Shaun, the announcers gave a nice shout out to UH, Leroy Burrell and Carl Lewis.

Also, Mario Burke did pull up, looked like his hamstring. Did it less than 50m in. He limped to the finish line.

Where are you getting replays? I like all the options for live coverage, but haven’t found an easy way to watch events later.

NBC Sports app. I believe you have to sign in with a cable provider (I use Sling). It’s pretty good for live, you can pause it, but once a broadcast ends they cut it off.

For replays you can go to “Results” and then the event and hit “Replay” button. It’s not perfect, there are some bugs, but works well for me 95% of the time.