Friends, the day our Football team steps onto the field for our first Power Conference game in 27 years I will think of every single U of H alums and fans that have left us. How many hours have we spent thinking about being part of Power Conference again?

Yes that is 27 years of anger, frustration, dreams and hope.

Think about our time in C-USA, BIGEast/AAC.

Think about how it compared to be left out for so many years.

We are finally there. We are back where we have always belonged.

We are all on Coogfans I hope with one common goal. We are here for U of H to succeed and get to the top. Our Basketball program is on the cusp of eternity. I have all the confidence in the world that our football program will get there too.

Our primary hindrance is not there any longer. This is our chance; this is the SLEEPING GIANT chance to show everyone how far we can go.

TCU reached the CFP final. Baylor won the National Championship. The sky is the limit friends. Let’s all get behind our teams. We have waited a generation for this day.

Let’s win a natty for the AAC first.

Technically, the Big East was an invite to a BCS Conference. It was just downgrade to G status before we played our first game.

I remember the excitement when the Big East invited us

Would’ve been neat if the Big East stayed together but it was too unwieldy.

Universal karma energy feels like it is back in alignment after a third of a lifetime in dissonance. Go Coogs. I’ll never stop getting a charge when our blue collar Coogs put a whipping on those that think they are so much better than us.

Our first season it was still a BCS conference.

Technically the downgrade occurred after the first season, but yeah. 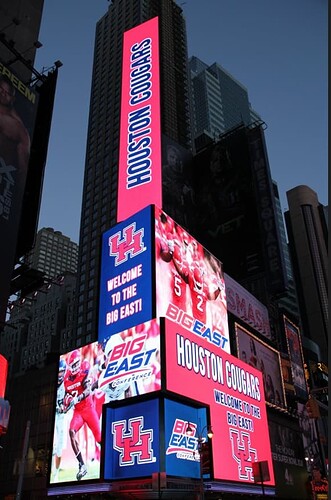 I honestly would have been happy if we’d ended up at a power-level eastern BE/AAC type conference with decent money and access.

I think our fanbase forgets that we thought "we made it to the Big Leagues " with that invite, which led to an immediate surge in recruits… that Herman won with by the time they were upperclassmen. Look how many of those Big East recruits made it to the NFL!

Also…remember, we’ve yet to play a single game in the Big 12. I’m cautiously optimistic but there does appear to be some drama regarding the schedule.

It’s the onions I swear!!! 28 years is too damn long. Glad to be back and rubbing elbows among the elite programs.

The money coming in will be day to night!!! That’s the part we all forgot at the end of the day.

I think this is good comparison when comparing being in a P5 school vs a G5 one recruiting wise and perception as a school.

Yes, really for the first time since we were independent do we have our future in our hands. Not having our main hindrance part of our conference is the very best outcome that we could have predicted.

I was happy with that big East invite and the name had brand. It then fell apart then I said ok, at least the name has brand and we can build the arseno sold us out selling the name which wasn’t worth it. The big East name was really good.

Wrong. The American was a part of the final season of the BCS system.

Yes, but the decision to not continue it as a Power Conference was made before we played our first game.

5 Legacy schools were there during our first year:
Rutgers
Louisville
Cincinnati
USF
UCONN

Why are you guys arguing if the AAC was a power conference?
It has been 27 years in exile.

That’s not the Big East.

West Virginia and Rutgers left after we came on. Louisville quietly gave their withdrawal notice prior to our invitation, betting some serious scratch that they would get an invite somewhere. That was why the conference briefly looked like it was going to have 13 teams. They’d replaced Louisville but we (the fans) didn’t know that Louisville had withdrawn.