Is it only mental illness?

On a side note:
During the game last Saturday, there was a pejorative launched at fellow coogfans for not being optimistic (or was it pessimistic) enough and it went “what a bunch of girls”.

how much patriarchy can we afford? Testosterone is a hell of a drug looks like. 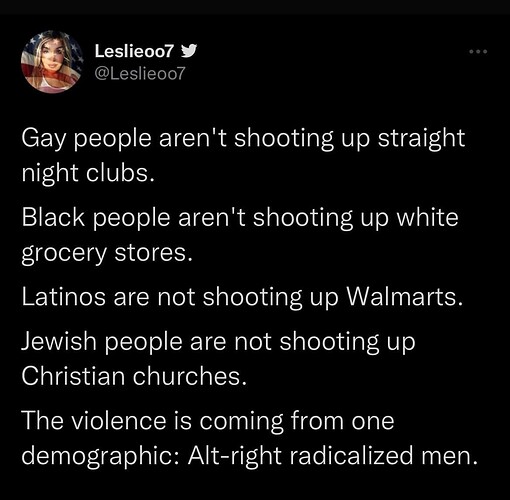 Right! Mental illness affects every demographic but it seems like massacres are pretty much narrowed down.

It is what it is.

Right! Mental illness affects every demographic but it seems like massacres are pretty much narrowed down.

Since Columbine, it has been mostly young white males.

Why? We need to ask that question.

This might be one of the most racist memes I’ve ever seen on Coogfans. WTH is a “white grocery store”? What is a “straight night club”?

Because these things aren’t remotely the same, stop being disingenuous.

The CS bar shooting was a targeted hate crime. The shooter was arrested but not charged for a bomb threat and confronting police in body armor last year. But he was still allowed to have guns, because when the prosecutors dropped the case, the file was sealed, as if the arrest never happened.

A grocery store in a mostly white neighborhood. They certainly exist.

There are gay night clubs. Anything that’s not considered a gay night club is going to be mostly straight, pretty much by default.

WTH is a “white grocery store”? What is a “straight night club”?

The most racist meme? Seriously?

I don’t vote in all the liberal judges. I’m not a Liberal or a Democrat. I just don’t want an authoritarian right-wing government, especially one pushing a Christian Nationalist agenda.

Why do you vote for Hungarian-style populism? That’s what the GOP is offering.

You are maga or a democrat.

You are maga or a marxist

It’s racist if that’s all you want there. But it just seems descriptive in this case. Adding the word predominately doesn’t seem to change anything to me. Just semantics and Twitter only allows so many characters.

Ever been to Aldi?