Armoni Brooks Honored by The American - University of Houston Athletics

Averaging a double-double in a pair of wins last week, junior guard Armoni Brooks was honored Monday as the American Athletic Conference Player of the Week. 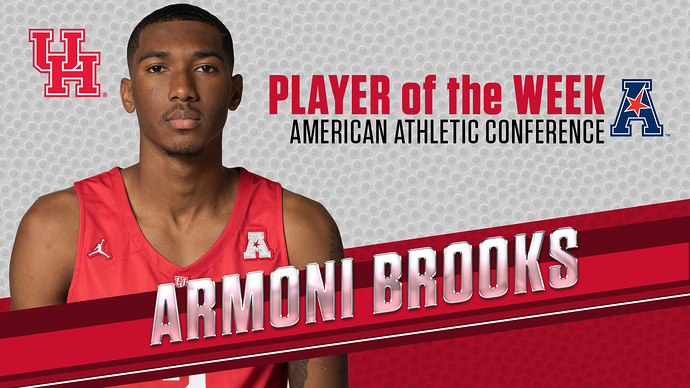 Brooks averaged 14.5 points and 10.5 rebounds per game to lead the Cougars to wins over UT Rio Grande Valley and over No. 18/21 Oregon in the Fertitta Center-opening game on Saturday night.
_ _
Usually one of the Cougars’ and the league’s elite shooters, Brooks struggled at times from the field but made his presence felt in other areas.
_ _
Brooks, who was named The American’s Sixth Man of the Year last season, grabbed a career-high 12 rebounds while playing all but one minute against the Vaqueros.
_ _
Facing No. 18/21 Oregon on Saturday, Brooks scored the first six points in Fertitta Center history with 3-pointers on back-to-back attempts and led the Cougars with 22 points and nine rebounds for his third 20-point game of the season. He also drained a pair of free throws with eight seconds left for the final margin of victory.