Im looking at the roster for the upcoming season and i think this has got to be the strongest top to bottom roster we have had since ive been following the team. Thry cann go a legitimate 13 deep on this team. I must admit a few years ago i wanted to kick Hughey off the bus, but he has made me eat crow. This team has a legitimate chance to be ranked this year. He has some pretty stout early season games, but those games help to get the team used to playing good teams. I think they have crept closer to USF and UCF and my orediction for them is a conference title or tournament title and Hugheys first time to the Big Dance. I know alot of UH fans could care less about women’s basketball but count me in as one that does. Go coogs.

We are long overdue to have a decent women’s hoops team. If it was men’s basketball we would have changed coaches a few years ago.
That said I hope this year gets us to the dance 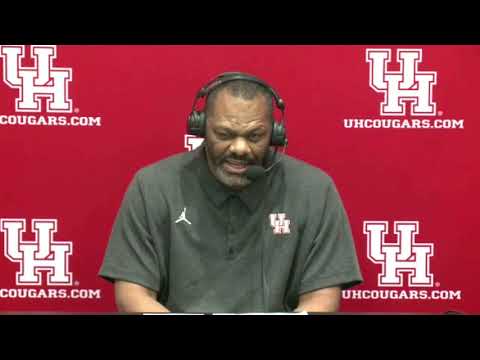 Coach Ronald Hughey comments on the Coogs’ being picked third in the AAC Preseason Coaches Poll and which of his players are players to watch this season.

.@UHCougarWBB's Julia Blackshell-Fair (@jujubefair23)'s comments on the Laila Blair's (@CodeRedd14) skillset: "She's making me better as a defender. Honestly, at this point, I think if I can guard her I can guard anyone in the league." #ncaaW #ncaaWBB https://t.co/PmgQAsJLcq
1 Like
HRReview (KG) October 14, 2021, 12:50am #5

.@UHCougarWBB's Julia Blackshell-Fair (@jujubefair23)'s comments on the team's goal to get to the #NCAAW Tournament: "This year, we're just focusin' staying together as a team; orking on the little things. Just getting there honestly. Getting there and winning." https://t.co/AZiF1dMfKK
1 Like