Although in college basketball, everyone has a chance at a national championship, the media still calls us and other teams mid-major so I doubt the media will stop saying Group of Five.

I’ll take that back. I have not really heard them call us mid-major in a while. 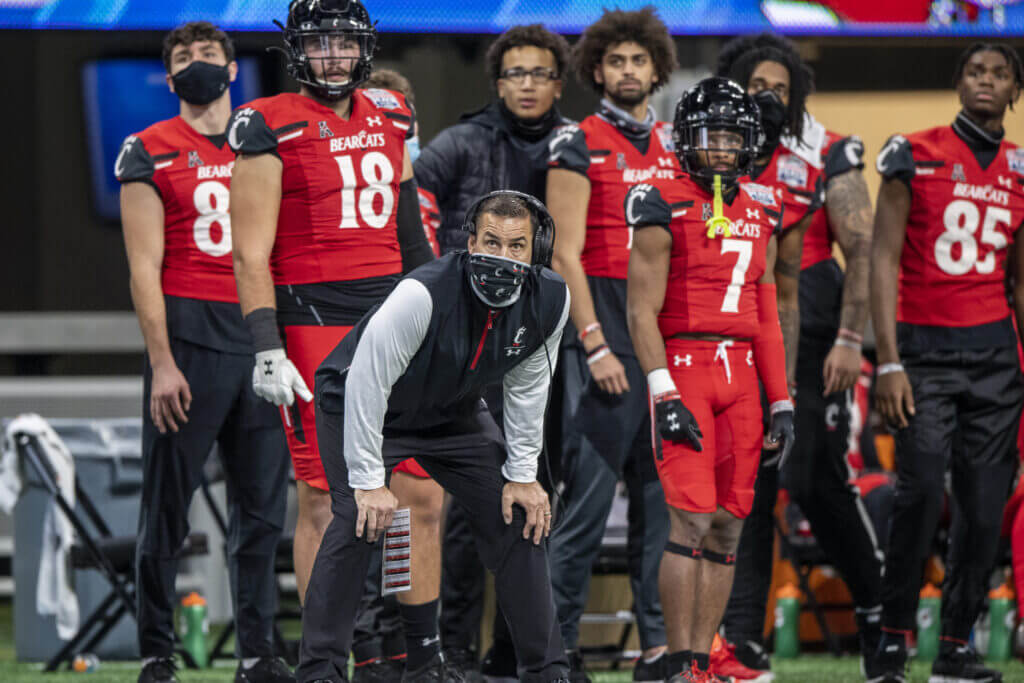 Could College Football Playoff expansion to 12 teams eliminate the 'Group of...

A 12-team Playoff would create access for teams from all conferences and potentially diminish the "Group of 5" label commissioners despise.

The value of G5 access trickles down to other parts of programs. Multiple G5 coaches and athletic directors said Playoff access would help in recruiting. Even low Power 5 schools with no chance at the Playoff sell recruits on their conference and what kind of spotlight that means. They portray the Group of 5 label as a step down. If there is a path to an expanded Playoff, not only would that pitch go away, but the top G5 schools would have a better chance at making the Playoff. Suddenly, they’d be the ones with the better pitch for success on the field.

Houston athletic director Chris Pezman played football at UH back in the days of the Southwest Conference, before the BCS or Power 5 labels existed. He’s seen UH’s perception change as its conference changed. He knows this expanded Playoff could swing momentum back in the other direction for certain G5 schools.

“It absolutely helps,” he says. “It’s part of the overall package you talk to kids about and it removes another barrier. They say, ‘You’ll never play for a championship in that league because they can’t get into the Playoff.’ It removes that argument.”

It also opens an intriguing scenario for coaches, where the top G5 jobs would become even better jobs. Luke Fickell’s salary is $3.4 million, more than many P5 jobs, and Cincinnati is and should continue to be one of the top G5 teams. In a 12-team format, why leave for another job that isn’t among the top few? Cincinnati’s path to the Playoff would be easier than places like Tennessee, Minnesota, Kansas State or other middle-tier P5 jobs, and the pay might not be much different.

The Athletic’s Max Olson ran the 12-team Playoff setup through the past decade. In those hypothetical scenarios, UCF and Boise State would have made the Playoff three times each. That’s more than Auburn or Michigan.

Dana Holgorsen left West Virginia for Houston in 2019, as many felt he’d maxed out what he could accomplish in Morgantown, and Houston could pay a similar salary, currently $3.8 million. At West Virginia, his best teams barely cracked the top 20, and getting past a perennial power like Oklahoma just wasn’t going to happen. At Houston, a 12-team Playoff path could have fewer major hurdles. More moves like Holgorsen’s could happen more often if the money is right.

The top handful of G5 jobs are much better than 75% of the P5 jobs.

What this does is forces the 75% of P5 schools to start playing us. They will definitely start losing recruits to us if we get it back together.

That article and the assumption are completely behind the curve. The term g5 is the rationalization for the segregation of both groups.

The Gambinos are not going to share their wealth voluntarily. You can call yourself the “Intergalactic Alliance of Excellence” and it won’t mean squat.

This is one thing I think could tank the plan. Mid to lower tier “P5” teams would lose their recruiting advantage against “G5” (always use quotes for artificial media created term) teams like UH, UCF, Cincy, Memphis etc. My gawd, could you imagine if Tennessee loses recruits to Memphis because the Tigers have a better shot at the playoffs?

I don’t know if these teams have enough clout to stop this plan, but I bet they are airing their recruiting concerns behind closed doors.

The label of G5 depends on ESPN not the playoff structure.

ESPN created the P5 & G5 labels to advance their agenda and drive revenue.

So regardless of Autonomy Structure, Conference Revenue or Playoff Access - the term G5 will not go away until ESPN stops using it.

JDCougar has it right. The term “P5” was created and promoted by ESPN. - To help ESPN.

Until the AAC gets paid like a P5 conference it won’t “officially” be one. College football is an arms race.

First I think we need to become part of the Autonomy 5 which is what Aresco and the AAC board has been pushing for, then we need to win a couple of championships or at least be in the game. After that, I think the money will come.

AAC asked for meeting with Power 5 to discuss inclusion

"Relegated to G5 status...the American has never belonged in that group."


The P5s do respect the AAC on the field but they like using the term G5 for recruiting purposes as a negative towards us.
5 Likes
wewantyoursoul June 24, 2021, 8:35pm #10

When the “legal” athlete payments start rolling, there’s no way any G5 school can compete with even the lowest level P5 program. That’s exactly how G5 gets knocked back down.

Until TV money starts evening out across the board, we’ll always be a huge disadvantage.

My gawd, could you imagine if Tennessee loses recruits to Memphis because the Tigers have a better shot at the playoffs?

Do recruits believe that Tennessee has a better shot of making the playoffs right now? With 4 teams in, Tennessee would have to probably go no worse than 2-1 against Georgia, Florida, and Alabama, and 2022 recruits were in 7th grade last time the Vols beat even one of those.

Tenn will prob never make the playoffs. We actually have a better shot than them. Sec teams that have a shot are bama, LSU, a$m, aurburn, fla and ga. The rest , it will be worse than being us in the aac.

When the “legal” athlete payments start rolling, there’s no way any G5 school can compete with even the lowest level P5 program.

So you think the lowest level P5s are not doing under the tables deals now? I think whatever the P5s have been doing under the table, it will be public now. I think the AAC top teams will be able to compete in the NIL era because we are in large cities with lots of businesses to give athletes an opportunity to get deals.

Not sure, Ron. Honestly, I haven’t really thought too in-depthly…just threw out a quick first thought. But you do bring up a really good point. If the local community has an opportunity to invest in these athletes, there’s no way the smaller P5 city businesses could outbid large corporations located in Houston. It will be interesting to see how the dynamics of this new “feature” evolve.

It all depends on if Joe Booster, owner of Booster’s Auto repair, is allowed by the NCAA to pay Jimmy Linebacker $80,000 to appear on a poster holding a lugnut.

Well we will soon find out. The Texas NIL law goes into effect July 1st so UH student athletes can start making money on that date. I hope UH is ready.

The money that flows to the athletes will not come from the university. It is going to come from endorsements.

Being situated in Houston will help us because of the media market. So we will be able to compete just fine.

I would think, along with having academic advisors, we should start providing these kids media advisors and media training.

I am going to say that the expanded playoffs and the NIL is the best thing to happen to UH since being asked to join the SWC. It just blew up the glass ceiling that we were living under.

Thank you for posting.
The cartel created the G5’s even before the cfp started. I mentioned the undefeated Utah. Yes they did play in a bcs bowl game but they did not play in the “final” game. The G5’s moniker became official when the…G5 commissioners signed on the gambino paperwork. aresco and the G5’s commissioners should have never signed this “sell your life away” deal. This is why we are where we are.
A lot of you are jumping up and down that we are a shoe in the cfp. Read the entire “pre-script manifesto” There is nothing in it that guarantees that the aac is an automatic “shoe in” into the cfp. The cartel and the cartel only will decide which G5 is in. Do you think for a minute that the five P5’s won’t be automatically the highest ranked conferences?
You do not think that way?
Why was the bcs and cfp created then?
The cartel does not and will never respect the G5’s for one reason. They fully include the G5’s? They make less money. This has always been about money. It has never been about sport or merits.

It wasn’t ESPN. There was a article stating that a G5 commissioner representing the non contract bowl conferences originated the “Group of Five” tag during early CFP format negotiations in 2012 -2013. The Big East was included in that group since it was losing its AQ status in the new CFP format. Can’t find the article now but will post the link here if I find it.

ESPN embraced it, thought it was good for their bottom line. The AAC as a non autonomous conference is stuck in that group, and will always be referred to as the best G5 even if it consistently secures that sixth slot.