Does the UH basketball team use Data Analytics?

It’s obvious Tillman Fertitta has a huge influence on the University of Houston and their athletics program.

Seeing as he’s the owner of the Houston Rockets, one of the NBA’s most Analytical Data Driven Teams, do you think he has influenced UH Scouts or hired data analysts for the program to show them what the numbers are saying?

Does UH even use data analytics?

Obviously if you’ve ever seen Moneyball, Data Analytics can be used to get undervalued talent and change your philosophy on how a team is run and constructed.

Shoot lots of 3’s, if you make 33% of them, it’s equal to 50% from 2. Only take open layups and dunks, or efficient close to the basket shots. Do not shoot lots of mid range shots, as they are inneficient.

I think it’s no secret that UH has one of the most efficient offenses. They are constantly shooting open 3’s, dunks, layups.

If you think back to the Harden years of the Rockets, we are running a similar system as them when they were contending for championships and battling the Warriors all those years.

So… just wondering if you all thought (or have Insider knowledge) on if UH uses data analytics for their basketball team and if Tillman is a big proponent of that?

I’m fully in support of the data movement. As it’s less multiple franchises to numerous championships and titles all across sports from baseball, basketball, football, to the premier league overseas.

I think with a great coach in Sampson, the program he’s building here, and the use of data driven analytics, we will be competing for national titles for years to come. Just wondering we were already doing that!

Sampson was part of that rockets team for three years so…

Exactly. All signs point to yes… but I haven’t been able to find anything concrete.

The answer is yes and not allowed to say which analytical tools.

Honestly all I needed to know. I knew it.

I’d say yes, as well. Although I’ve heard CKS say how it’s important to also follow your gut feeling & eye test in some recent interviews. As someone currently transitioning to Data Analytics & Visualization, I’m often trying to see how we’re using these tools to our advantage sports & media-wise.

Every D1 program uses Synergy to some extent, not sure how influential it is at UH. I love it.

It’s funny because he tells all the guys don’t worry about how many points you score. You’ll score.

Every once in a while in one of interviews or other videos Coach Sampson gives a glimpse into all the charting, metrics and analytics he and his staff use. This stuff is deep high level analysis. For instance, I heard him allude to grading pick and roll defense, broken down by area of the court in which the pick is set, then whether the dribbler goes right or left. There is also a video in Coach is extolling an artificial shooting machine (I think, I bet someone else would remember better than myself). If you can find that, Coach goes into some detail on charting where shooters like as their preferred spots and then doing the trigonometry to calculate rebound angles. I may be exaggerating, but I feel comfortable in saying I took from his presentation a sense of what, to me, is very sophisticated analytics. Remember, Sampson studied with Pop, as bright a mind regarding basketball as you will find.

He has talked about how much he learned working with Popvich and all he had to do to prepare for Morey when with the Rockets.

This can maybe be brought to Football. Get the CS Department involved!

CDH is BIG on analytics. He also brings them up often during interviews. I remember last season in particular, he’d often cite Tune’s completion & accuracy percentage in games where Tune was making poor, game-changing decisions & not taking care of the ball. As an arm-chair fan, I didn’t wanna hear percentages when we were losing games…now in CDH era year 3, it seems to have paid off with the same QB.

Also if we worked on AI to make it generate plays

I have heard Coach Sampson refer to the fact that they track tipped balls (leads to rebounding) multiple times.

I will share a glimpse of one small part of one software used. All these are linked to video clips along with the statistics. I’m sure they do much more with this data in other programs and have some of the other options as well. What I like about Sampson is he seems like a coach that will use the analytics but also doesn’t do too much to make players feel like robots. You don’t want a player coming off a screen and having in the back of his head he is low efficiency with this open shot he is about to take. The Rockets to me pushed it too hard (while also allowing their star players to ignore it).

Anybody want to guess which player this is?? And don’t worry, Tulsa surely already has this info. lol 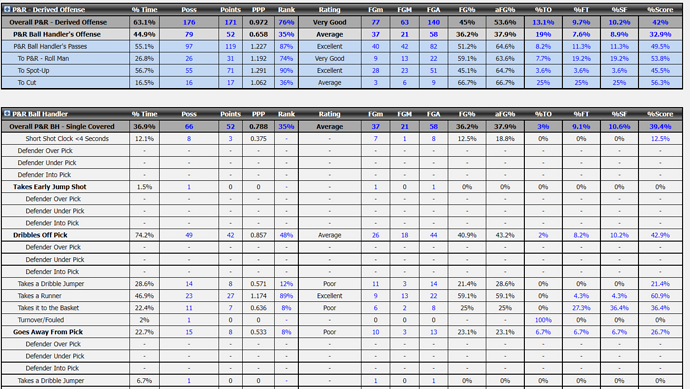 That’s Jamal. You think they have that info? Or are we giving it to them for free…

Thanks - that is great stuff. I confess it is like catnip to me - I find this kind of data truly fascinating. If I ever had the time, the recording and game specific data, I would enjoy seeing these kind of charts and then trying to figure out from what I saw how the percentages were derived. I really appreciate you sharing this.
However, like you note, Coach Sampson seems to have mastered the art of making sure this a tool to be used properly, and not have the tool be an end in and of itself. For all the charting and metrics and analytics, I get the impression Coach focuses on a number of intangibles.

If they don’t, they can contact me and pay my consulting fee to get it! lol

all teams use data analytics… so do we, we heavily use kenpom… sampson often references it when talking about the team and opponents

we dont use it the way you are referencing tho… we use data analytics as a scouting tool not as a way to model our team… we build our team on our players strengths not what is the analytically smart way to play… that a big reason our offense changes every year (it changes with the player, its not a system)

it is also evident in how we encourage “bad analytic” style of offense …caleb mills style of offense is one of the worst styles of offense to have based on analytics, he worked almost exclusively in the mid range, loved off balance contested 15footers. our staff encouraged it because he was extremely good at that even though it is considered bad offense… we didnt trying to force him into layups and 3s

kellen directly spoke to this in the offseason in regards to mark… he said mark was also elite in the midrange, and directly noted how they are going to encourage him to shot a ton of them, even though it is frowned upon by advanced analytics… but stating mark could lead us in scoring doing so