I remember being at one of Dimel’s when it was just Wiz and me.

…and is there any doubt why most of are worried about another year of CDH and why it has to be avoided?

Our program is at rock bottom…3 reporters for a soon to be P5 program???

What was said at the presser?

This has everything to do with the World Series, nothing could compete with that right now

You can see it on YouTube . Discussed temples pass rush and also their OL doesn’t give up sacks . Talked about injuries some, younger inexperienced guys being thrown into the fray . Some times they flash and then sometimes they get exposed. Thought we fought the whole game but once we weren’t able to stop them some might have began pressing or losing confidence thus creating more errors . We are going to need to run the ball well but not sure about Campbell and Henry’s availability. Says Sneed is busting his tail but he can’t shoulder 50+ plays a game . Good interview considering

Watch it all here: 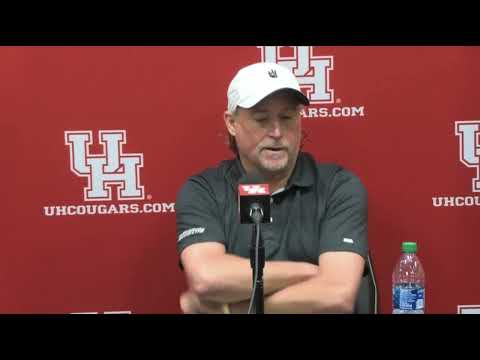 Yeah lol. They won one game and now they are “hot”. I was at the game in Philly last year where we trounced them. We don’t win at home and it is a firable loss type game

Nobody gives a damn about UH football anymore and there are three men to blame for that. Chris Pezman, Tilman Fertitta and Dana Holgerson.

The buzz will be back next summer and fall.

Guess attendance. I’ve already said 4,000 but I think that may be high.

Buzz won’t be back if it’s the same coaching staff……the stadium will be full of whoever the opponent is to watch their team embarrassment us.

Astros Parade. Coogs home opener. No one is worried about a football press conference.

Just Joseph trying to get his “look at me” in. For doing his damn job.

I know Big Rob was there. Funny. I don’t see him going to Twitter to pat himself on the back. Maybe he should.

But, since we’re not. There are other priorities.

That’s sad news if you think you might be high Funk. Us holy rollers will pray for ya lol.
See you great people at the game Saturday!