@PAWRFUL posts and news appears. Still not much is leaking at this point as the Big12 meeting draws near. Dodd’s article really wasn’t news and he really doesn’t say anything even though Flugaur tries to make it out to be the end of the Big 12

Big 12 expansion losing momentum: No grant of rights extension, ranking candidates
The twists and turns of the Big 12 could come to a head at a mid-October meeting of league presidents
Dennis Dodd

Multiple sources through the expansion process have mentioned that, for Texas and Oklahoma alone, it is difficult to find support to extend the grant of rights past its expiration in 2025.

None of it necessarily mean the league is on life support. There continues to be a worth to advertisers of having a major conference in the middle of the country. In addition, Texas and Oklahoma may eventually decide their best chance of winning championships continue to be in the Big 12.

Now let’s take a look at those Big 12 expansion prospects:
1. Houston: As one observer put it, “How does the Big 12 not invite Houston now?” Money, facilities and a hot coach on a playoff run make it almost impossible if the league expands.

OCT 4, 2016 - The disappointing 2-2 starts by OU and Texas have steered views from the sorry state of the Big 12, but make no mistake, the annual collage of crimson and burnt orange will be staged against a backdrop of conference uncertainty.

The Big 12 at 10 schools is inferior to its peer conferences in market size, academic standing and football passion. The conference footprint doesn’t have enough cable homes to make ESPN or FOX interested in a Big 12 networking during these turbulent times. Forty percent of the Big 12 has stadiums that seat less than 51,000. The league’s on-field performance seems to get worse by the year in head-to-head competition with opponents that count.

Why Charlie Strong will probably lose his job at Texas; how Bob Bowlsby’s could soon be in peril 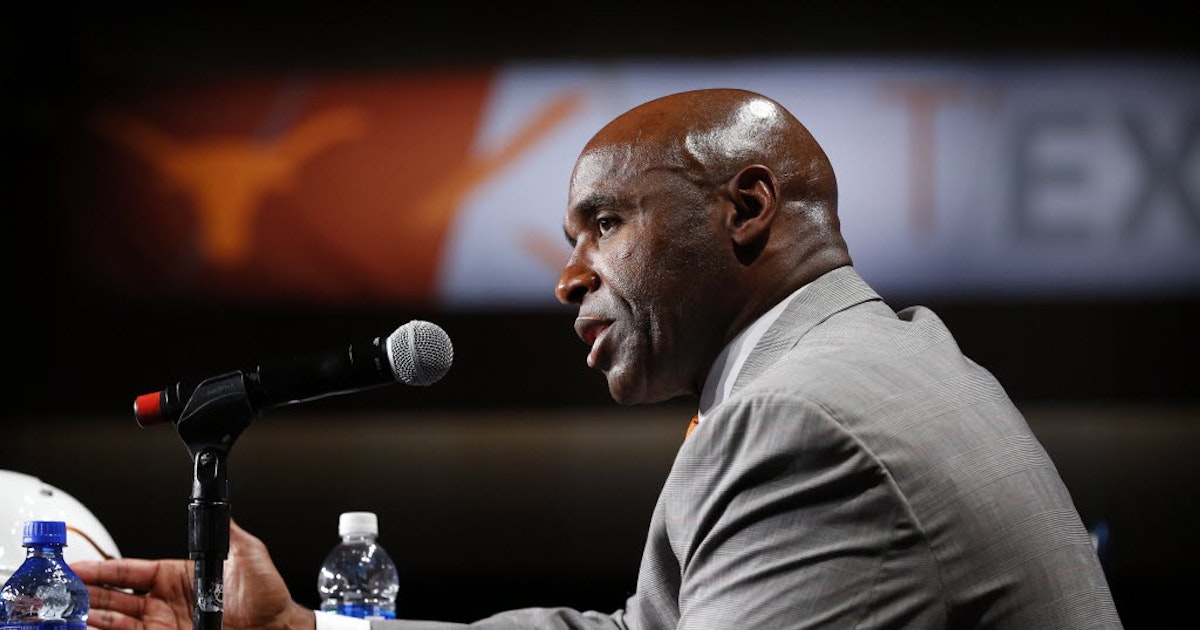 Why Charlie Strong will probably lose his job at Texas; how Bob Bowlsby's could...

My man Bob Bowlsby does not look good right now. It looks like this conference is just sitting around waiting for Boren to say whatever. He’s the Alan Greenspan of this conference. If Bob doesn’t take control of this situation soon, I fear his job will be in peril. It’s an embarrassing thing for the conference. There seems to be no unity. And a lot of it comes down to UT and OU not being on the same page. What’s new?

“Jason Buck says right now, let’s fill the stadium,” he says, quoting, well, Jason Buck. “Expand it to 80,000 and sell out — and go back to the Mountain West and go to the Fiesta Bowl, and they can’t ignore you any more; the clamor is too high.”

The ? is not if FOX/ESPN have direct incentive to dismember B12 The reality is both have incentive to make certain assets happier in future

m.newsok.com/tramel-blame-o… All of this is quite obvious. The Horse n Buggy Conference with the RC COLA marketing plan. B12 Death Rattle

This one is in response to a question regarding Monty’s superconference of BYU/Texas schools to the Pac 12:

Actually had a conversation about this today and I don't believe it is. twitter.com/iraisemyflag/s…

Monty also did a periscope session one what he knows:

Everything I know about #BIGXII Expansion

Says its BYU, Houston, Texas Tech, TCU, and UT as the Plan B. No Baylor.

TCU is needed to breakup the conference … UT TT and TCU 3 to do the ugly deed … otherwise the froggies are irrelevant.

TCU brings in the Dallas Ft. Worth area and UH the more fertile SE region and UT central Texas … TT brings in no one but jackrabbits cactuses sand and scorpions (the two Az already have that in abundance) and is fortunate to be included.

BYU brings in no one since Utah is already in the area.

Could see that. Monty is very pro-BYU and may be trying to force BYU into that group. Hasn’t really made sense from the start.

This thing is still in negotiation mode. I still think it will be two and UH and Cincy are in.

This part is really interesting to think about. I don’t know that I can see the 5 TX schools + BYU joining another conference. Politically and logistically I’m guessing that would take forever, and if this scenario has wings, these schools are looking to make it happen now if the Big 12 doesn’t expand. Would make more sense if they start a new conference, but where would they get 6 other schools? I wish there was a way to kick out the 6 worst AAC teams and replace them with this group. Basically, the legitimate expansion candidates plus this new group. I don’t know. Feel like I’m grasping at straws at this point.

TT brings in no one but jackrabbits cactuses sand and scorpions (the two Az already have that in abundance) and is fortunate to be included.

For PAC 12 expansion to work, they have to go to 16…jackrabbits or not, TT likely a part of this picture along with Texas, Houston and TCU…This also flows alongside the OU and Kansas to BIG that Flugar is putting out there…

Tech and TCU together deliver a pretty good bite of the DFW market, and they’re well-connected in the state, so as long as UT doesn’t decide to fly solo, they’re in good shape.

A mystery for now … ole Monty believes the Pac12 has had a change of heart since many of their members are scheduling BYU in future games HOWEVER it could also mean they are invited to an occasional dinner BUT not allowed to stay permanently.

As for the froggies they don’t have an honor code against gays or Romulans or Klingons but they do have the FtWorth/Dallas region TV market and decent recruits region plus Jerry’s Palace in the neighborhood.and if the horns want them to tag along then the Pac12 may or may not relent. I suspect this will be vetted long before any decision to implode the Big12 is made.

A random thought I just had about the proposed mega conferences:

Assuming we are invited into one of these, I wonder if they would go with the smaller pods, and what it would look like.

I like the idea of the CFB season being like pool play, with some other games mixed in.

Pod with 5 schools. The best record advances to the CFP. Exept the CFP is technically a 16 team tournament. Winners of each pods in the 1st round, then CCG, then semifinals, then championship.

It makes to much sense.

The HUGE problem is, who is getting left out. What should decide how many “major” CFB teams exist?

I love the fact that KSU and ISU have to sweat about this. Just because they are currently in a P5 doesn’t mean they should continue to be. Problem is schools like WF, WSU, and other programs like that will be spared.

Montemayor is now claiming that Texas wishes to create a new Big 12 with a different name after allowing OU to leave to BIG…this is because they will have enormous influence in the new league, which no doubt would be true. I presume Kansas goes with OU, though Monty doesnt say so…(Flugar does ) and when this happens, Houston, BYU, Cincy and …wait for it…NEBRASKA join the new league…Monty says Nebraska has explored possibility of returning to their old league for over a year, because their brand has basically disappeared as a BIG 10 member…Hey, anything is possible…
Lets rename it the Southwest conference, Horns…