Big 12 schools already have Houston, they don’t need the Cougars, too
Mike DeCourcy 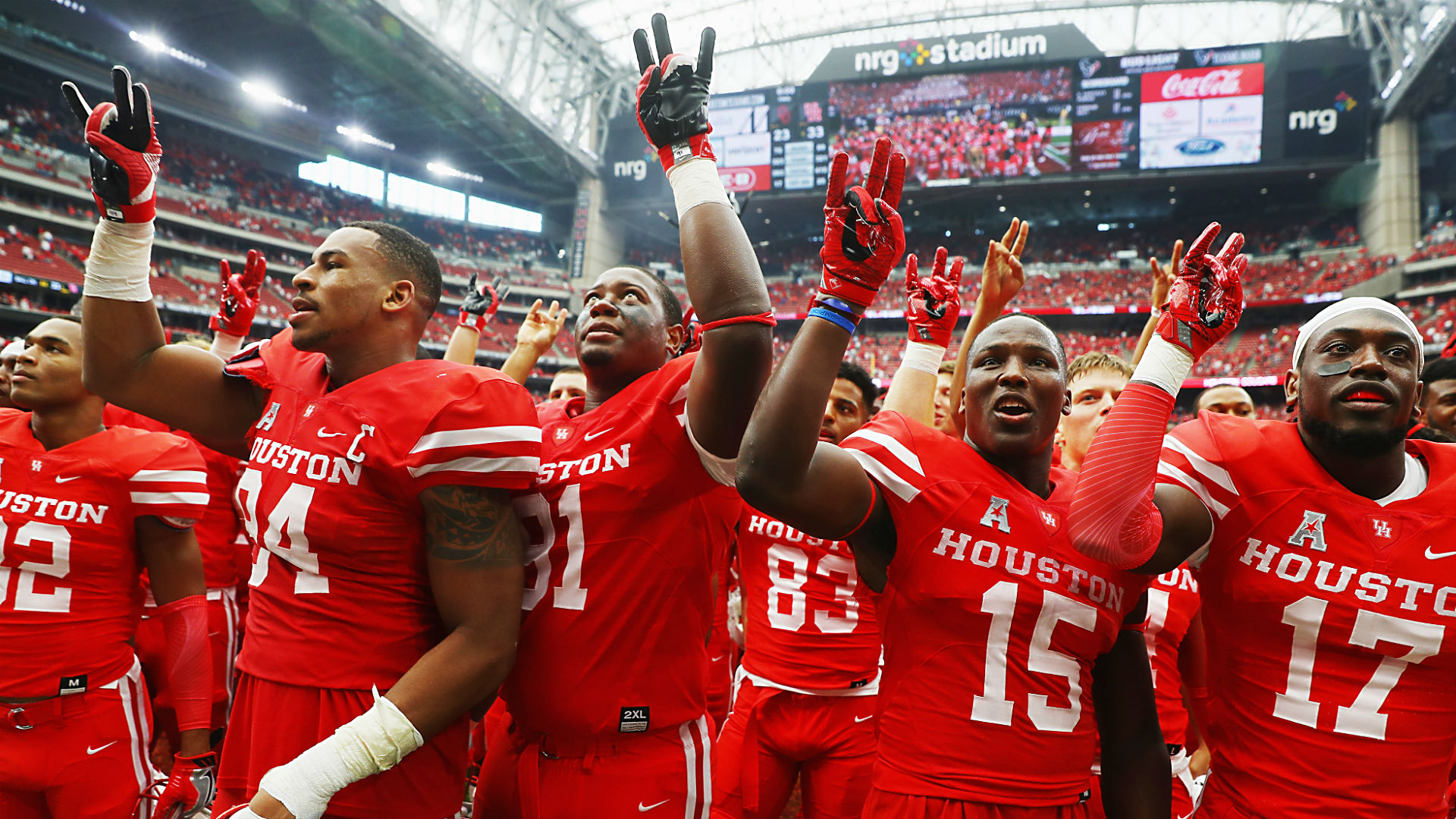 Big 12 schools already have Houston, they don't need the Cougars, too

The Big 12 has already has the Houston market. What incentive does it have to take the Cougars and its rising football program?

Regardless of Houston’s current success in football, though, many league members have no apparent motivation to make UH one of them. Any Big 12 aspirant will need votes from eight of the 10 current members to be asked to join. Voting for Houston might be in the best interests of only one (Texas), inconsequential to one (West Virginia) and counterproductive for pretty much everyone else. 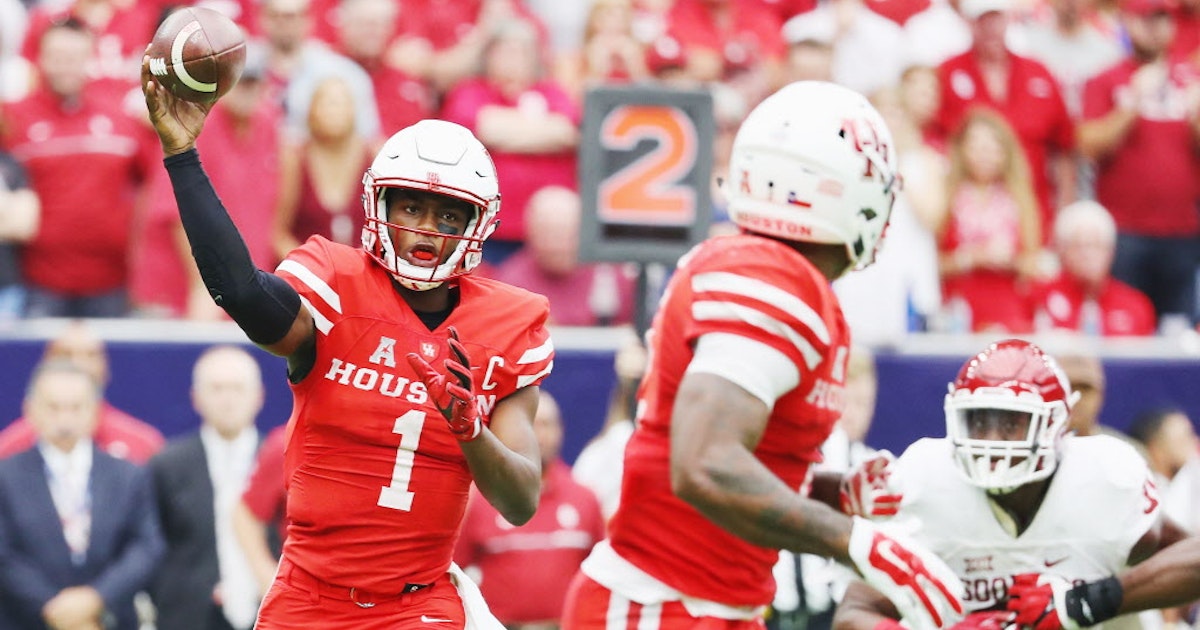 Are there any schools that can knock off front runners Houston, Cincinnati in...

Chuck Carlton recently held a chat to talk all thing Big 12 expansion and college football. Here are some highlights:Question: As far as Big 12...

Question: As far as Big 12 expansion favorites, is there a real threat to the Houston-Cincinnati duo? Sure sounds like those are the two to beat.

Carlton: If the Big 12 expands, those two look like the front runners at the moment. LGBT and Title IX concerns have hurt BYU’s expansion efforts. Memphis is already out. UConn has struggled in football in recent years. You have the Florida schools and Colorado State and SMU and Air Force and … maybe a push by ESPN could lift BYU, which could change the equation. 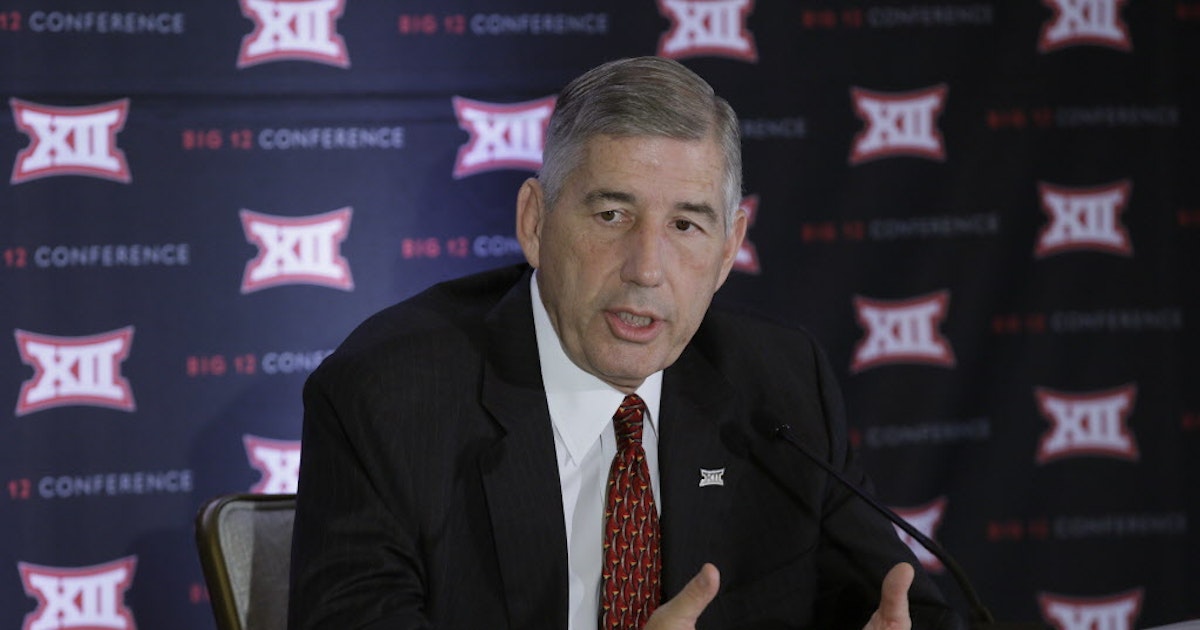 When the Big 12 should announce expansion picks; if conference doesn't add...

Chuck Carlton recently held a chat to talk all thing Big 12 expansion and college football. Here are some highlights:Question: Aren't we coming up...

Question: So what happens if the Big 12 doesn’t end up expanding this year? Could it be a possibility for the next football offseason as well?

Carlton: If the Big 12 decides not to expand after two years of research, discussion, consultants and interviews, it would be a PR mess and signal that the school presidents really can’t come together on anything. I’m sure the Big 12 would then kick expansion down the road. But what difference would another year make at this point? 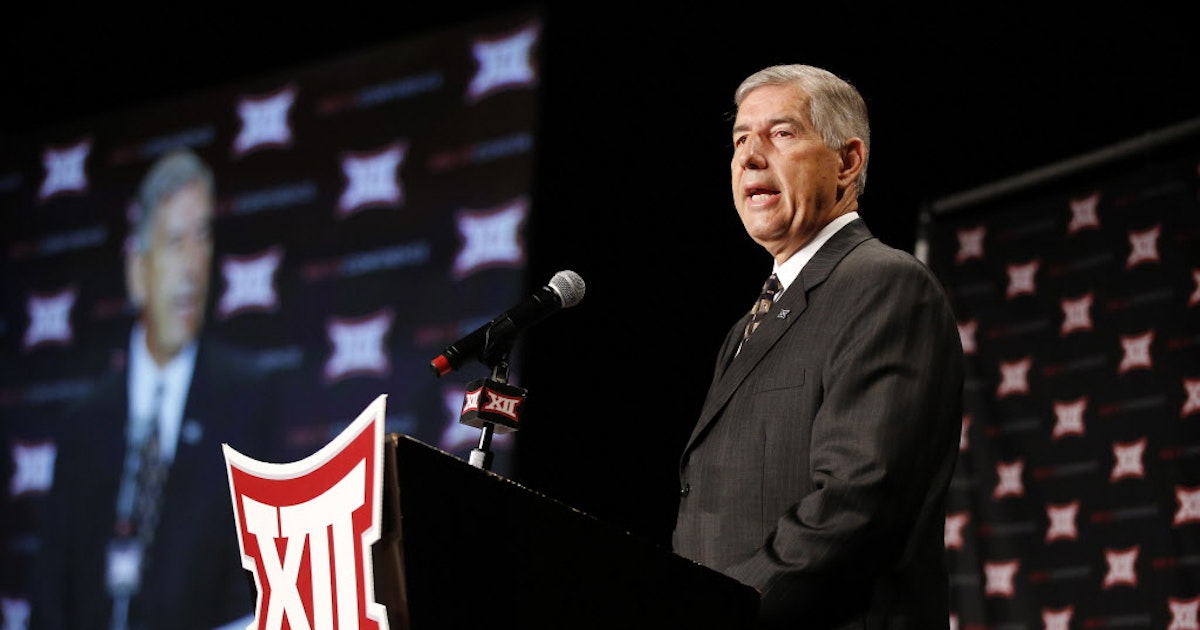 Beyond these two Big 12 expansion candidates, it's kind of a crapshoot of which...

Columnist Tim Cowlishaw recently held a chat to talk all things D-FW sports. Here are some highlights:Question: Which team from All-Big 12...

Question: Which team from All-Big 12 Expansion Candidate Bowl – Houston or Cincinnati – gets in in expansion?

Cowlishaw: I think Houston is in for sure. I think if they add two teams, Cincinnati is the most likely second candidate. If they go to four, both will be in but I don’t think it goes to Memphis any more. I liked Central Florida, a huge student body whose team has fallen off since it beat Baylor in the Fiesta Bowl. I like getting into the Florida market. But I’m not sure there’s much support for that. So really beyond Houston and Cincinnati, it’s kind of a crapshoot. Athletics Director John Currie talks to the Collegian about football and the Big 12 expansion.

Texas Tech has added a home game against Lamar to the 2018 football schedule and moved a game against Missouri State, clearing the way for th

The current consideration for Big 12 expansion candidates and future makeup of the league puts Tech in a holding pattern for now.

“The other piece to this is conference expansion,” Hocutt said, “so I don’t plan in the coming months to do much more with this until some of those questions are answered.”

BEYOND BUCKEYE LINES: MIDNIGHT YELLING WITH THE 12TH MAN
http://thebuckeyebattlecry.com/college-football/ohio-state-football/beyond-buckeye-lines.html

As many of you know, I am a big supporter of the University of Houston joining the Big 12. I asked Davis about that and what his thoughts were. He, like myself, is a big supporter of it also. He knows that UH getting in will help keep the Houston talent home, and actually make the Coogs tougher, since kids won’t have to leave home to play big time college football. Davis even mentioned to me that had UH been in a Power 5 when he was in high school, he would have looked at them harder than he did, since he wanted to stay close to home and enable his family to be a part of his student-athlete career.

Big-time college football recruiting in Ohio: Did Cincinnati prove it can change things for Ohio State?

Big-time college football recruiting in Ohio: Did Cincinnati prove it can change...

Ohio State is the undisputed King of Ohio. But for the first time in forever, the Buckeyes could have some in-state competition.

“They still have a chance right now as they are,” Hawkins said, “but if they got to the Big 12 and had the chance to pull big-named guys out of Ohio consistently that normally Ohio State or teams like that would pull, then obviously that would make them even more attractive than they are to me already.”

Football program hangs in the balance of conference change
http://www.thesunflower.com/opinion/article_eee4dcd4-7b67-11e6-aeea-9778937c9f36.html

Bardo has touched on the fact that joining the Football Bowl Subdivsion (FBS), the highest division of college football will be difficult, and conference realignment could help. He has also talked about his willingness to start off in the Football Champion Subdivision (FCS) in football and remain in the MVC as it could be beneficial to the program.

Thank you for all these links, pray10!

BTM: OU Contacts "No changes. There is no credible movement toward consensus of any two candidates among Big 12 candidates for expansion"

BTM:OU Contacts ""Oklahoma people" perception in regards to Boren's statements yesterday has to do with frustration toward BYU's candidacy"

BTM:OU Contacts "We can't get consensus with 2, not close" "We can't get to 4 without BYU protecting Big12 Presidents with public statement"

BTM:OU Contacts "No public change in Honor Code has eroded support. Which has greatly eroded data argument for 14"

BTM:OU Contact "Boren is dissaponted. Not a happy man which makes negotiations toward compromise even more complicated"

BTM:OU Contacts "When Boren stated he wanted expansion that would help put butts into seats, this was about BYU = on the ground data"

BTM: OU Contact "Pro Expansion forces in Big 12 used data and its presentation to Big 12 Presidents as its pliers to pry open discussion"

BTM:OU Contact "Data was clear. BYU would strengthen Big 12 "on the ground". "Without BYU candidacy Boren can't use data. No more pliers"

BTM:OU Contacts "Only leverage left for pro expansion forces in Big 12 is data of 12 schools easier for berth in College Football playoffs"

BTM:OU Contacts "But that simple math is perceived as not enough to push toward 12. No consensus. Houston has little support outside Texas"

BTM:OU Contact "Houston needed 14. 14 needs BYU. Big 12 Presidents need protection and are not getting it from BYU." "Needs not being met"

BTM:OU Contacts "Which gets us back to UC & UConn having once again broadest support in Big 12.But combo doesn't have a University of Texas"

Me: My takeaway is the same as yours. Data driven expansion without the school data pointed to for said expansion does not work.

I do remember OU contacts telling us about the "on the ground data = BYU..and "over the air data = UConn.

I also remember OU Contacts telling us all BYU needed to publically change the Honor Code which "thread the needle" for all concerned.

Big 12 Presidents needed protection...needed to be able to direct incoming heat of BYU inclusion into Conference toward amended Honor Code

Montemayor expands on his BYU alternative

I have confirmed by multiple sources discussions of a super conference with Texas, Baylor, Texas Tech, TCU, Houston, and #BYU joining...

...another major conference. This scenario is only being discussed and I'm told has not moved to the point of action. #BIGXII

The situation with OU & Texas is at the point where most do not believe the #BigXii will survive if they do not expand which ha spurred ...

No problem, have fun doing them and glad I can pass them along.

So, it looks unlikely the B12 will expand, making them a huge joke of a conference.

And now we need to position ourselves for realignment when the GOR runs out? And maybe in between now and then we join the PAC or ACC?

Thank you very much Patrick. I keep writing it but I believe that none of these writers have a clue of what is going to happen. The small12 has done/is doing one thing right. Their decision is under wrap. That leads me to SPECULATE…I wrote speculate that they are contract negotiation(s) with both Disney and 21st Century Fox. It is, was and has been about media numbers. We have them. We are in Houston.That’s what will get us in.
The PAC12 is looking at Asia for expansion. Last time I checked there is a huge time difference even with the West Coast. This is ludicrous to think that they will glue themselves to watch the PAC12. We are a prime target for every single P5 conference including the PAC12. At this point I would not be surprised if the PAC12 invites us. Heck, we can all speculate right?

Don’t forget, the Houston Rockets are the most-watched NBA team in China. Might make it easier to get the Pac 12 in the door in China if another red Houston team is coming.

Someone call Yao and get him to sell UH to the PAC12. I want west cost road games! I loved going to the game at UCLA. Except for that final score

Anybody read Tim Montemayor’s tweets? Is that guy legit?

Some interesting stuff there.

Edit: I should clarify. not the above ones, the newer ones about Texas’ evil plans for a superconference without OU

What’s wrong with these:

Do you mean besides the poor grammar in using “is” instead of "are?

China is 13 hours ahead of us…just imagine having a 6AM kickoff for UH vs Cal in Beijing!

Actually, I am pretty sure that “is” is appropriate. When you speak of 2 things as an singular entity, as they would be as expainsion partners in his context, they become a singular pair.

If any of that is true (unlikely), Boren seems content on going down with the ship over practically nothing. If the TX schools to the PAC has legs, I hope he has his story straight to explain to IA. State, WVU, KSU, etc. why he chose to bankrupt their athletic programs.

One team was going to win and another lose. How would either of us played our way out of the B12?
If its not UH/BYU or UH/UC what other combo moves the needle outside of BYU/UC?
If it came down to BYU/UC, Houston would still be OK as another conference has seen/is seeing that a strong Houston brings eyeballs and access to Texas/Houston recruiting grounds.

One team was going to win and another lose. How would either of us played our way out of the B12?

Pete Thamel out with another B12 expansion piece:

It has gotten so sideways for the Big 12 that the key tenet driving expansion decisions could be what will yield the least embarrassing press conference. Could Boren get trotted out in front of the media and explain not taking Houston? Likely not. Especially a few weeks after the Cougars pounded the Sooners, sold out NRG Stadium and did a remarkable 12.8 television rating in Houston."

Aka, the original Pac-8