Still quiet as everyone kind of waits until mid-October:

Bohls: Could BYU, Houston both get left out of Big 12 expansion?
http://www.mystatesman.com/news/sports/bohls-could-byu-houston-both-get-left-out-of-big-1/nsb6h/

1. It seems clearer and clear that BYU isn’t getting into the Big 12. Just too many negatives for the conference, which knows all about negatives. Remember, it takes only three “no” votes to kill any expansion candidate, and BYU’s stance on its Honor Code, gays and lesbians, not playing on Sundays, the issues of it already having its own TV network and geographical distance from the Big 12 has definitely hurt the Cougars’ chances. Playing in a western time zone doesn’t help either, especially after Texas just arrived home at 7 a.m. Sunday from its road trip to even more distant Cal. … And who really knows if Houston is a viable candidate. I’ve heard nothing to dissuade me from thinking many in the Big 12 still oppose (i.e. are afraid of) Houston’s inclusion. I find that very small thinking. Houston deserves to get in.

Monson: How BYU can get into the Big 12 — and find some peace 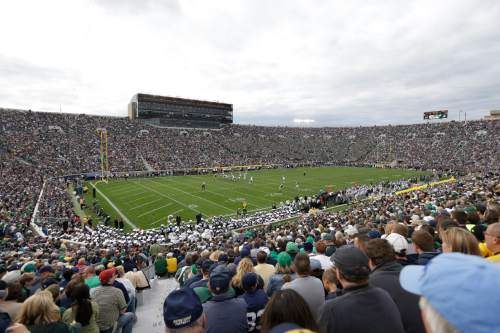 Monson: How BYU can get into the Big 12  and find some peace

Here’s the truth about what BYU can do to make itself more attractive to the presidents of the Big 12, increasing its chances for inclusion in the conference and making its position more acceptable. Not just acceptable to those outside its community, but those inside it, too:

Soften the language in its honor code. Leave some parts out and administer the remaining parts with a little more kindness and understanding.

It wouldn’t be that difficult, and it would relieve problems moving forward, at least some of the problems that will only intensify over time. 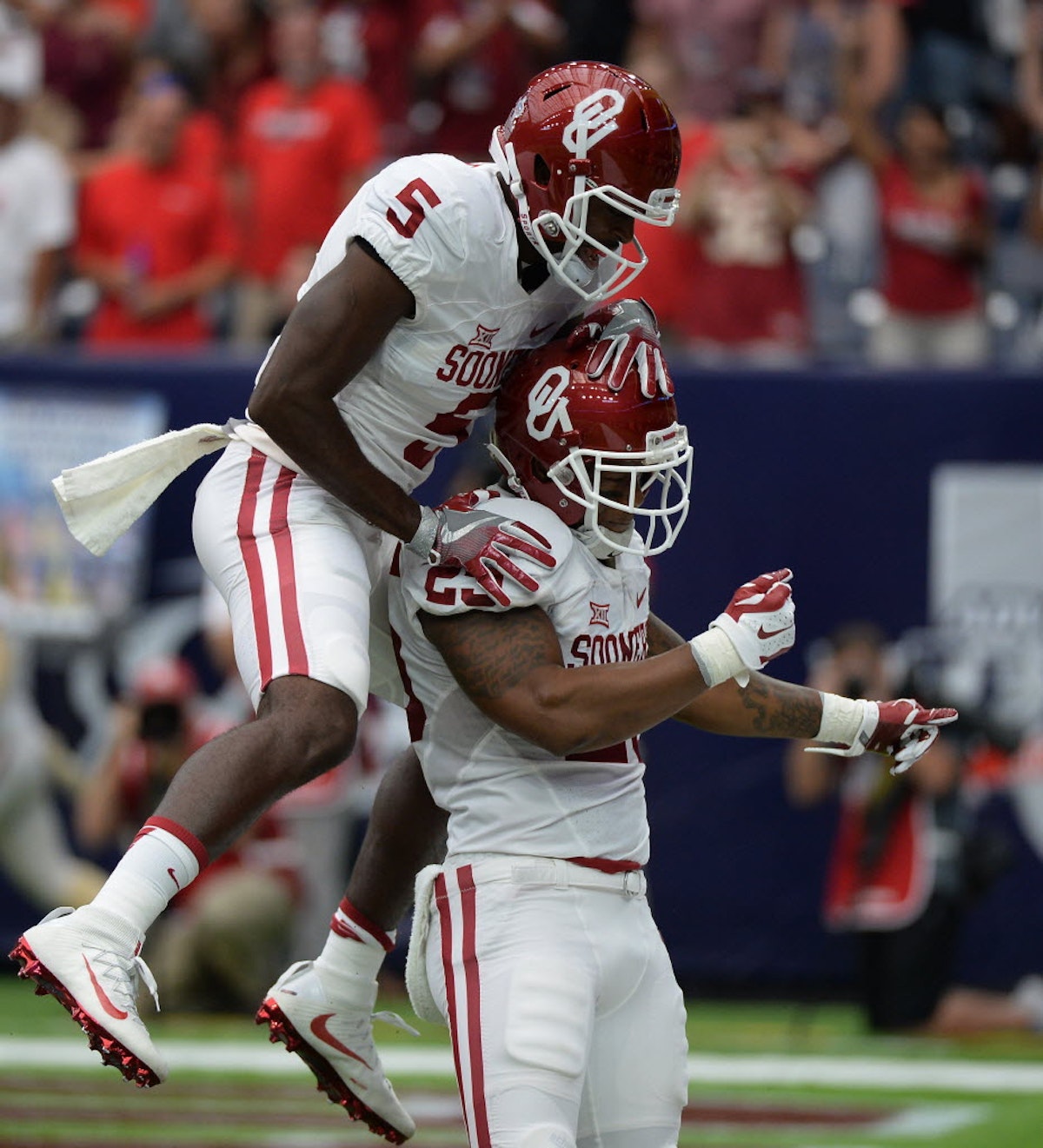 Texas lieutenant governor Dan Patrick took his chance to take a shot at No. 24 Oklahoma when asked about Big 12 expansion, according to Fox's Mark...

“We’ll see how Oklahoma votes,” Patrick said. “I mean after the trashing they took from the University of Houston, could they really vote no? I can’t imagine they’d vote no.” 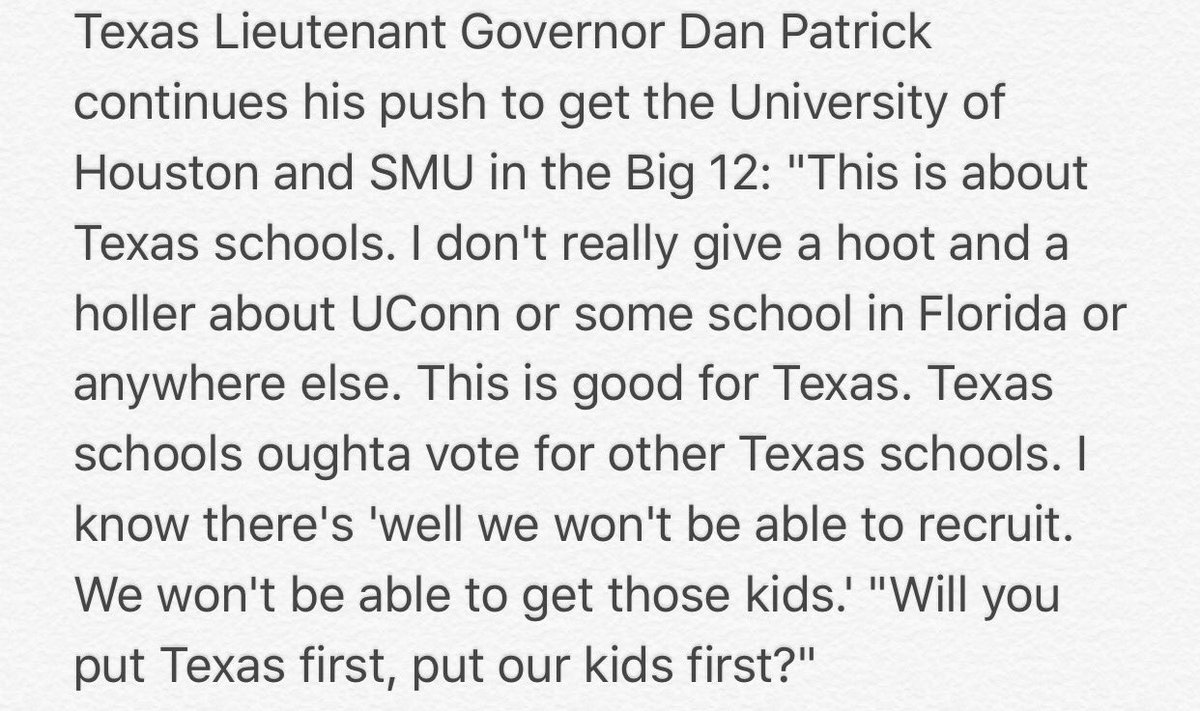 Is this guy ever not clueless? Doesn't he realize Texas schools already support Houston, but UH needs 4 votes from outside the state? twitter.com/markbermanfox2…

Heard today the Big 12 has issued the RFP for the championship game and is waiting to hear back from Dallas, Houston, K.C. and San Antonio.

I see you posted the AAS article. Not good for the Coogs.

Not sure how clued Bohls is in to the whole process. He seemingly posts a different guess every couple of weeks and seems to laugh at the whole thing.

One thing that intrigues me is that the presidents’ vote is on Oct 17 supposedly. The UH PAC is meeting at Fertita’s house on Oct 20 with one of the subjects being Big 12 talks. I know it’s been advertised for awhile, but the email that went out yesterday still has that as the main topic of discussion.

For Bohls, notice the lack of “according to sources inside the league” and such. He is just guessing. Pay no attention to the man behind the rag…

I’m trying to see why Patrick’s comments are good.

Maybe SMU and Houston is now the demand and just Houston is the compromise.

If not I can’t see another alternative where these tweets are a good thing.

Patrick that is a very interesting observation and it would seem strange to have the PAC meeting to discuss Big12. I guess we will have to wait.

Seems like grandstanding to show UH and SMU alums that he’s supporting our alma maters. However, it seems over the top and counterproductive.

SMU is the “ask” and Houston is what he wants. Part of compromise.

I think his and the governor’s tweets could be important in one way: it can hold the Texas’ public schools’ feet to the fire (as the presidents, chancellors, etc. are hired by the Board of Regents and the BOR members are appointed by the Gov.). Second, it could be a shot across the bow saying there will be no expansion at all without Houston to other out of state schools. Only 3 votes are needed to block any candidate, and Texas public schools make up two, Texas total make up 4.

I think that is why Boren made his statements. They weren’t directed at his Board, but Gov. Abbott. Boren was a gov, so he knows how the game is played.

Overall, I’d say it is a net positive. Why? Universities don’t get into conferences without political backing. Baylor had Ann Richards. Tim Kaine helped Va Tech. West Virginia had help from Joe Manchin. It works.

To borrow the classic line…

We will go to Texas and they may all go to Hell!!!

We don’t get in. This is our fate. Embrace it.

Should we,by some miracle, get into the Big 12, I will be ecstatic, but we should know by now we are perpetual outsiders.

No such thing as fate… and you need a new user ID. That name is pathetic.

You guys need to lighten up Coogjizz he is a good guy. Been through the tough times with us. Coogjizz is necessary for Coogkids is it not? I think he is balancing the false hope that we all have. I have to remind myself not to get too excited as nothing means anything until Bowlsby gets on the stage and officially states we are in.

I wouldn’t call it false hope.

There has been quite a concerted effort over a number of years to get to this spot. A lot of coogs working on the stage such as Dr. Khator (who is probably the best Chancellor in the nation) and Tilman Fertitta, as well as a bunch of people behind the scenes that we’ll probably never know about.

I’d say that UH has better than even odds at this point. Lets not get like Texags and their battered aggie syndrome “poor me” crap. We’re better than that.

Coogjizz he is a good guy

I get the expansion thoughts. However, good guy or not, the name’s not a good look. Just providing some honest criticism on the user name… Go Coogs!

With the horns losing it is getting fairly grim in Austin now … close but no cigar … Charlie Tuna is now blaming his defensive coaches … he has fired more coaches now than Lincoln fired generals … the thing they had in common was they were all incompetent.

Bohls is frustrated that the horns had promise of a great turn around but now it looks like another so-so season. They may win about 9 games … enough to keep the barbarians at the gate at bay … maybe. If the tuna man fires any more this season then put a fork in him … he’s done.

I think Patrick has some big money SMU boosters funding him. Only reason I can figure why he’s pushing for them. None of the other big TX players have mentioned SMU at all.

Harmless pandering. I doubt he expects or cares much there. The fact that Texas and Tech have come out publicly tells me arms are being twisted behind the scenes for Houston.

Possibly the Texas schools should stand together with Texas schools comment was made by him and then soneone reminded him that he is not a Senator from Houston, but Lt Gov of the entire state. Even those folks in Dallas.
His duty as a public servant is to push Houston first since we are the taxpayer’s school, then to promote our fellow Texans in Dallas. That is somthing anne richards got backwards when the flushed us and promoted baylor. As Gov it was her job promote and look out for all the schools, BUT the public schools first.

the Horns can block any other candidate until Houston gets in…If Texas wants us in, we are getting in…NO WAY 2 other schools get chosen over us,That is never going to happen.

It’s possible, but then why not push North Texas, UTEP, UTSA, or Texas State.