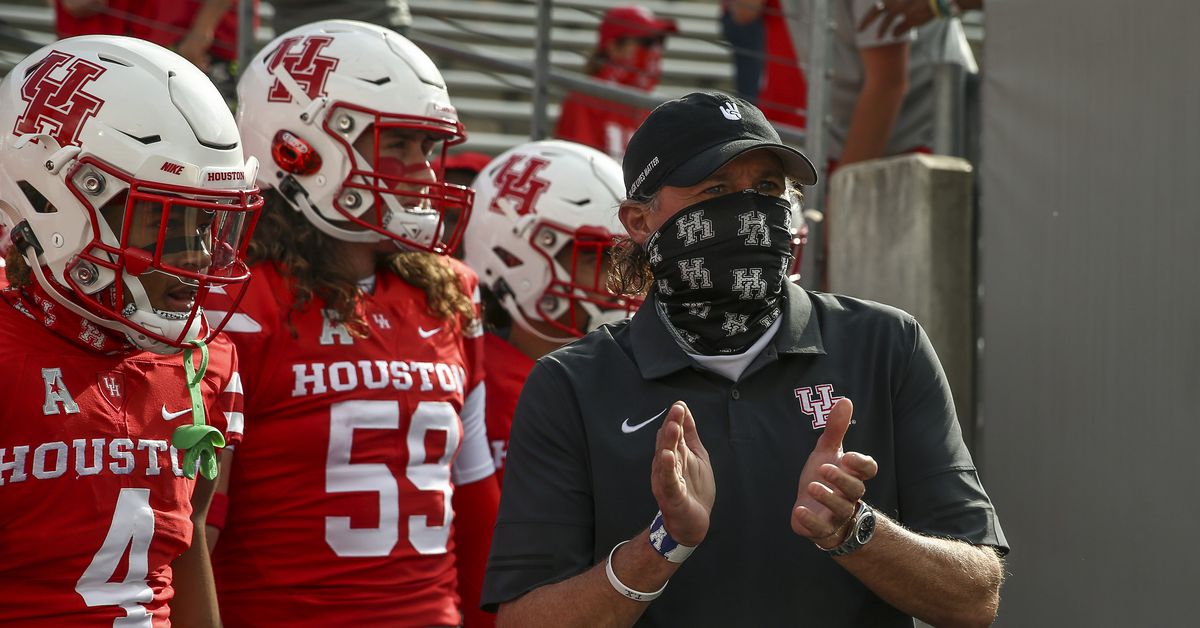 Expectations for Dana Holgorsen in Year 3

Next year is a big year, so hold all of your judgements until then.

I agree. I am not an OL coach so I will assume the write up was close on that front because the rest seemed reasonable

I’m not that positive. Reviewing the roster seems we lose a lot of key players-either graduating or opting for the pros.

Bear in mind that everyone gets a free year, should they choose (and should CDH…).
So…some Seniors might come back and contribute.

In my mind this season just is not a real season. And if it were me, all kids should get an extra year of eligibility if they want it. With everything going on in the world, harsh judgement just isn’t called for. Now next year… assuming there is some return to sanity, yeah there needs to be improvement for sure.

UH is last in recruiting in the AAC this year.

Where is your source?

Apparently, we aren’t allowed to have any expectations.

The man has to win 9 games and be in contention for a conference title.

I don’t know who is more tired of hearing that crap, me or Dr. Khator.

He says The Pearland Community Newsletter.

No we are not. We are currently 10 out of 11 teams. Tulsa is below us. I don’t like it but I finally accept that JUCOs are a key part of CDH’s recruiting strategy. Then, we back fill with transfers. We offer a bunch of kids in positions we need, but we get few commits. I think if we have a winning record, we could get more HS commits.

You seem to only have two states of mind: Depressive and maniacal.

I think we need to take into consideration that Rivals ranks on total stars–not average stars. Outside of Tulsa, we have between three and 11 less recruits than the other AAC programs (not counting Navy as they show 66 recruits).

Going by average star rating on rivals, we’re 6th out of 11 (they’ve got UConn in the AAC still, for some reason).

And for some reason, two JUCO recruits are two stars and one JUCO is not ranked at all. I have doubts that those are correct–or that any sort of actual time or effort went into entering that data. (EDIT:: Not clear to me the more I think about that the unranked person is JUCO or high school.)

We’re not where any of us would like us to be, but we’re not on death’s doorstep, either.

Anyway, here’s where I got the data:

I don’t know who is more tired of hearing that crap, me or Dr. Khator.

I agree with you, Mike. Most misrepresented quote from UH in my time. Having said that with the schedule we have next year, Holgorsen needs to win 9 games plus. Eight would be “meh”. Less than that, and there should be serious concern universally.

we have between three and 11 less recruits than the other AAC programs (not counting Navy as they show 66 recruits).

It’s not “misrepresented” at all.

First of all, it was a direct quote.

Second of all, she lived up to it when she fired Major Applewhite, did she not?

I’m with you. I took it her comment as something that’s she was serious about and committed to.

All the sudden, I am hearing that it was a joke…

I want to get to the bottom of this because she really did fire applewhite after the comment.

What is the truth?