Edited to add a link where I found the sadness from last night.

How many teams get a pass because somebody was not at 100% ?

I never will feel sorry for Saban… OK, if he gets cancer or something.
I actually caught an interview after our basketball game tonight on ESPN2. It was so sad 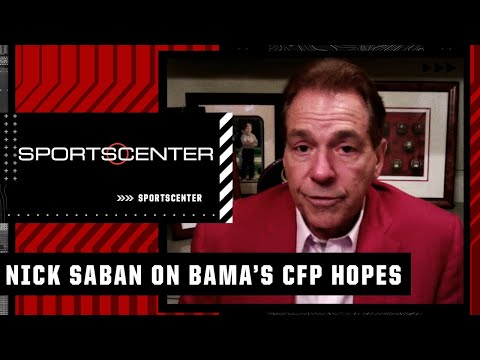 If that’s the case, we should be in the playoffs because we had 30 guys out including 7 starters on D and 4 on offense. We also lost several games close and played in OT a few times.

Wish our coach was doing the same tonight lol

If that’s the case, we should be in the playoffs because we had 30 guys out including 7 starters on D and 4 on offense. We also lost several games close and played in OT a few times.

And we beat Rice. Did Bama beat Rice?

We saw the interview during halftime. He was literally begging. He brought up Bryce’s injury multiple times.

Why would he UH overall record is 7-5 lol.

As a Texans fan I do want to see Bryce Young in the college playoffs since they most likely will have the first pick in the Draft. A little extra scouting in a pressue situation doesn’t hurt no one outside TCU.

He’s lobbying for his team and bonus, I wouldn’t expect him to say “Nahh we’re not that good we’ll take the Music City Bowl, that was our goal our year”.

I’m sick and tired of Alabama.

Man… But i’m afraid TCU would get massacre by Georgia if they drop to the 4th seed!

Saban needs to go cry in his own beer…nobody wants to hear his excuses. ESPN will allow him to do it on tv nationally, it makes good press. TCU should be in on all accounts. Bama playing Austin Peay late in the season, that’s what all these SEC teams been doing for decades, beating the little sisters of the poor, early in the season then late in the season.

So, what have you got against Mr Young to have him be with a miserable organization like the Texans !!

That is an SEC decision.

That is an SEC decision

I know…look at UM OOC schedule they pulled the same strategy this year. Why I am taking TCU in the PO in their matchup. Tougher schedule.

I think the SEC does this because typical last games are rivalry games.

Head to head against UT on the road, TCU had a better showing than Alabama who played UT’s backup qb. Saban can cry me a river.

He was literally begging.

I found it rather undignified and pathetic.

The crying for him is not so much today. I hope you all are overcoming the pain as well.

I’m sick and tired of Alabama.

While I gotta agree and realize that were any team to win and be on top for so long many would feel the same about them.

I remember interviews where they lose and make a big deal about how hard it is to win.

Yes, that is a given but Who feels sorry for the rooster? Looney Tunes PAL Series - Henhouse Henery (1949) Opening Title & Closing [PAL Laserdisc Print] - YouTube