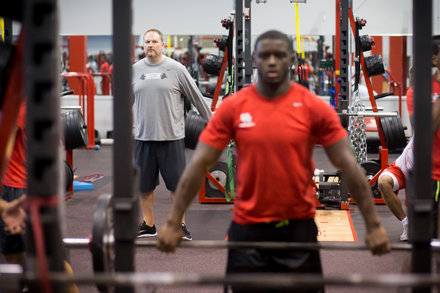 Head coaches and players emphasize the importance of the strength coach, and salaries for the position at top college football programs are growing. Yancy McKnight, the strength coach for the University of Houston’s football team, with cornerback Brandon Wilson.

As an assistant coach at the time, Herman had seen McKnight take Rice’s 2008 squad — “a bunch of kids who are doctors, lawyers, engineers” — to a 10-3 record. But McKnight’s greatest value, Herman said, was not strictly as a strength coach.

“What makes Yancy so special,” said Herman — who, in his first year as head coach, led the Cougars to a 13-1 record, including a win over Florida State in the Peach Bowl — “is he is 100 percent an extension of me and my voice, and it’s very, very clear that every time he speaks to the team, it’s me talking.”