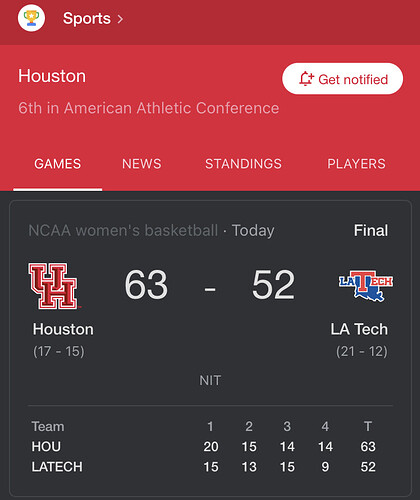 You know, it’s interesting because recently the Houston Roundball Review on YouTube was assessing Coach Ron Hughey’s 8 year with the Lady Coogs & whether or not he should continue going into the B12.

Now’s the time to make a deep run into this tournament and solidify his job going forward and into the BIG12.
#GiCoogs!

Our womens program is totally irrelevant and has been for years.
There is no hint of it getting any better under the present coach.
But like baseball unless things drastically change soon we will be at or near bottom of Big 12.
Hughey has the same facilities and recruiting area as the mens program with totally different results.
But since womens hoop moves the needle zero and few care I can see us not making any changes

That’s pretty much what was said in the YouTube video discussion I referenced above. I’m just getting familiar with the Women’s Basketball team, and by reading some of the close games they had last year, along with some competitive games against much tougher competition, I thought they’d do better this season.

One of the more thought-provoking moments in the discussion was questioning if UH (mainly Pezman, Khator & Fertitta) are complacent and uninterested in the Women’s Basketball team because from the looks of it (8 seasons of subpar performance with no NCAA appearance), it sure seems like it.

The Big 12 is a league that has some programs that care about women’s hoops. Iowa State and Baylor outdraw our men.

Baylor and T sips has owned Houston area recruiting for years. No way that should be happening

Game in Fertitta on Sunday: 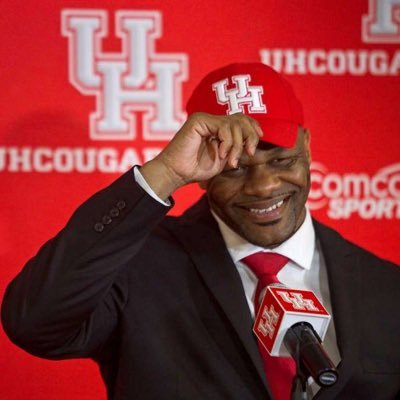 There we go. That’s what the hosts were basically trying to bring to light: do the Athletic directors, boosters, etc. really care about our Women’s Hoops? I would hope so, but after hearing some of the arguments they touched on, I’d say that there may be some apathy (a word Sampson used to describe Athletics attitude toward UH Men’s basketball when he took over the program).

I can be honest and say I only cared about Women’s Hoops during the Joe Curl years, but he was also an incredible ambassador for the program. He went out of his way to make media appearances, cook hot dogs for students and do everything possible to drum up interest and support for the program. There is never going to be organic interest in women’s hoops unless you have a no-brainer Chandi Jones type player that everyone knew about or heard of coming into school. They’ll have to win and win BIG to get anyone in the building.

Girls won again today. On to round 3. 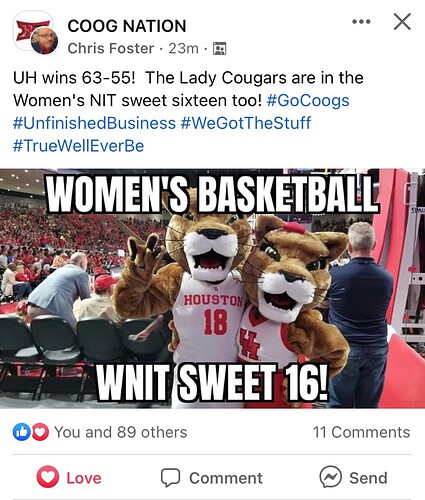 This is cool for sure. But…the regular season wasn’t great. Still would have liked to seen more from them and get to NCAAs.

While I have been a critic, this is a good sign, perhaps beginning to jell and develop their own culture.

How many years have we been saying this?
The WNIT has no interest whatsoever.
I looked on Score app and all the mens scores are available for both the Dance and NIT, but for the women only the Dance scores.
That tells me no one cares about the WNIT.
Hughey has been here eight years with very little to show for it

I looked on Score app and all the mens scores are available for both the Dance and NIT, but for the women only the Dance scores. 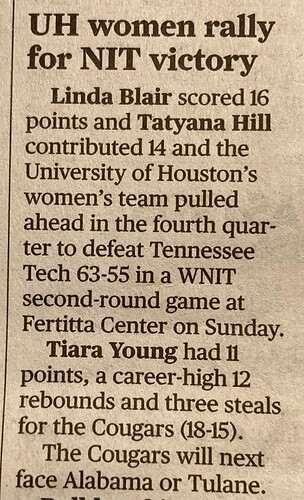 Well it is nice that someone cares enough to write a small story…I am still rooting for the Coogs, but hoping a change will be made at the end of the year…

Did we fill the Fertitta?? J/K it was probably empty