Got to be excited for the hidden gem. Although I’m not delusional about the mental adjustments that are needed. It’s Coley job to lose. Hey practice is not real games. QB’s don’t get hit.

i see him as more of a Cam Newton type qb. Straight swagger with this kid

Its the most realistic take

Not really feelin this

its okay. Hes a troll. I defended Tank on a garbage 247 article by one of their non houston writers. So this clown came over to troll

Ken is back with a different username? Lol

i see him as more of a Cam Newton type qb. Straight swagger with this kid

Is Ken talking to himself

Him and Kevin Durant lol

This is wild stuff. 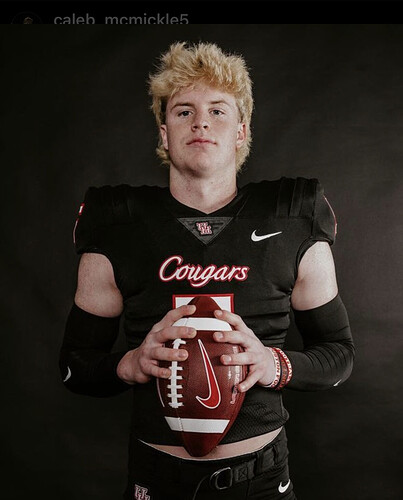 Those black uniforms are sick!

Another year or so of letting it breathe before he reaches Hawk elevations of pure Chad energy but an excellent start.

Agreed. The black uniforms are tremendous!

Need a black helmet to go with it.

Not a fan of the mullet. Shows immaturity plus hes not naturally that blonde

On the other hand how mature do you think a HS kid should be? Look at all of the pro athletes who have similar hair styles, like Mahomes for instance.

relax red. He’s a troll. Gotta give it to him though, he’s persistent. Must not have much else going on in his life