Case tearing it up so far. 1 passing TD and 1 rushing TD. Looking fantastic on the big stage.

Here’s the other two:

Hayden made 6 tackles in the loss.

Congrats to case but i was reading the tweets and no one mentioned him because of Thielen reaching 1k yards. Either way, Congrats Case we knew you had it in you. 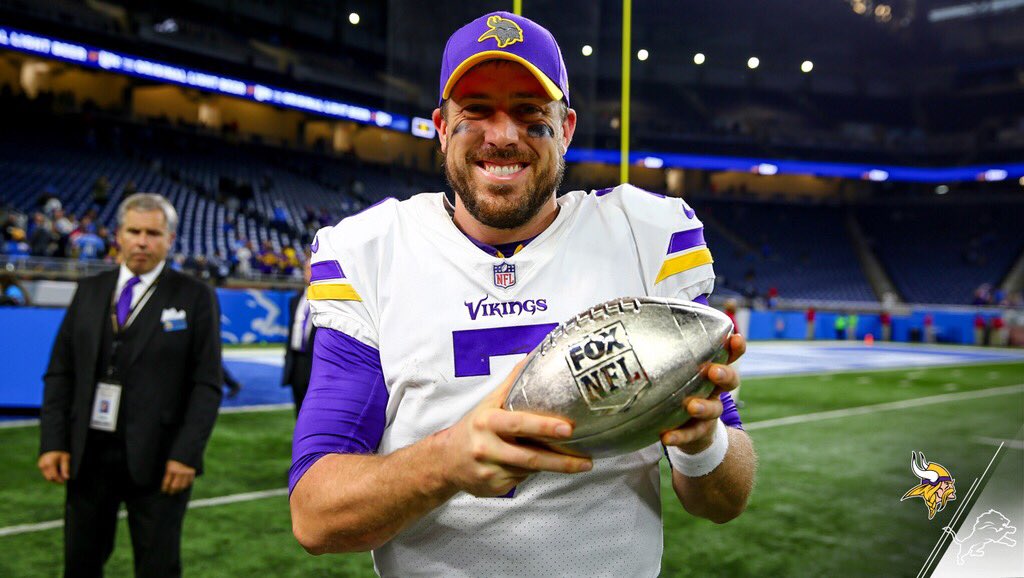 The ball trophy in that picture above is given to the player if the game, no more turkey legs to the players of the game apparently…

Case Keenum has arrived on the national stage as article after article has been written after his stellar performance on Thanksgiving Day in the Vikings 30-23 victory over the Detroit Lions. Keenum was 21-30 for 282 yards and 2 TDs while also rushing 7 times for 20 yards and a TD. The Vikings win puts them 3 games up on the Lions in the division with 5 games to go and also gives them the #2 seed in the NFC by their lonesome as the Saints lost. For more on Keenum, check out our ongoing “Case Keenum Starting” thread and go vote Case for the Pro Bowl.

In the same game, DJ Hayden had a good game, making 6 tackles and not really being burned by his former teammate. Hayden has been very impressive this year and has helped keep the Lions just a game back in the NFC’s 2nd wildcard race.

William Jackson III didn’t record any stats in the Bengals 30-16 win over the Browns, but that doesn’t mean he didn’t impact the game. After missing last week, Jackson played 47 of the 67 snaps on defense, drew a taunting foul on a Browns receiver and made a crushing block on the punter that allowed Adam Jones to return a punt for a TD (that was called off due to a penalty earlier in the play). Brandon Wilson was penciled in as a backup safety, but only saw the field for special teams where he didn’t record a stat. The Bengals currently sit a game back in the AFC Wild Card race.

Charles Simsagain saw limited action for the Bucs in their 34-20 loss to the Falcons. Sims had 1 carry fro 3 yards and 3 catches on 5 targets for 26 yards. Doug Martin left the game early with a concussion so it’s possible that Sims may see his workload increase, but it’s not likely. Bucs are 3 back in the wildcard race in the NFC and more than likely just playing out the string.

Elandon Roberts was set loose to attack in the Patriots 35-17 win over the Dolphins and the results were about what Coog fans would expect. Roberts made 4 tackles and had 2 sacks in what one writer called “arguably his best game as a Patriot.” The Patriots seem to be improving quite a bit on defense as the season goes along and as players get used to their roles and they remain tied with the Steelers atop the AFC.

Joey Mbu didn’t record a stat in the Colts 20-16 loss to the Titans. He did see the field on 9 snaps and the Colts line did a pretty good job limiting the Tennessee rushing attack to 92 yards on 28 attempts. Colts are now 3-8 and 3 games back in the AFC Wildcard race.

Wade Phillips was able to see his defense get back on track against the NFC South leading Saints as the Rams won 26-20. The Rams defense held Drew Brees in check and limited him to 246 yards and 1 TD and sacking him 3 times. They did give up 123 yards rushing and a TD on 17 carries, but 74 yards came on one play. With the win, the Rams now hold the tiebreaker over the Saints and currently, at 8-3 sit in the 3rd spot in the NFC, 1 game ahead of the Seahawks for the Division lead.

Tyus Bowser made 1 tackle in the Ravens 23-16 win over the Texans Monday night. Bowser continues to see limited action as the Ravens have a deep corp of LB and he’s currently behind future-HOF Terrell Suggs on the depth chart. The Ravens continue to be in the mix in the wildcard race and would open the playoffs as the 2nd AFC wildcard if they started today.

Looking ahead to next week:

Is there any news on how greg ward is doing?

He’s been mentioned a few times when the Eagles play running QBs like Cam Newton as he’s usually the scout team QB in those scenarios.