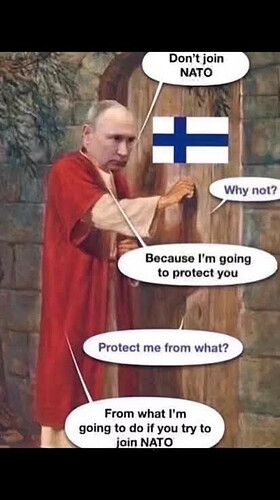 Josh Hawley is a fool.

Finland and Sweden are great adds.

That border with Finland is tough territory for Russia.

I wish all the other NATO countries will ratify as well.

Europe’s vulnerable north flank will soon be shored up!

I just wonder how much of NATO’s talk will translate into action if the time comes. As someone of polish descent, who grew up with a set of very patriotic Polish parents, I was always reminded how France and England stood by and watch as their ally had to fight a two front war. France could have invaded Germany from the other side but stood by and watched. Poland had ordered modern French aircraft that were never delivered and instead kept by the French to shore up their military, which ironically collapsed rather quickly, I want to say almost as fast as Poland, while only having to worry about a one front war and had a whole British army fighting with them. If you consider the polish surrender as october 6th which was the day operational group Polesie, commanded by Franciszek Kleeberg, surrendered after running out of food and ammo.

The whole situation you explained is why NATO was created.

My point is that Poland, France and England were allies just like The NATO countries are allies right now. Yet when it came to actually doing something they just stood by and watched. So I am really hoping that things will be different this time, If the need arises.

Wouldn’t say “allies just like now”. There seemed to only be a flimsy alliance between France and Poland, nothing involving England until after WWII started. NATO was set up to prevent that from happening again. You can still doubt it if Russia invades a NATO country, but now you would be doubting 30 countries not stepping up. I think its a very strong deterrent.

There is a reason why Russia doesn’t want their neighbors in it.

What’s left of the process now and how long might it take for them to be full NATO members?

All the members have to ratify, as I understand it, and that could take awhile.

Interesting that all the members must ratify and not just a high percentage. Seems to me that would make the bond even tighter. Hope Turkey doesn’t present problems…

Russia’s invasion of Ukraine has prompted Sweden and Finland to abandon their long-held nonaligned status and apply to join NATO, but Tu rkeyhad blocked the move until now.

France could have invaded Germany from the other side but stood by and watched.

Technically, France did invade Germany. But the half-hearted offensive never got to the Seigfried line and the French later withdrew.

Were Finland and Sweden really the best expansion candidates for NATO? I don’t see that their addition drives new revenue or adds TV eyeballs. Will they sign a GOR? Will NATO get a better TV deal?

No. Washington and Oregon are better choices.

No just more mouths to feed for the US

They were the only AAU’s left. Except ND who had a standing invite to NATO.

Were Finland and Sweden really the best expansion candidates for NATO? I don’t see that their addition drives new revenue or adds TV eyeballs. Will they sign a GOR? Will NATO get a better TV deal?

Don’t forget there is the contiguous country rule. Some have argued that going out and grabbing Australia would be worth it, throwing in New Zealand as a travel partner. Then do you keep the NATO name? If you do that, maybe look at Japan/South Korea for more countries in the UTC+8-10 time zones?

ly AAU’s left. Except ND who had a standing invite to NATO.

I can’t stay up to watch a war in JST, so not unless they form their own division and we only meet in the finals.