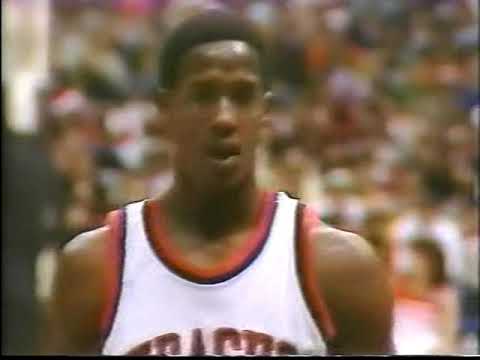 Jim Boeheim was the head coach back in 1982 as well. Holy cow!

Thanks. I sure enjoyed watching that.

For a time, was considered one of the greatest games ever played.

Remember watching this game when it aired. Clyde had a spectacular dunk that almost had Billy Packer stumbling over his words. I remember Coach Lewis saying after the game that he knew he had a great team after this one,

I don’t remember that game at all. I remember the Auburn game because I was there and remember Barkley , but this game i guess I missed.

I remember watching it when I was a kid.

Legendary game at the Carrier Dome!

It wasn’t the dunk as much as it was that what led to the dunk. IIRC, Clyde either grabbed a rebound or stole pass, then took off, dribbling full-speed the length of the court, including whipping a behind-the-back dribble around midcourt that allowed him to blow past a defender, and make one of his patented dunks

I was just about to turn 10. I remember the loss but not the game itself.

Over the years I got so worn out hating Jim Beoheim that I developed a grudging respect for him just for surviving my hatred.

i remember watching this game as a kid. i believe it was a sunday 11am start, i think we went to early mass so we could be home in time to catch the start of the game

The Coogs must avenge this loss, as well as the 1996 Liberty Bowl.

That is a legitimate reason for everything.

For a time, was considered one of the greatest games ever played.

I remember it as a hyped up game…the Carrier Dome was still pretty new. Boeheim about to enter the golden era of the Big East…BB was so fun in the 1980s. Players stayed 4 years and TV ratings were great.

Cuse fans think the greatest game ever was our 6 Overtime game with UConn.