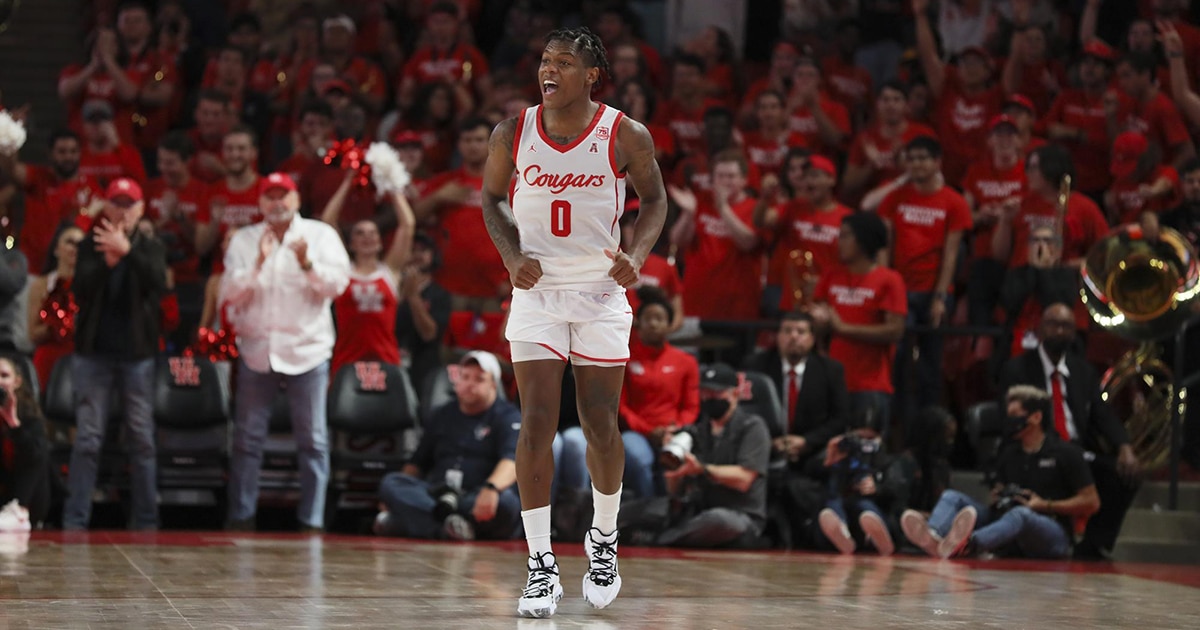 Sasser averaged a team-best 17.7 points per game before suffering a season-ending foot injury 12 games into the season in December. The season before, Sasser was a second-team All-American Athletic Conference selection, one season after being a member of the conference’s all-freshman team. Remarkably, despite the injuries to Sasser and his teammate Tramon Mark (10.1 points per game in seven games), Houston finished 32-6 (15-3 AAC) and advanced to the Elite Eight after wins over No. 4 seed Illinois and No. 1 seed Arizona.

@TJCoog sasser is the only guard among the top players

caleb love at 15, under numerous other guards…

i know we were tralking about this the other day, but sasser will come in as the most touted returning guard in the nation, and it might not be close

I guess we need to set parameters on what “touted” and “not even close” means if we’re going to get into a scoreboard thing.

I agreed with Joprior that I thought Sasser had a good shot to be pre-season first team AA (which would make him considered the best or second best returning guard), though qualified I couldn’t really think of who his main competition would be.

Sasser being the first guard on a list of top 15 players coming into the season from someone plugged in like Katz with several other guards on the list right behind him isn’t really what I was disputing.

My thought was that Caleb Love may get more national attention coming into the season even if plugged in people don’t necessarily think he’s better than Sasser.

Here’s what I meant. Timme announced he’s coming back and ESPN had a link to a story on the men’s college BB site within 21 minutes. There was a link to a story pretty soon after Strawther said he was coming back. Same with Trevor Keels staying in the draft and Terquavion Smith staying in college and Malachi Smith transferring to Gonzaga. Sasser’s decision to stay wasn’t even a stand-alone story on the ESPN Men’s College BB page. IMO that doesn’t make him way more touted than the rest of guards coming back to the extent that it’s not even close.

Marcus Sasser finishes the year as the POY, consensus first team All-American, while we go through the season as a top 3 team. Can someone say Lottery Pick?

He has the talent to do it!. Would love to see any part of that come true!!

I think everything in your first sentence is possible. Lottery pick is tough though. Since 2016 I think there have been like 3 seniors drafted in the lottery and all of them were 3 and D wings. I guess you could count Davion Mitchell as an outlier Sasser could hope to replicate since he’s a pure guard and was in his fourth year of college, albeit one of them a redshirt. And for what it’s worth, Mitchell made a massive jump as a player between year 3 and 4 to get into the lottery. If Sasser makes a comparable jump from what he showed last year in 12 games and at the G League combine, that’s scary for the rest of the country.

It is ridiculous how underrated Kendric Davis is out there. I am happy and would take Sasser over him all day but we aren’t talking the grand canyon by any means between them.

Katz had him as the next best “guard” after Sasser who isn’t a true “wing” on his list and he wasn’t all that far behind Sasser. That’s good credit in that list. But he is a lot like Sasser in that he’s really good and folks who really follow college hoops know that, but to the average fan he’s not a huge name anywhere close to like a Timme.

Look who you’re talking to. I’ve been driving the Sasser bus since he was a freshman.

For sure you have. And I had been a Sasser-ceiling skeptic to an extent even though I love him as a player. I don’t think he is reasonably likely to play his way into the lottery but I’m not going to rule it out either. The 6’7" wingspan makes it much more realistic than I thought it was before I knew that. If his wingspan had come back like 6’3" I’d say it’s virtually impossible.

@TheFieldOf68
THE TOP 5 returning players in college basketball! Agree or disagree with the order? Who are the biggest names we left off? twitter.com/thefieldof68/s… https://t.co/cYGVW6GLwp 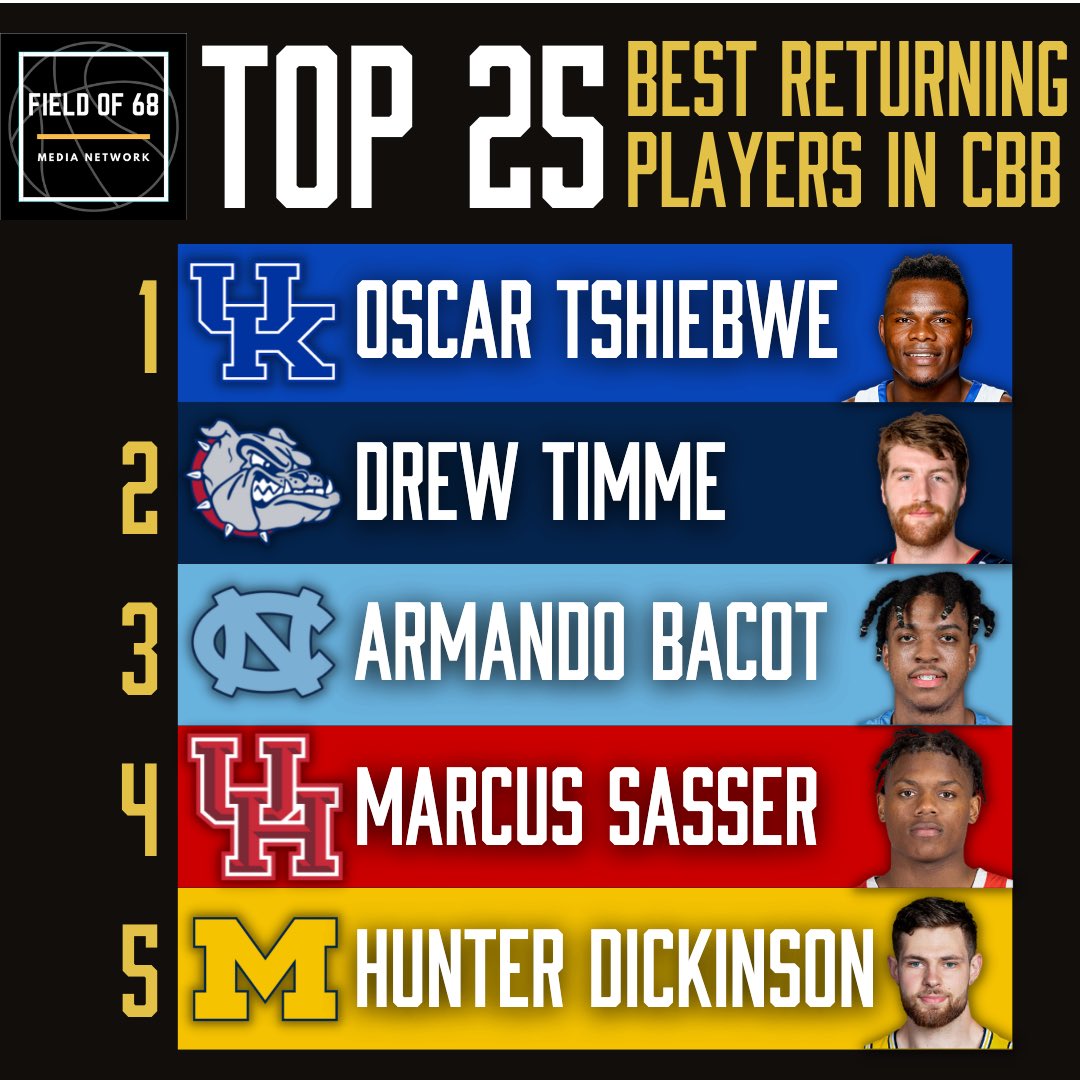 All on the table for Sasser. 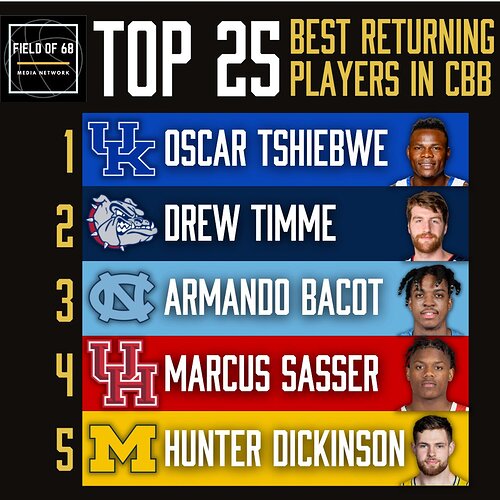 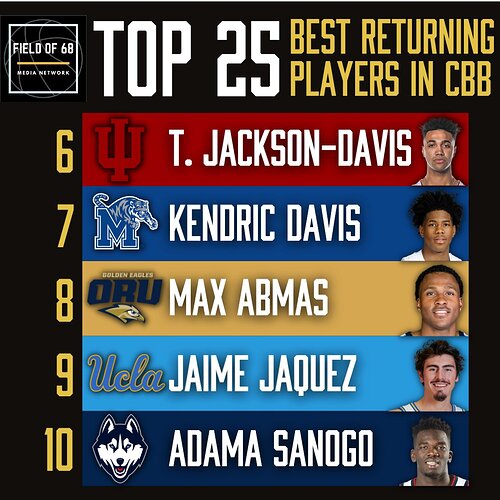 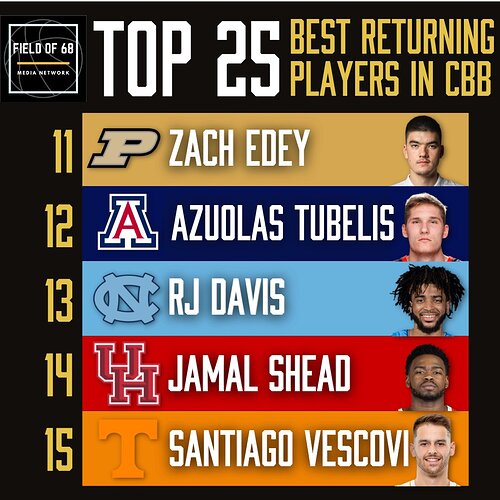 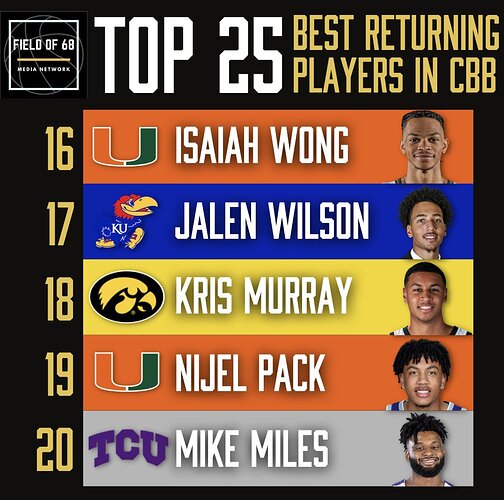 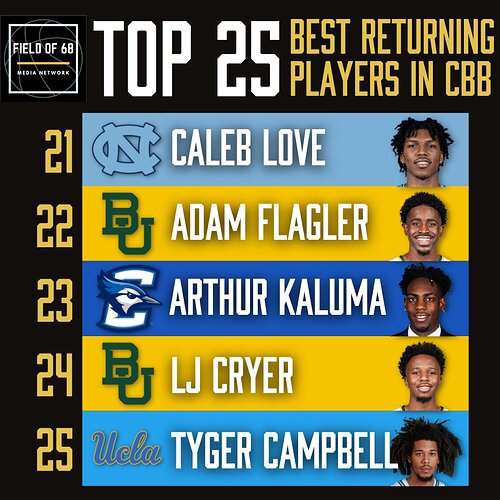 LJ Cryer will he play a full season?

Abmas is better than everyone you just mentioned. He just plays for ORU.

I wouldn’t have Abmas 8th. He can hit shots, but he’s not a complete player in my opinion. I watched ORU last season and their defense was soft, including him

Why not include Antoine Davis from Detroit? Hes similar to Abmas as a scorer

What about Strawther for Gonzaga, suprised hes not mentioned.

Surprised not to see the Mumphish 10th year senior Deandre Williams (?) missing from this list. I take it Jaylen Duren is back too?

heres a different one from a week ago 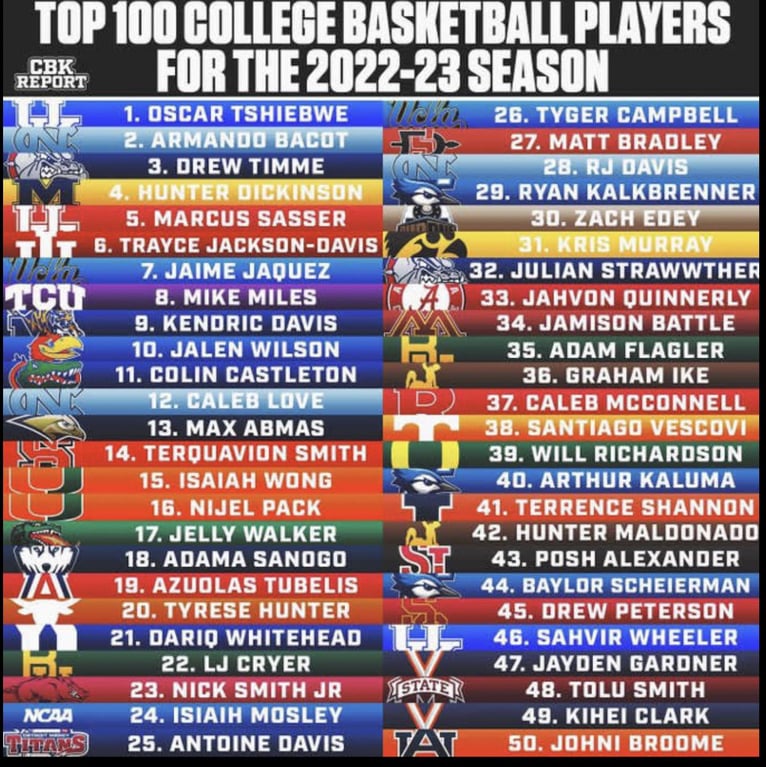 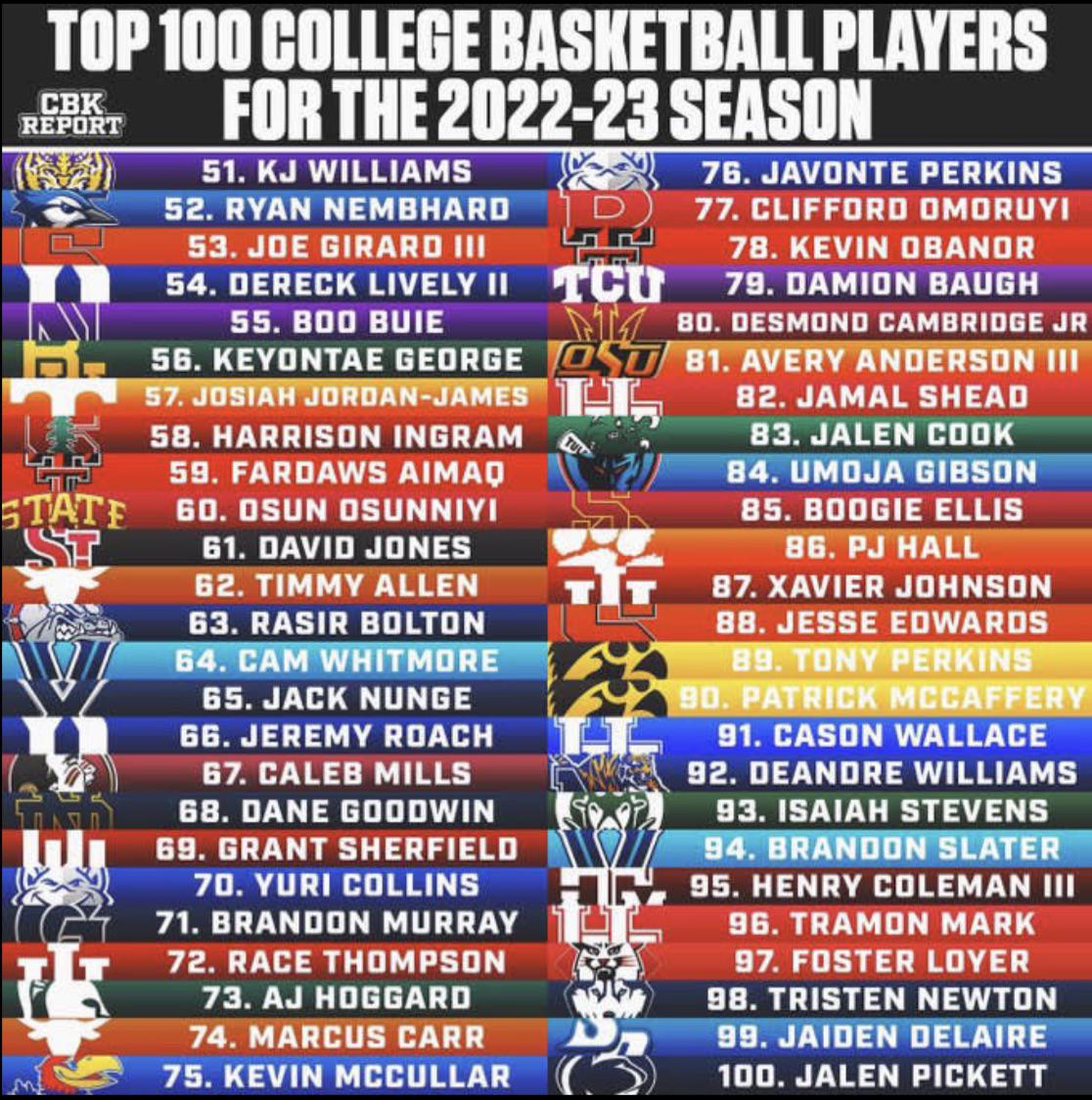 abmas is better than antoine… im not sure its close

abmas plays in a better mid major league and actually wins games, and has upset top 25 teams . davis plays in a bad mid major and detriot is still terrible