I’m just starting to understand hormones working, differently on different brains and genes mutating and certain people are just trying to fill avoid somehow. The Aztecs or the Mayans or Incas identified 5 genders.

I used to think that just had medical problem. I don’t anymore. Pursuit of happiness and all that as long as they don’t try to convert me.

The Aztecs or the Mayans or Incas identified 5 genders.

Yet another factoid I was unaware and somewhat surprised by…what links
please ? Yes I’m lazy, it’s late, and dealing with 3 sick boys

An old fraternity brother of mine who is an endocrinologist (who, FWIW, is a straight, cisgender male, and married with kids), is apparently a recognized expert in how to use hormone therapy to help people change their gender.

Emory endocrinologist honored for work with the transgender community | Emory...

I used to think that just had medical problem.

It is. It’s a form of body dysmorphia. Having said that, if an adult wants to inject themselves with hormones, that’s their deal.

I think it’s both a brain issue as well as spiritual. If you took a reg guy or female and they hung out with mostly trans or gay people, it could affect them bc I think it’s spiritual as well. Also, what does God think? We all know and once a person is on that path , it’s it’s almost 100% that they can never break out of that lifestyle. God forgives but this is one of the biggest things for them to ever break away from spiritual and trans people have the operation making it almost impossible to ever break free. Also a guy that has the operation to become female, usually has a much smaller dating pool bc reg guys want a true biological female so the trans guy has to date a lot of really strange guys or be a lesbian and date women. I also don’t think reg guys should discriminate or beat up trans people which shows deep seated insecurities within themselves. Gay people and trans people have a tough road ahead of them and like my dad said, in any situation, try not to make someone else’s life more difficult than it already is. So I think God can forgive bc we all fall short and we need to try all all get along and not make life more difficult for others. Like the Beatles song, let it be or live and let be. I don’t agree with what they are doing but I don’t make their life more difficult than life is being a hater.Treat all humans with respect and move on with compassion bc life is tough enough for all.

From a spiritual perspective, and purely for debate and discussion, consider what a Catholic priest once told me regarding this topic.

He pointed out that God generally makes a person with one particular type of genitalia, and likewise makes them with either a high level of testosterone and a low level of estrogen, or vice-versa, in accordance with said genitalia.

From that priest’s perspective, that’s how God “made them.” His point was that if a person can’t accept how God made them…(as a transgender person apparently cannot, in his view)…they what can they accept?

Just offering that up for discussion.

There are LGBT people of all religious faiths and backgrounds. Their identity, who they love, how they express themselves and ultimately how they love themselves is not incongruous with their faith.

I found this: still looking for the Native American version but it’s problem similar. 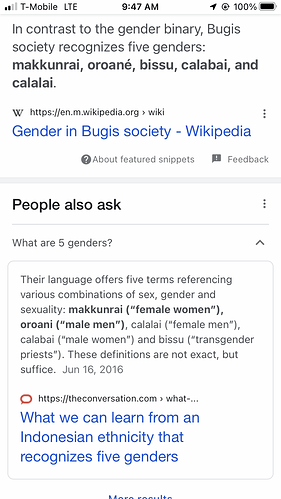 It’s a dangerous path the trans are taking from a God perspective and prob a lot of trans people lack the spirituality in their lives so they might not believe in the Christian point of view to begin or reject it but other sins are easier to get out of vs this one which is my point. Whether people believe it or not I’m 100% sure it’s spiritual then it affects the brain but I still take the Christian point of view of being compassionate on other people’s issues.

That is true there are many religions out there but from a Catholic faith point of view, our bible says it’s wrong like any other sin but tougher to break free from so this is just my point of view but again, I don’t hate them or discriminate to make it tougher in their situation.There’s a neflix show called Navaro cheer about Navarro College cheer and my daughter was a high school cheerleader and is a coach at a gym so we’re watching it. They have gay guys in the cheer group and their coach Monica on the show is a very conservative Christian but she treats them all the same which is the Christian way. It’s not our job to judge others and we should have respect and compassion for all human beings which is what God wants us to do in everyday life.

If you took a reg guy or female and they hung out with mostly trans or gay people, it could affect them bc I think it’s spiritual as well. Also, what does God think? We all know and once a person is on that path , it’s it’s almost 100% that they can never break out of that lifestyle.

I’ll read the rest later, but couldn’t get past this part, where I learned that “the gay” is both contagious AND incurable!

Yeah bc it’s spiritual first then the brain. If your daughter hung out with strippers it could affect her.
It’s just my opinion and y’all can test the theory Lol.
Not hating or judging, just my opinion.

You’re missing my point in that being LGBT does not mean you can’t be Christian. You’re doing this thing by putting LGBT on one side and Christian on the other creating an artificial division. It is not one or the other. I would wager that most of those gay guys in that cheer group grew up in religious households most likely Christian and probably claim that faith as their own. The Catholic catechism acknowledges and affirms that people can be same-sex attracted and that it is not sinful to identify that way but holds to Side B queer theology sexual ethics. There’s a distinct difference between activity and identity that the Catholic Church and other mainline Protestant traditions are trying to navigate. Most, if not all, are Side B with the momentum going towards Side A. But it’s important to not conflate activity with identity as far as LGB. Gender Identity is a separate issue altogether but that discussion is also moving in a more compassionate, inclusive and affirming way. The Church will eventually catch up with the science and reality.

Another point is that males raised by just a single mom have more probability of becoming gay bc no father figure in the house so the kid just sees his mom as the role model so the breakdown of the traditional family plays a role. Again it’s a brain issue bc the kid has no male role model. It doesn’t always happen but most gay kids come from broken homes so again it’s brain and spiritual bc God intended to have the male and female leading the household then there are less chances of things going wrong from God’s point of view. There have been studies that most strippers come from broken homes with no dad so they crave male affection so it’s really a daddy issue. Next time your at a club, ask the stripper her background lol.

If you believe this and you follow the faith tradition of the Catholic Church then you’re the one at odds with Church Doctrine.

I agree gay people can be Christian and forgiven by God bc it’s just their struggle as like we struggle with other sins. So the cheer coach is right in the show bc she prob knows her sins. As far as my view ,God looks on their sin issue just like the sins I commit. It’s just that I have a better chance at reversing course on what I do wrong vs what gays and trans do. None of us are really better than others. Jesus said don’t look at the spec in your brother’s eye bc of the log in yours or something like that. I’m not even a great Christian, I do a lot wrong to this day so I have compassion bc I grew up in New Orleans / the area partying all the time.

Hadn’t quite heard that one, but there is one study that was done of planned children from lesbian households (conceived via sperm donors) that showed that adult children from such families were somewhat less likely to identify as straight than average.

Quote: For this latest report, 76 children of lesbian parents, now all adults in their mid-20s, were asked about their sexual attraction, identification and behavior. For comparison, researchers demographically matched these offspring with 25-year-old participants in the National Survey of Family Growth (NSFG).

That’s not really true. The Protestant and Catholic bibles are fairly close in teachings. Their bibles are clear on what’s wrong and right and I think it’s the truth. I’m only wrong in that I continue to sin like we all do it’s why God sent Jesus bc us before him and now struggle daily. My whole point was that I do think homosexuality/ trans is wrong biblically and it’s spiritual etc but we’re not better bc we do other wrongs. Now if we take God out of society and forget he is there then most anything is ok. The Catholic doctrine doesn’t condone trans or homosexuality but it forgives.

So if this discussion was with no God then y’all would be correct but I couldn’t help bringing the God point of view on family and spiritual part which is a factor.

From a spiritual perspective, and purely for debate and discussion, consider what a Catholic priest once told me regarding this topic.

He pointed out that God generally makes a person with one particular type of genitalia, and likewise makes them with either a high level of testosterone and a low level of estrogen, or vice-versa, in accordance with said genitalia.

From that priest’s perspective, that’s how God “made them.” His point was that if a person can’t accept how God made them…(as a transgender person apparently cannot, in his view)…they what can they accept?

Just offering that up for discussion.

I wonder what his idea would be on people who are basically mixed genders. As a big track fan, there has been a ton of debate on the women who have internal testes instead of ovaries and produce male levels of testosterone. I’ve been told before by Christians that god does not make mistakes as a reason why gay people are making the choice to be gay and not born gay. So what is the case with these people who have both male and female organs? A mistake or is the Christian god saying its ok to choose which one in their case?