Kelvin Sampson will speak with media at 11 am

Thanks @AYanez_5 for the news

@JonRothstein
Source: The return game of the home-and-home series between Alabama and Houston will be on December 10th at the Fertitta Center.
6 Likes
AYanez_5 (Andy Yanez) August 2, 2022, 10:05pm #5

Parts of the schedule have been leaking like crazy lol. There was a reported MTE today with Oral Roberts and TSU.

And Joseph’s track too:

Love my Coogs and will be at every game, but geez that is a pitiful non conference schedule. Ok lets move on…Go Coogs…

We will be sold out, but those Tuesday night games will be half empty ‘sold out’. 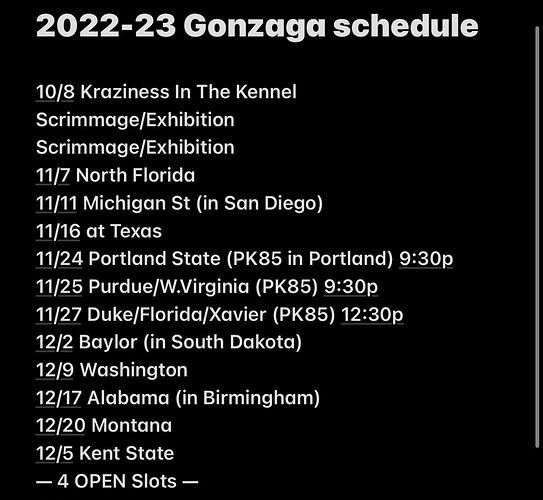 Gonzaga, who plays in a weaker WCC, than the AAC. Has to lockup the majority of their Q1 wins in the non conf

Credit to the Zags.

Baylor & Texas. We recruit the same territory. So maybe thats why Baylors not giving us a Neutral site game

@JonRothstein
John Calipari announced tonight at Rupp Arena that Kentucky and Gonzaga will start a home-and-home series on November 20th in Spokane. Return game at Rupp Arena in 23-24. GREAT for college basketball.

Memphis, under coach cal, had to do the same thing.

I was really hoping we would play in a tournament. Oregon and Virginia on the road will be tough. Sure wish we had a few more big names on the schedule.

In CKS I Trust.

Here is the nonconference schedule. Reminder that Kelvin speaks to media at 11 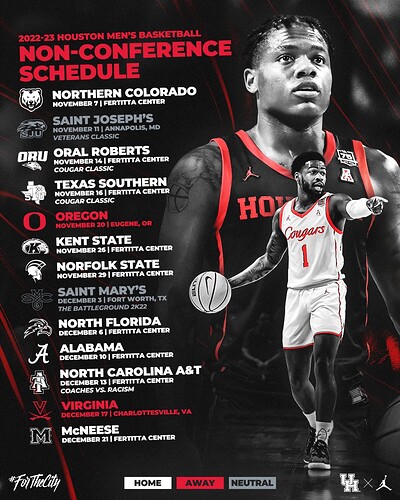 No more Rice. Houston is hosting an MTE with TSU and Oral Roberts

. Based on schd or lack of the Coogs are projected as 8/9 seed or may slide to bubble teams. 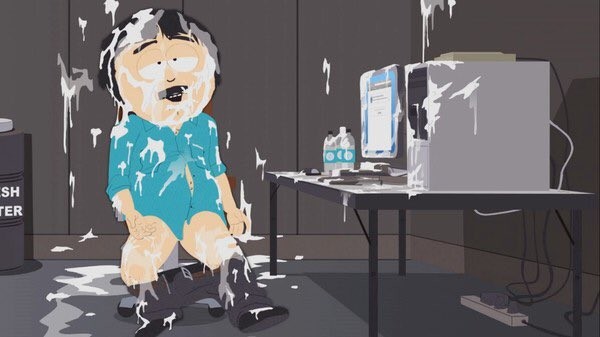 @RoccoMiller8
Observers may consider Houston's schedule as disappointing. That would be a short-sided opinion. I can count well over 100 programs, that refused to play Houston. Easily the most avoided team in the country heading into 22-23. Final note: TSU comes to Houston on 11/16. twitter.com/RoccoMiller8/s…

The Houston Cougars have what appears to be a complete non-conference schedule following today's updates. Likely the most anticipated season since Phi Slama Jama. - Can confirm the game vs. Rice will not happen this season. - Need a date for Texas Southern game. #AAC #Houston https://t.co/ZHf6EgastS
CMCoog17 (Cristian) August 3, 2022, 3:50pm #20

I’m glad we get all those home games but i also want better opponents. But i also don’t understand why anyone would avoid us if we’re a quality loss or does that not matter?