USA Lays The Wood To UT

I’m sure UT could give a flip…

Interesting. And how will writing this article affect UH recruiting? So basically this article makes it sound as though he is gauranteed to leave at the end of the season whether it’s UT, USC, and or LSU. I wonder how Helton feels about this.

the reason people speculate about Tom Herman leaving is that most young, aspiring coaches see UH as a great place to build a resume on their way to a large, state school job

UH is a large state school. I know what you mean, but come on guys…

They’ve been underestimating us for years…Go Coogs!!

We have qualified for something better- just a matter of time

While I agree we shouldn’t worry about what will happen until after the season is over, the whole idea that UH is a stepping stone is very distracting. On some level it had to affect the program does it not? There’s only one way to shut stories like this down. CTH has to make it clear he doesn’t plan to go anywhere. Since he hasn’t done that, then the media will speculate. Sucks, bit until we’re in a P5 that’s the way it’s going to be.

We can’t be taken in by the whole personality sales job that Herman is doing. He’s effective, and it’s working, but that whole smooch thing was a bit gross. UH is bigger than the coach. Yeoman, Briles, Sumlin, and now Herman. The will be others.

Your right, it will affect recruits if they’re buying from Herman, and not buying UH. That’s why facility upgrades are important

Tom Herman had done a great job here but he’s human. At some point, he starts holding back on recruiting for UH IF he’s already decided to go to UT and if he thinks the job will be there, which seems likely. It definitely distracted sumlin so much he got out-coached in the conference championship and the honor of playing in the sugar bowl. Your right, we’re being set up, but I’m going to embrace the bright side.

The fact is, we attract rising coaching talent, and its proven that good coach can win here, and that when one coach leaves we don’t rebuild, we RE-LOAD. If Herman stays, great!!!

We can’t be taken in by the whole personality sales job that Herman is doing. He’s effective, and it’s working, but that whole smooch thing was a bit gross. UH is bigger than the coach. Yeoman, Briles, Sumlin, and now Herman. The will be others.

I don’t think it’s possible for me to disagree with you more. For 30 years I have heard the line about how we will just grab the next up and coming coach and all will be fine. And that thinking got us Jenkins, Helton, Dimel, and Levine and we lost an entire generation of Coog fans. Coaching carousel’s sets programs back.

Herman has brought a culture here unlike any other: a culture of hard work, love, discipline and he’s having the city buy in like no one has (save Yeoman and even than it was constantly fluctuating). If you think what Herman is doing is going to be easily replicated your are deluding yourself. If you think he’s a con man doing a sales job, and we will just replace him, than I am glad you’re not the A.D. If his culture were so easy and effective, everyone would be doing it.

I love that he’s not afraid to show affection to his players.

Is UH bigger than Herman. Most certainly. But I truly believe this is our last chance. ESPN and others have successfully created a super D1, and without it we will suffer and be relegated to the lower levels.

So, we need to do everything we can to keep this regime in place. That’s my opinion. 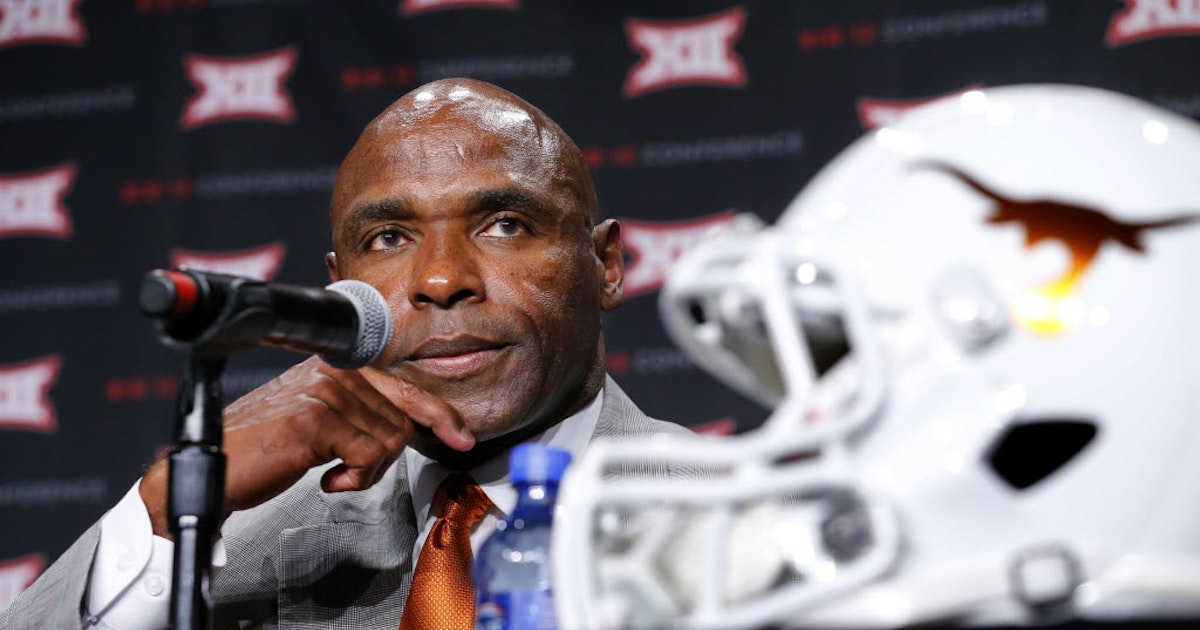 Fire Charlie Strong? Why the Longhorns letting go of their head coach in October...

AUSTIN -- On a day like Monday, when reporters looked for any signs short of circling buzzards regarding Charlie Strong's future, it didn't go...

Frankly, I’m not even sure where the pressure would come from anymore. Perrin is about as low-key as they come, and the president, Greg Fenves, got on a plane to help close the deal on Gilbert. Does that sound like a man ready to get rid of his head coach? As for the big boosters, no offense, but Red McCombs had no impact on Strong’s hiring. Why would he have any juice now? With Joe Jamail’s passing, a vacuum seems to have developed. Maybe Strong’s case leads someone or a cabal of sorts to fill it.

Nothing that Coach Herman does is gross. Seems like someone has an insecurity problem. What this man has done in less than 2 years at the UH is phenomenal.

It shouldn’t for the 2017 class. But 2018 and beyond should be interesting to keep a close eye. It would be nice if UH approaches
Tommy when ever the time is appropriate to give him a raise.

You’re right! UH has everything except being in one of the P5 conference.

Commitments and decommitments will be the tell. If Herman doesn’t plan to leave, you can bet your paycheck he’s on the phone with current commits and strong targets to reassure them. If current commits start decommitting, it’s likely because he hasn’t called them or refuses to say anything, so they don’t want to take the risk.

Judging from the Board of Regents meeting notice that was posted on another thread (http://coogfans.com/t/board-of-regents-meeting-oct-3-2016/3568/9), it sounds like they are already gearing up to give CTH another raise. I fully believe if CTH leaves, it won’t be because of salary. Ferttita will make sure of that.

Hopefully, the relationship between Herman and Godfather Ferttita, will help. In my honest opinion, especially without a Big 12 expansion, I truly believe that coach Herman will leave after next season. Hopefully, I’m wrong and he stays at UH longer but if you go by Sumlin’s tenured, he lasted at UH for three years.

Sumlin (like Briles) sold out for money. I tend to agree that if we don’t get into a P5, Herman will leave. But it won’t be for money, it will be for facilities, resources and the ability to compete at the highest level. I’m REALLY hoping there is a plan B in place if/when the Big 12 deal falls through.

If Herman leaves after two years, he is not the man he claims to be or the players believe him to be. Many think its OK to go for more money, as if it trumps anything and everything. I don’t think CTH has this issue. I think four years is a minimum time for a coach to stay, regardless of the lures; although, I have seen a number HCs roll out in much shorter times and I have no kind words for them. They are absolutely cruel to their players! Saying that’s just the way college football is doesn’t make it right or moral.

Tillman can only help - he’s been great

Regarding plan B, if Texas and the supposed five others plus BYU went West, wouldn’t everyone else need as good of home as they had before The implementation of Plan B , otherwise they would sue for damages

I guess I’m thinking The Oklahoma and Kansas schools could go SEC but what about West Virginia and Iowa State ? Don’t they have rights ?

I assume somebody with a sharp pencil at ESPN has already done this exercise. Is this a better option for the networks then just paying the big 12 not to expand