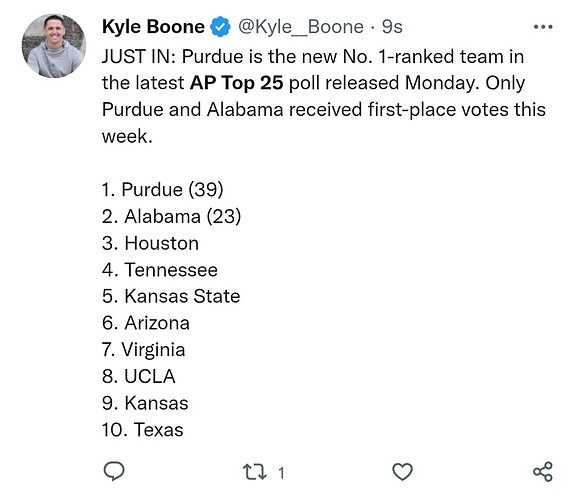 Lots of respect from the polls. The guys are going to have to find that dog in them, still going to get every teams best shot. Recover from the home loss and get on a winning streak again.

Yeah even tho everyone near the top lost this week we still took the worst loss from the field.

Honestly, props to the voters who recognized what happened yesterday. Self inflicted, uncharacteristic loss. It happens to everyone.

The goal now is to regroup and figure out how to get the mentality that every single game the rest of the way is our Super Bowl. We need to stop sitting back waiting for everyone’s best shot…we need to start coming out and giving our best shot out of the gate.

Like Kirby Smart said, we need to be the hunter, not the hunted!

Wow. Much better than i expected. I agree about our mentality.

So much chaos… we are actually in a great position to be back to #1 if we keep winning. We all know that Purdue will lose several more… and I think Bama might drop a couple too.

We are going to drop a couple more also fella

Let’s just win out from here!

Kent State not far behind.

I don’t know but maybe just maybe some of the voters watched the game?

We actually have quite a few Q1 wins and are 2-1 vs ranked teams but yeah, 5th woulda been more than fair imo.

Hopefully we win out but i do see another loss or 2 by conference tournament time.

We will be ready for the big dance though. It’s hard for other teams that haven’t played against us to be ready for us.

It’s hilarious how much the AP poll has changed with us. They used to hate us I remember coogs fans would be pissed off every monday because they never gave us respect. The polls used to just wait for us to lose so they could drop us way down

Yesterday sucked but take a breath.